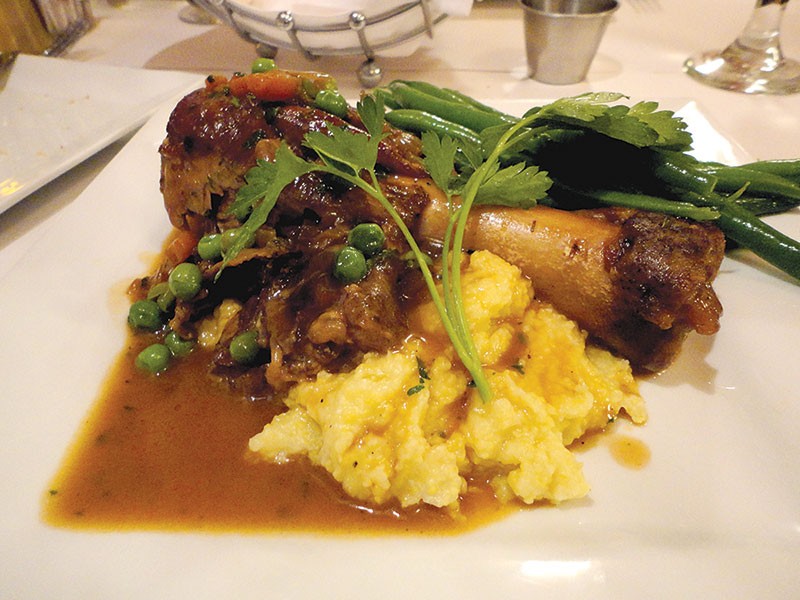 The menu of La Riviera reads like a beautiful sonnet, for which it has to thank 13th-century Italian poet Giacomo da Lentini: the menu's composition as a whole would not be the same without each one of its individual lines, and each line would be lost without its place with the others. There's no deconstruction or molecular gastronomy going on in the kitchen, just impeccable execution of Italian classics. It's a tribute to the culinary heritage of Italy to produce such good food by simply doing everything right, with attention to small details.

Organic radicchio salad ($9) is a wonderfully balanced starter. A generous portion of deep purple shreds lay like spaghetti, punctuated with bursts of flavor from gorgonzola and fennel, and topped with fresh, thinly sliced pears and just the right amount of balsamic vinaigrette. The bitterness of the salad isn't overwhelming, and provides the perfect setting for the sweet and salty accents.

The salad makes a good introduction for the spaghetti carbonara ($15), which is rich, creamy and overflowing with perfectly sized chunks of pancetta. If there were such a thing as too much pancetta . . . ah, but there isn't, so the thought stops there. This is the dish spaghetti was created for, and it's done justice here.

The beautiful fresco in the side dining room is a sight to behold. A depiction of Italy as viewed from, perhaps, a Tuscan villa, is more thought-provoking and inspiring than any bit of smartphone use in the lulls between courses. An outdoor dining space is decorated with climbing vines and bistro lighting, separated just enough from the main entrance to be romantic but not secluded. Just as the scenery sinks in, the main course arrives.

On a recent evening, one special was lamb shank over polenta. Like a good pasta, the extravagance of this dish was its perfect execution. The lamb was rich, not gamey at all, and perfectly tender—not falling off the bone, but melting in the mouth. Polenta served as a wonderful way to soak up the delicious gravy ladled gently over the dish. Hopefully, the roasted rack of lamb ($27) on the daily menu comes from the same supplier.

Dessert was the least exciting course, but that doesn't mean one shouldn't leave room for it. Classics like lava cake, crème brûlée and tiramisu are all priced at $7, and remind diners why they're such after-dinner staples with, again, near-flawless execution. The tiramisu was balanced, flavorful and presented beautifully, but the bottom layer of ladyfingers was just a touch oversoaked, while the middle layer wasn't quite soaked entirely through.

La Riviera Ristorante has become my first choice for Italian food in Santa Rosa. Though it may be more pricey than casual dining, the quality of the food, atmosphere and service make the experience well worth the money.