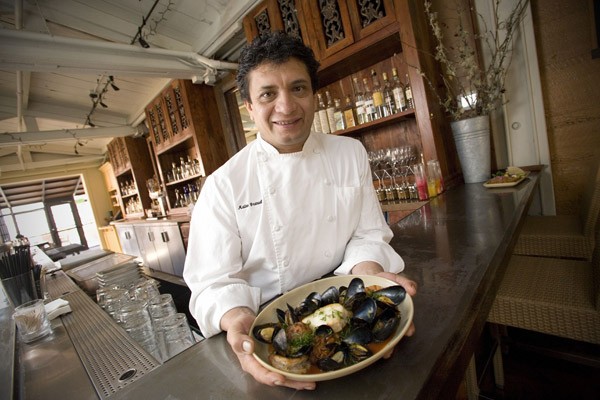 The opening of Mateo Granados' Cocina Latina in Healdsburg was one of the most anticipated debuts of 2011. Granados is a fixture in Sonoma County with his catering and farmers market stands; he's deliciously fused the food of his native Yucatan with seasonal ingredients sourced from local farms, ranches and waters to create a cuisine that's uniquely his.

So when he opened the doors to his first brick-and-mortar restaurant in downtown Healdsburg in September, I was eager to try it. And also a little leery. Mexican food doesn't often translate well into higher-end, sit-down places. I much prefer standing up and eating a taco-truck taco right off the griddle than paying more to have someone bring it to me. That was part of the appeal of Granados' modus operandi—inspired Mexican food served in humble settings.

With his restaurant, Granados' challenge was to appeal to fans who've come to love his food alfresco as well as those looking for a more refined, sit-down experience. I'm happy to report he threads the needle and delivers on both accounts.

The restaurant itself is attractive, located a few blocks from the town square across from the H2H Hotel and Spoonbar (Spoonbar "mixologist" Scott Beattie helped created the restaurant's excellent cocktail menu) in a storefront that once housed a second-hand store. Granados created the kitchen and bar from scratch. Scrap metal from old barn doors left in the back was used to create the restaurant's distinctive tables, and salvaged sheet metal formed the bar top. The walls of the long, narrow space are painted a warm, pale yellow and hung with lively art and collectibles from Mexico. There's a large outdoor dining area adorned with an olive tree and grape vines; the glassed-in kitchen is visible from the patio and adds an intimacy that devotees to Granados' cooking have grown accustomed to from his mobile kitchens.

Granados' food is classic Yucatecan cuisine, interpreted with ingredients from local farms and purveyors—call it wine country Yucatan. Yucatan food is one of Mexico's most distinctive, given its influence from Caribbean traders and its deep Mayan roots. It's lighter and more brightly flavored than the northern style of Mexican food that's more often represented in the Bay Area. Lime, habañero chiles, annatto seeds, cinnamon and olive oil serve in starring roles. The olive oil in Mateo's tortillas, tamales and guacamole is both a nod to the North Bay, with its abundant olive groves, and to the Yucatan, where Lebanese traders brought the stuff to the southeastern Mexican state centuries ago.

The menu namedrops various farms and ranches: Felton Acres, White Crane Springs Ranch, Preston of Dry Creek. On a recent night at Cocina Latina, I sat next to Granados' pig farmer, who proudly pointed to my pork carne asada and said, "That's my pork."

Pork is a good place to start at Cocina Latina. The aforementioned pork tacos ($8 each) are superb, deliciously caramelized on the outside and falling apart with succulent, porky richness. A dab from one of Granados' excellent habañero salsas is the perfect accompaniment. The chef has made a name for himself with excellent banana-leaf-wrapped tamales, and the suckling pig tamales ($10) are my favorite. They're made with olive oil instead of lard, but still pack a porcine punch.

The entrée-sized dish is ladled with Mateo's seemingly ubiquitous tomato-habañero sauce and baked rice—rice that becomes creamier and richer in the oven. Best of all is the cochinita pibil ($17), a well-known Yucatecan dish of suckling pig marinated in annatto seeds and slow-roasted inside a banana leaf. The meat is juicy, intensely porky and wonderfully flavorful. It's the best version of this dish I've ever had.

As good as the pork may be, my favorite taco is the lamb taco ($8 each). The well-charred hunk of lamb raised by Preston of Dry Creek is peppered with a crust of Yucatecan spices, cloves, cinnamon, Mexican oregano, chiles and garlic. (Granados says his mother sends him the spices from Mexico.) And if you're a fan of lamb, the lamb empanada is great, a lightly fried corn tortilla filled with tender chunks of lamb, sautéed chard and potatoes with some feta crumbled on top ($8). I ordered this dish twice.

From the list of specials, I loved the seafood costeña ($25), which is black and rock cod "meatballs"—Marin County mussels and fat shell-on shrimp aswim in that tomato-habañero sauce cut with a pork-chorizo broth. Thick, toasted bread slathered with bright orange-saffron aioli tops it off—think Mexican bouillabaisse.

The chicken in the pollo adobado ($19) is a bit dry, but the flavors of the peppery-sweet annatto seeds and great "sangre do toro" beans made up for it. The one dish that let me down was the pan de cazón ($18), a jumble of diced rock cod layered with puréed black beans, tortillas and tomato-habañero sauce. The fish flavors didn't meld with the beans and sauce, and created a soupy mess on the plate.

Instead of serving tortilla chips, an American invention, Granados has created a kind of flour tortilla cracker, long wedges of fried tortillas, dusted with sea salt and ground pumpkin seeds. They accompany Mateo's excellent guacamole ($4) or sikil-pak ($6), a great purée of pumpkin seeds, epazote and poblano chiles, and slow-roasted and caramelized squash cooked down into another excellent dip ($6). I didn't miss the standard tortilla chips at all.

Granados always seems to be in motion, moving between the kitchen and dining room, chatting up customers in his friendly, voluble style and sometime delivering plates of food himself. It's too bad the rest of the servers aren't as smooth. Drink orders were missed and delivered to the wrong people.

I asked for a recommendation from the bar's ample list of mezcales, but my server said he didn't know anything about them. After a silence, I suggested he ask someone who did know. He thought that was a good idea. And then there are the amusing moments, such as the busboy who used his cell phone as a flashlight to help identify a mystery ingredient. The best service I got was sitting at the bar.

Speaking of the bar, cocktails go well beyond margaritas and invite exploration. Two of my favorites are the Paloma Hermosa ($9.50) and the Merida agridulce ($10.50). The first combines Tres Agaves blanco tequila with elderflower liqueur, lime and grapefruit juice and agave syrup. Spend a buck more for the Del Maguey Vida mezcal upgrade to add a delicious smoky note to the drink. The other concoction blends more Tres Agaves blanco with Carpano Antica Formula and Aperol. It's served up, and makes for a classic cocktail. The wine and beer lists are solid, too.

I'll always have fondness for taco trucks and hole-in-the-wall taquerias, but Granados has created a one-of-a-kind brand of Mexican food that makes it a definite destination. There's nothing quite like it.