Meet Me at Pick's

After 90 years, Pick's Drive-In is still the heart of Cloverdale 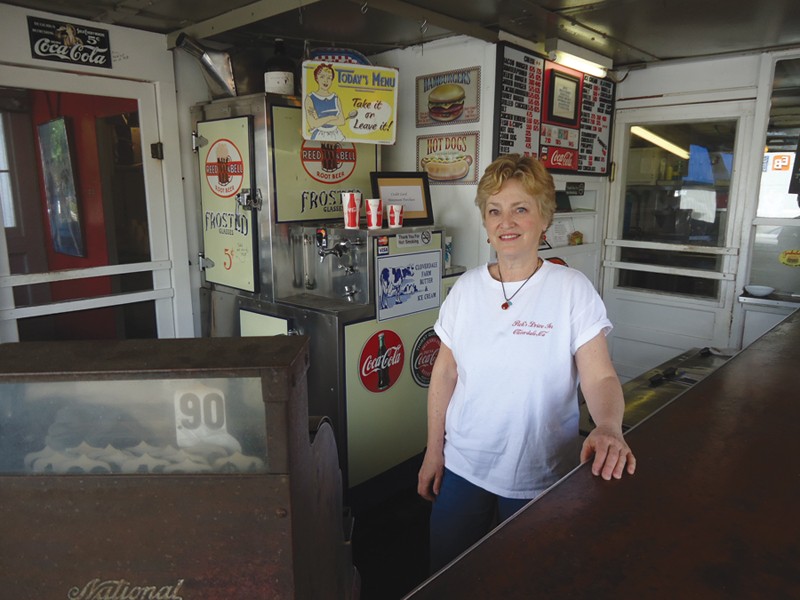 In 1984, Claudia Clow went to Pick's Drive-In, biking there with her teenage son, Todd, who had his eye on one of the cute counter girls. Though she'd lived in Cloverdale for several years, the Boonville native hadn't yet visited the iconic burger joint. As she and Todd enjoyed their milkshakes, Clow had no idea that in six years she'd become the next in a line of longtime owners wanting to keep Pick's alive.

Apparently, she's not alone. "I keep a file folder of people who want to buy it," Clow tells me on a recent afternoon, as we sit at a picnic table in the spring sunshine. It's easy to see why. At 3pm on a Monday, not exactly peak eating time, a steady stream of customers come and go, lingering over ice cream cones and baskets of onion rings at the outdoor bar.

Relics from long ago accent the classic scene at Pick's, now in its 90th year, like the coin-only cash register, built in 1917, and the original (though now defunct and no longer up to code) root beer mixer. Thin footrails run beneath the half of the bar without stools. There's even a sign advertising a frosty mug of 5 cent root beer, which Clow has amended with black ink that reads "Sold out as of 1928."

"I was tired of people asking for it," Clow says, laughing. "It just wasn't funny anymore."

Opened in 1923 as a "refreshery," the small white and green roadside stand served up the popular (and legal) Reed & Bell root beer during Prohibition. In 1950, Mayo and Johnnie Pickard, who had run the cafe at Santa Rosa's Greyhound bus station, bought the place and renamed it Pick's. After Reed & Bell went out of business, the Pickards painted over the original round orange and black sign, which hung outside until five years ago. "I never thought much about it," Clow tells me, "until one of my delivery guys who collects old signs took it home, removed all the layers of green paint and brought it back to me." (The restored sign now hangs behind the counter beneath the little-changed menu).

The fourth owner in the drive-in's 90-year history, Clow bought the property from Bernie and Barbara Day in 1990. At the time, she was working "lots of swings and graves" as a police dispatcher for the Cloverdale Police Department. For three years, she pulled double shifts, working the grill at Pick's until 3pm, and then answering phones at the station from 5:30 until 9pm. "Once, I answered the PD phone, 'Hello, Pick's,'" she admits, though the detective in the tight-knit town didn't mind.

While she loved dispatch work, Clow—who fielded calls about choking children, suicides, cars crashed into live wires—ultimately realized she needed to choose one profession. "In police work, lots of people get labeled as bad," she tells me, "but the truth is, not everybody's a bad guy."

A Cloverdale resident for almost 30 years, Clow is a repository of local legend and habits. She chats about everything from the time Art Linkletter showed up (her young employee asked, "Who?") to the Humboldt marching band that plays on the bar at Ruth McGowan's after the annual Citrus Fair parade every year.

From her perch behind the counter, Clow has watched the changing tides ripple through the town, for better and for worse. "I remember when that was the first stoplight you'd hit after leaving San Francisco," she says, pointing to Cloverdale Boulevard. This was back when Old Redwood Highway meandered through all towns north but Highway 101 zipped through all towns south—before the Cloverdale freeway bypass was completed in 1994, threatening to suffocate downtown, and before the Golden Arches appeared on the horizon and Cloverdale's downtown could still support local bookstores and shoe stores.

Though Clow admits that Cloverdale's downtown has faded (thanks, Starbucks and Subway), she also celebrates the addition of the farmers market and Cloverdale Arts Alliance, which hosts free Friday night concerts from May until August. And even though frozen yogurt and consignment shops have dragged the little town into the 21st century, Pick's, along with the Owl Cafe, Papa's Pizza, the Eagles Nest and the Hamburger Ranch, keeps it anchored in its historical past.

"Pick's is not any different today," says 94-year-old Al Furber, whose ancestors moved to Cloverdale in 1879, "than it was back in 1936"—the year he graduated from high school and went to work at the Standard gas station next door (now Chase bank). At that time, car-hops brought trays of food to people's windows, and Furber couldn't wait for his break to get a root beer.

Indeed, Pick's still looks much like it did 90 years ago. Though the menu has remained remarkably consistent over the decades, Clow has made a few changes, mostly to appease the health-conscious. In addition to replacing the deep fried chicken burger with a grilled chicken sandwich, she's added veggie patties, black-bean burgers, turkey burgers and the larger quarter-pounder to the repertoire. She also buys antibiotic and hormone-free beef from Niman Ranch. Like many, Clow loves the classic deluxe burger. "I'm tempted to eat one every day," she laughs, "but then you'd have to roll me home at night."

One thing that hasn't changed in 65 years is the famous red relish, which the Pickards bought from a local Santa Rosan who made the stuff in his garage with chow-chow and pickles. After he died, they procured the recipe from his widow. When I ask Clow if anyone's ever asked her for the recipe, she shakes her head. "No. Everyone knows it's top secret."

Clow and her employees still make six gallons of the relish at a time, which lasts longer in the winter but goes quickly during peak summer and fall seasons. Pick's closes during December and January, and reopens a week before the annual Citrus Fair. "During the winter, people say it's like a light has gone out downtown," Clow says. "Everyone is so happy when it reopens."

And by "everyone," Clow is talking about a wide swath, from diehard locals, like Jeremy from the post office who always gets a double bacon cheeseburger, and Andy who can't do without his french fries, to the farther-flung regulars who stop by on their way to and from the coast. The first time I ever ate there, I shared the bar with a group of Germans who were touring the country by motorcycle. More than one couple—including two people who'd met and courted there—has celebrated their wedding anniversary at Pick's.

But Clow's true prized customers are the newest generation, like her own grandchildren, who can still hop on their bikes and enjoy an ice cream cone for a buck fifty. "I really try to keep it affordable," she tells me, "for the kids."