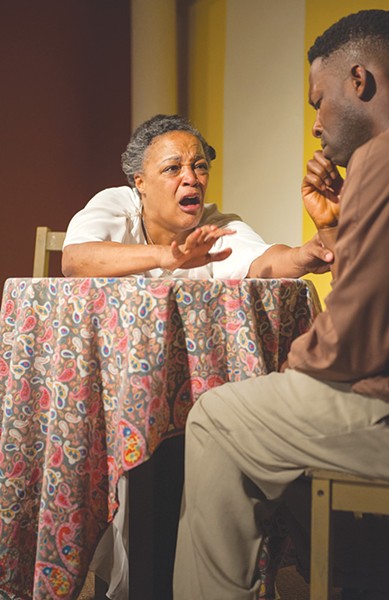 In Mona Mansour's intriguing but unsatisfying The Way West, at Marin Theatre Co., Mom (a forceful Anne Darragh) won't let anything get her down. Her Fresno home is being foreclosed upon. She has a mysterious illness. But as long as she can pick up a ukulele and sing songs about the early pioneers—survivors who sustained themselves on sheer grit and optimism—she'll get by.

Her daughters aren't so sure.

Manda (Kathryn Zdan), a high-earning grant writer, is appalled at her mother's ambivalence in the face of looming disaster, and Meesh (Rosie Hallett) is just looking for the next eBay scam to earn a few dollars of her own. Mom's friend Tress (a marvelous Stacy Ross) has taken what little is left of her friend's money to invest in a cutting-edge weight-loss business at a local strip mall.

From this promising set-up, a rather rocky, rambling story unfolds, one that frustrates as much as it entertains. Like the less fortunate pioneers Mom loves to sing and talk about, this one just doesn't have what it takes to make it all the way to the end.

In James Baldwin's marvelous Amen Corner (AlterTheater), Gospel music underscores the roiling emotions lurking beneath the surface of a small storefront church in Harlem in 1953. Directed with strong attention to emotional detail by Jeanette Harrison, this production unfolds, with minimal props and set pieces, in a cramped corner of the Body Kinetics health club, lending an appropriate sense of urban place to the story.

Sister Margaret (Cathleen Riddley, sensational) is the impassioned shepherd of her flock, leading by example as much as by the fire of her sermons. When her long-estranged jazz-musician husband Luke (Chauncey Roberts) suddenly appears, Margaret fears he might pull their son David (Rotimi Agbabiaka) from God's path. She never suspects that it's her congregation, gradually incited by what they've learned about their leader's past, she should be wary of.

Insightful and lyrical, with strong supporting performances anchoring the rising drama, The Amen Corner is sensitive, insightful and powerfully moving, and like a good gospel tune, it's impossible to get out of your head.