Seaside Metal is a pearl in Guerneville's restaurant row 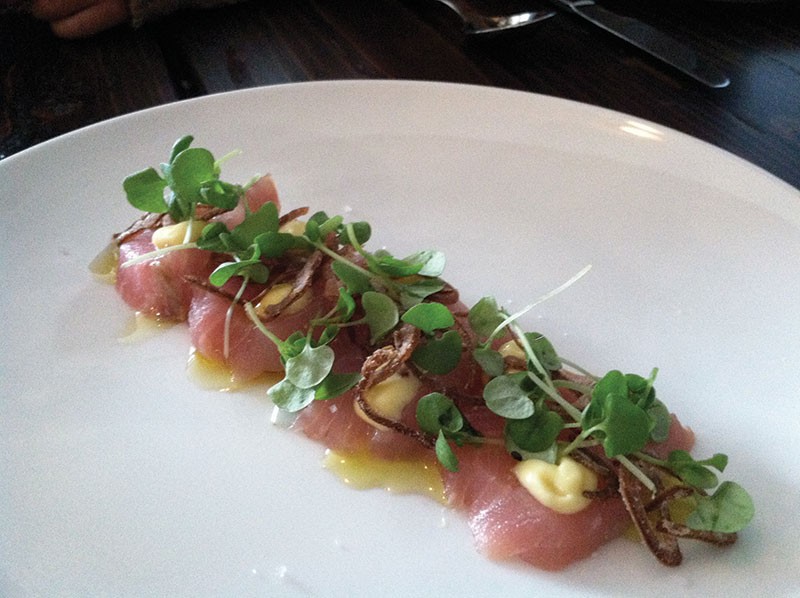 Luedke owns Guerneville's excellent Boon Food+ Drink, and together with Volpat opened the instantly popular Big Bottom Market a few doors down. They're a two-person economic-development department for downtown, particularly its food and wine scene. As part of their indefatigable boosting, they helped attract a ringer: Seaside Metal.

Mike and Tim Selvera are twin brothers who own San Francisco's beloved Bar Crudo, a modern oyster and crudo restaurant. The two were looking for a second location and had been spending time in Guerneville. As the story goes, Luedke and Volpat helped convince them the town needed an oyster bar. The brothers agreed, and Seaside Metal was born after a longer than anticipated gestation.

"We really saw this town growing and becoming this amazing little spot," says Sofia Laurin, general manager for Seaside Metal and Bar Crudo. Mike Selvera was so taken by Guerneville he moved to a house behind the restaurant.

Seaside Metal opened five weeks ago. The menu and concept are pretty much the same as Bar Crudo, but with more small plates and hot dishes. The spare, industrial-chic décor, robin-egg-blue walls and long, 12-seat marble-topped bar feel like a natural addition to G'ville's burgeoning restaurant row.

While Seaside Metal has oysters, clams, crab and other oyster-bar classics, the place is more like a seafood-themed tapas bar or izakaya with inspired small plates. Bar Crudo made its reputation with a creative take on crudo, Italian-inspired sashimi. Start there. My favorite was the yellowtail ($14). The sweet tang of the lemon curd is a perfect foil for the buttery fish. But then there was the great "fish and chips" ($14), alabaster slices of halibut paired with tiny housemade potato chips, caper-aioli and a finger-dabbed tomato sauce standing in for the traditional remoulade.

Other standouts were the meaty grilled sardines with green garbanzo beans and a scattering of diced preserved lemons ($13), and the outstanding smoked fish board ($15). Hickory smoke isn't delicate, and I wondered if it would overpower the smoked fish board ($15), but the smoke is used sparingly and to great effect. The chilled seafood emerges sweet and moist and perfumed with a wonderful smokiness that had me fondly smelling my fingers long after my meal. Be sure to get the superb seafood chowder ($8). It's deeply creamy, but lightened with a delicious, briny essence.

The one dish that that fell flat was the overwrought potato latkes ($15) with house-cured arctic char. The fish was fine, but the oily and salty potato pancakes and accompanying apple purée and plop of crème fraîche were uncharacteristically busy for the minimalist menu.

Actually, I didn't love the fried ricotta cheese fritters with chocolate sauce from the dessert menu either ($8). A straight-up churro would have been better. For something sweet, go for the impossibly creamy sorbets ($8).

With the opening of Seaside Metal, it feels like Guerneville's restaurant row has reached critical mass. It's a legit scene, and Seaside Metal is one of the pearls.