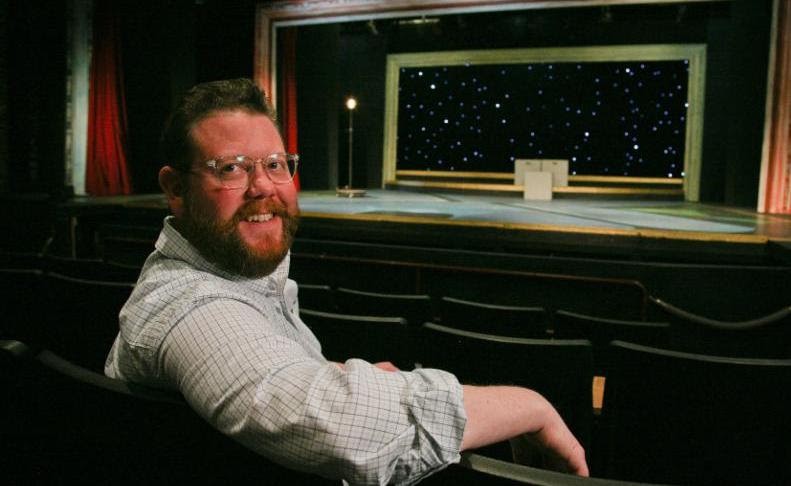 After seven years in Santa Rosa—making him the longest-serving artistic director in the company’s 13-year history—Miller has accepted a job at the University of Idaho, where he’ll serve as assistant professor of acting and directing, beginning this fall. Miller will officially depart 6th Street on July 13.

“Because of my in-the-trenches, real-world work as a theater maker,” Miller explained shortly after making the announcement in late May, “the University of Idaho has asked me to come out and share some of my knowledge, my failures, and my victories with their students. I’m very excited that I’ll be teaching the next crop of artists to be coming out of their theater program.”

According to Miller, who was married last fall, the university’s invitation was a surprise, but one that came at just the right time.

“Producing at 6th Street Playhouse is a dream job for a bachelor,” he says. “When I had all of me to commit to this organization, 24/7, it made beautiful sense. But [my wife], Meghan, and I are talking about starting a family, and the Playhouse has been on an upswing the last few months, in terms of better consistency in the quality of our productions, and in audience satisfaction and growth. So it’s just the right time to say goodbye, and go do something that allows me more time to be with my family in the future.”

Currently, Miller is directing what will be his final show with 6th Street, the Shakespearean musical Illyria (opening June 15), a longtime dream project for Miller.

“Everyone who knows me knows I’ve wanted to do Illyria for years,” Miller says. “So all things considered, it’s a pretty great way to go out.” During his tenure, Miller has greatly expanded the company’s educational programs. In recent months, working with the theater’s executive director Jared Sakren and the 6th Street Playhouse board, he’s enacted a number of new policies designed to strengthen the company’s somewhat rocky artistic reputation.

“Some of our shows have been great, and some have been not-so-great,” Miller admits. “We know that, and we know why, and a lot of it is because we’ve simply been trying to produce too many shows too fast.” One recent change is that in its upcoming 2018–19 season, 6th Street will present fewer shows in its two theater spaces. “We probably should have done this sooner,” Miller says, “but sometimes change takes a while. From here on out, thanks to some of the new policies I’m proud to have been a part of, the focus at 6th Street will be on quality over quantity.”

“The greatest thing about Craig,” says 6th Street board president Jeff Coté, “is that he took this job on with so much gusto. He kind of came from out of nowhere and immediately made the place his home. He’s done tremendous things for the playhouse, rebranding it in a lot ways. He’s had a very positive impact on the company, which will continue to be seen for years to come.”

Miller’s departure has given the playhouse an opportunity to adjust the administrative structure of the company.

“We won’t be hiring a new artistic director,” Coté said. Instead, some of those responsibilities will be taken over by Sakren, who will be responsible for maintaining quality of the shows in addition to choosing the shows for future seasons and selecting the directors and other artists.

Sakren will also be taking over the position of education director. According to Coté, whoever is chosen for the new position will not be directing any of the shows—a big shift from how things have been, with Miller directing one-third to half of the company’s productions.

“This is an evolution of how the company operates,” said Coté, “and we think it’s going to prove to be a very positive and constructive evolution.”

Instead of a new artistic director, Coté explained, 6th Street will create the full-time position of production coordinator – “Or possibly production manager, we haven’t completely decided on the title,” he said. That job would oversee the day-to-day details of all productions in both theaters, and do serve as stage manager for most or all of the shows in the larger G.K. Hardt Theater. Sakren will also be taking over the position of Education Director. According to Coté, whoever is chosen for the new position will not be directing any of the shows, a big shift from how things have been, with Miller directing a third to a half of the company’s productions.

“This is an evolution of how the company operates,” said Coté, “and we think it’s going to prove to be a very positive and constructive evolution.”

As for Miller, he describes his upcoming departure from 6th Street and Santa Rosa as an emotional roller coaster.

“On one hand, I feel elated and excited, and I can’t wait to see what lies ahead, and how this is going to change my life,” Miller says. “And at the same time, I feel extremely sad. I’m going to miss a lot of people