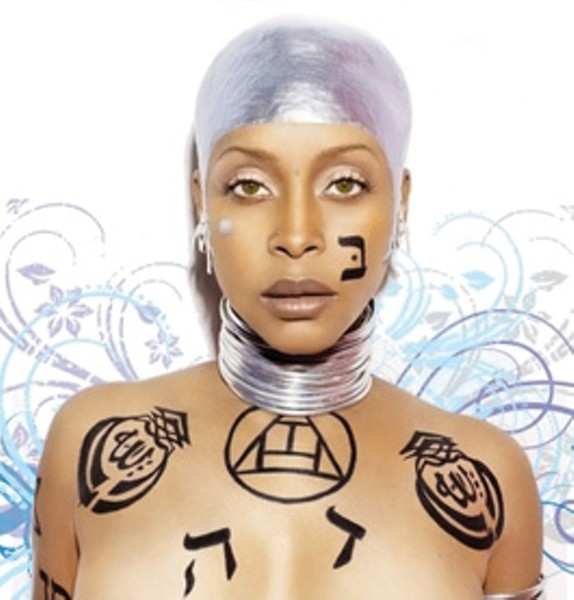 Since Erykah Badu burst onto the scene in 1997, she's been nothing short of ambitious. Even her classic debut Baduizm suggested a new school of thought, not just in its moniker but also its idiosyncratic views of life. But it took a decade for "the Queen of Neo-Soul" to graduate to concept-album-land with the critical smash New Amerykah: Part One (4th World War).

As the title suggested (and the amazingly militant Emek-created cover evoked), the album was a densely packed sociopolitical collection touching on everything from persisting inner-city woes to identity crises, both within the black community and the nation at large. A major step forward for Badu, its dark, bubbling funk—recalling Sly Stone's There's a Riot Goin' On—and digital textures buoyed a depth of cultural exploration only hinted at in her earlier works.

It's too bad this week's sequel, New Amerykah: Part Two (The Return of the Ankh), is such a letdown. It's evident from opener "20 Feet Tall" that Badu's ominous instrumentation and lyrical update of the ever timely Network speech are gone. With a gentle electric piano accompaniment, Badu sings in her feathery way about an obstacle. "You built a wall, a 20-foot wall, so I couldn't see," she says, "but if I get off my knees, I might recall, I'm 20-feet tall."

The theme of empowerment continues with the single "Window Seat." With its sparse backbeat and jazz trio, the track is the classic Badu formula, and thus very pleasing. But many were hoping for a deeper glimpse into the societal mirror that was so chaotically and beguilingly shown on Part One, even though that set was a throwback to the social consciousness of Marvin Gaye and Curtis Mayfield, Badu's oblique narratives and stylistic choices certainly made it a "modern" work. And needless to say, popular music with cultural meaning in addition to entertainment, didactic or not, is needed more than ever.

Thankfully, we get a taste of delicious murk in the 90-second "Agitation." With a manic David Sancious piano sample and harmonica riff, the vague colloquial ditty recalls Stevie Wonder's Innervisions. "Going through a thing now, finna pull this thang out, but it's against the law," sings Badu, followed by a Wonder-ful dramatic response: "What's the matter, is he drunk? / Yeah, he's drunk."

Still, the central theme of Part Two is an apt solution to a 4th World War, and one that's made the global rounds from ancient prophets to The Secret: only love and positivity can conquer hate and negativity. Go internal to conquer the external. While clichéd, Badu, as always, comes across as nothing short of genuine. The new, stellar Emek cover painting illustrates this enchantingly, with Badu au naturel rising out of an android Erykah's skull, surrounded by a tropical Eden and again wielding a tuning fork. But this time around, she summons love instead of fear, explained in spoken word on the mostly uneventful song "Love." Here the ankh, the Egyptian hieroglyphic character, means rebirth.

Motifs aside, Badu's songwriting talent is the album's saving grace. "Turn Me Away (Get Munny)" is a bubbly jam perfect for spring weather, and features Badu's playful baby voice, sounding like a soulful Tom Tom Club. A standout is the buttery smooth "Umm Hmm," which sounds like an old Mary J. Blige jam and could be the most catchy and conventional song Badu's ever recorded. Its soul sample anchors an effective chorus, with the overdone Kanye West production signature made charming again.

The epic, three-part, 10-minute closer "Out My Mind, Just in Time" is undoubtedly the album's highlight. "Movement I" showcases Badu's remarkable timbre in a stark jazz arrangement: "I'm a recovering undercover over-lover," she sings in full Billie Holiday mode, beside a lone piano. "Built a wall, 10 feet tall," she recalls, but with clarity, "now I laugh at it all."

As a whole, Part Two isn't as satisfying as its precursor, which actually benefited from stylistic seesawing. Although there are some tremendous songs here, a theme of love on an R&B record is about as innovative as a hip-hop album featuring the usual bravado, hedonism and materialism. While the yin and yang is complete, I'll cross my fingers for a trilogy.