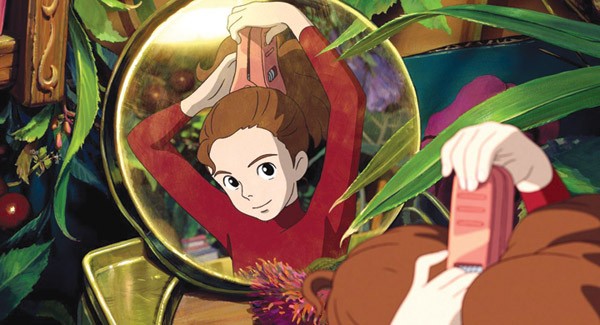 Hayao Miyazaki, famed Japanese filmmaker of such acclaimed animated movies as My Neighbor Totoro, Spirited Away and Ponyo, is in his 70s now. Though The Secret World of Arrietty, which Miyazaki co-wrote, is based on the children's tale The Borrowers, it seems like an older man's movie: slow, contemplative and ringed with loss.

The main male character is a young convalescent, bedridden as he waits for a dangerous operation. This mortality is discussed in blocky dialogue, adding an extra tinge to the seeming hopelessness of the friendship between the full-sized boy and tiny girl.

In keeping with Miyazaki's penchant for strong female leads, 14-year-old, five-inch high Arrietty desires to spy on the world of the "beans" (human beings), despite the warnings of her father, who endures perils to "borrow" food, and her mother, a little woman in constant terror of the consequences.

Miyazaki's Studio Ghibli excels at the charm of the miniature, and they've created a lambently green world for children over age five to explore—grass, bugs and foliage everywhere. They've also added another role model for young girls. With Hiromasa Yonebayashi as director, The Secret World of Arrietty counters Disney's prettified princesses with a brave-girl protagonist who ties her hair back, carries a straight-pin sword at her side and scales the cliff-like walls of kitchen cabinets.

Carol Burnett voices the harassing housekeeper who suspects something funny is going on; this maid is so broad-faced she looks like Alfred E. Neuman's aunt. Next to her, the funniest thing in the film is an overfed, bob-tailed cat who dislikes tiny people. Forbidden to hunt them, she looks balefully at them, a ringer for the old Orson Welles staring down an advertising director.

'The Secret World of Arrietty' opens in wide release Feb. 17.