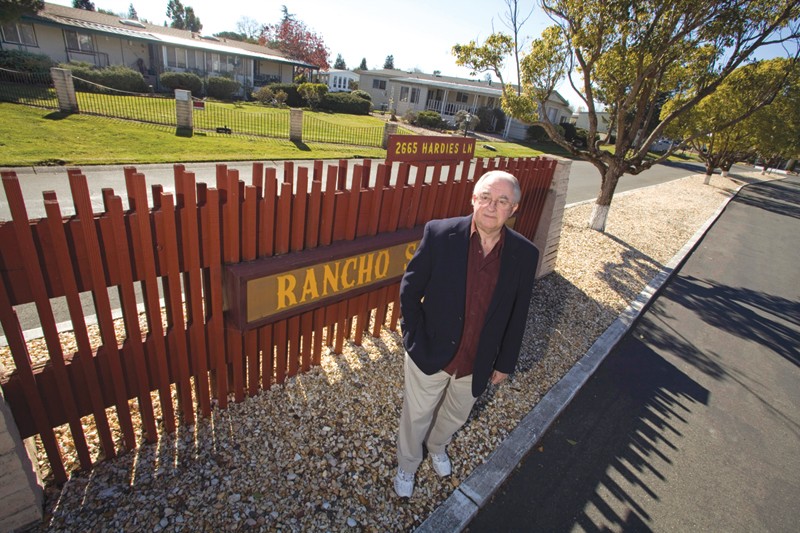 "[We] pleaded that the increase would cause significant financial hardship on our residents, and we hoped Rutherford would make concessions accordingly," says Don McLeod, president of the park's homeowners association.

Rutherford, which has offices in Mill Valley and Los Gatos, purchased Rancho San Miguel in April of 2012. The property's value was reassessed when sold, and subsequently the property taxes for the park increased. That increased tax burden is being passed on to residents.

At a meeting with park owners, residents and city officials in December, it was determined that the owners are within their legal rights to pass the new cost on to residents. "Before we ever went in to pass this through, we made a point of meeting with [residents] and contacting them," says Greg O'Hagan, one of the park's managers.

Under the rent-control ordinance, landowners are allowed only a 2.8 percent annual increase in rent. But the ordinance also allows owners to pass along "any new or increase in government mandated capital expenditures and operating expenses, including taxes."

McLeod's dispute lies in the hardship placed on park residents. Rancho San Miguel has the second highest maximum base rent of rent-controlled mobile home parks in Santa Rosa, at $655.60. The senior living community has many residents on fixed incomes for whom a $40 monthly increase can be hard to absorb, including several whose sole income is Social Security.

A similar scenario played out in San Jose in 1988, and the city denied the increase under wording in the ordinance which allowed the city to "take into consideration any increase in rent that results in financial tenant hardship." That decision was upheld by the U.S. Supreme Court.

Santa Rosa's rent-control ordinance has no such provision for hardship.

"It is most frustrating to know that Rutherford could elect to just write off the property tax as a business expense," says McLeod. Out of the 14 privately owned mobile home parks in the city, only three or four pass through property taxes to residents, he says. "What bothers us in principle is people say, 'Why should we pay property tax on land we don't actually own?'" says McLeod.

There is no correlation between previous charges and any new ones, says O'Hagan. "We don't know what the prior ownership passed through. I can't comment on what they did."

Marjorie Jackson of the city's housing development department met with park owners and residents in December after a petition circulated in the park attracted 111 signatures, and reports that both parties came to an agreement that an increase retroactive to April would be spread out over a longer period, which cut by about $7 per month the immediate increase to residents.

But McLeod is still left with a sour feeling, and believes a 450 percent increase in property tax assessments to residents is too much to handle at once.

Santa Rosa's 14 privately owned mobile home parks have a total of 2,008 spaces. Of those 14, two have undergone "condo conversion," meaning the residents own their individual spaces; Rancho San Miguel is not one of those. Out of Rancho San Miguel's 141 spaces, 124 are regulated under Santa Rosa's rent-control ordinance, which has been in effect since 1993.

Residents are now concerned that the switch from ownership by a family business to an investment firm will mean more expenses for tenants. "They're going through everything to maximize their profitability, and any little things they can pass through, they're going to do it," says McLeod. "It could all of a sudden not be an affordable place to live anymore."