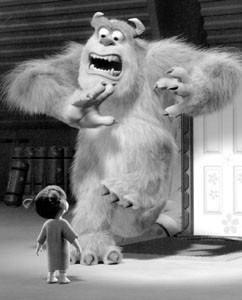 "THIS," REMARKS PIXAR'S John Lasseter, trying and failing to stifle a yawn, "has been a pretty long day." It's shortly before sunset on a warm Friday evening, and Lasseter-- Toy Story-teller turned full-fledged monster maker--is still at his Emeryville office, where he just can't stop yawning.

Not that anyone could blame him. With the imminent release of the new computer-animated film Monsters, Inc., and his hands-on involvement in this weekend's big charity premiere of the Pixar-Disney release in Santa Rosa, Lasseter is quite the busy guy. So no one will begrudge him a little weariness.

After all, it won't be yawns that Lasseter and company are spreading once Monsters, Inc. hits the theaters on Nov. 2. The Pixar people are confident that the only contagious parts of the eye-popping adventure will be the laughs--and the screams.

Monsters marks the first Pixar feature not directed by Lasseter himself. But as Pixar's vice president of creative development, the Sonoma resident still put some long hours into the film.

Based on an idea by director Pete Doctor, the film takes us deep inside the world of monsters. Monsters, Inc. introduces audiences to a big, hairy, purple thing named Sully (voice by John Goodman), who works with his one-eyed assistant Mike Wozinsky (Billy Crystal) to frighten sleeping children and collect their screams. Those high-voltage sounds are then converted by the pair's parent company, Monsters, Inc., into the energy that powers the monsters' cities.

"Thinking up things like that make my job more fun," he adds, then lets loose another yawn.

Adding to the fun of making Monsters, Lasseter says, was the simple-but-ear-shattering process employed in creating the screams that Sully and Mike inspire in their young "clients."

To get the actual recordings, the Pixar filmmakers brought in their own children to help out. "You put a kid in front of a mike and tell him to scream," Lasseter reports, "and you don't have to do anything else."

To create realistically screaming faces for the onscreen characters, Lasseter reveals that the animators frequently resorted to copying their own faces in mid-scream. There is a special room at Pixar--the "Mirror Room"--just for that purpose.

"One thing about animators," Lasseter admits, "they're always looking at themselves in mirrors."

When not looking in mirrors, Lasseter is looking ahead to Oct. 27, when North Bay humans will receive an early peek inside the Monster world--and more besides--at the Santa Rosa benefit screening of Monsters, Inc.

Including an auction of 10 closet doors painted by Sonoma County artists and a rare live performance by Randy Newman (a longtime Pixar collaborator, Newman wrote the movie's score), the whole event will benefit Valley of the Moon Children's Foundation (www.vomchildrensfoundation.com), which provides a safe haven for abused children. A similar event premiering Toy Story 2 raised over $200,000 for the organization, which is now raising money to build a larger facility.

"This event, we hope," says Lasseter, still yawning, "may put them over the top."

After that, before moving on to other films, Lasseter plans to get some sleep.

One can only hope there are no monsters in the closet to disturb him.

From the October 25-31, 2001 issue of the Northern California Bohemian.