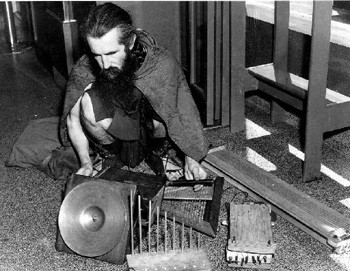 Rhapsodic: Louis Hardin, aka 'Moondog,' a blind composer and musician who seemed to prefer the street to the dais.

Of the thousands of CDs unleashed every month, there are always a few rare gems that represent high art from low places, sparkling like diamonds in the rough. Crazy though it may sound, this month's best reissue is from a blind, graying, dead street urchin in a regal cape and horned Viking helmet.

But American music has always originated in small, unlikely arenas. From a Harlem block party to a multibillion dollar industry, our music has always started low and, if it has any potential, been plagiarized and exploited by the requisite stepping stones along the swift, diluting catapult to fame.

Thus the innocent joy of discovering something pure and unravaged.

I have spent years in these kinds of pursuits and I often see my fellow scourers' judgment falter. I, myself, sometimes arrive at these obsessive ends; I'm currently in love with a disastrous Canadian noise band called Aids Wolf. But the first time I heard Moondog is fixed in time. I remember exactly where I was--I pulled the headphones tightly to my ears and closed my eyes. I had stumbled across something strange and beautiful from a unique musician whose lost musical output was long out of print. This month, that oversight is remedied with the release of Moondog: The Viking of Sixth Avenue (Honest Jon's Records), a fascinating compilation and easeful primer to the music of a true American original.

Moondog, a blind street musician who performed daily in a cape and Viking helmet on the corner of 52nd Street and 6th Avenue in New York City, started low yet never received the upward thrust his innocuously percussive music, self-described as "snaketime rhythm," deserved. Like Harry Partch, Moondog crafted his own instruments and wrote what could loosely be termed modern classical music. Unlike Partch, who traveled across the country hopping trains, Moondog stayed firmly planted at his Manhattan corner throughout the 1950s and 1960s, where passers by would either walk on in confusion or stop and listen with intrigue.

One of Moondog's early believers was conductor Artur Rodzinski, who extended a rare invitation to sit in on rehearsals of the New York Philharmonic at Carnegie Hall. Moondog would sit in rapt attention and absorb concepts of harmonic counterpoint which would later texture his then-sparse compositions. (Later, when Rodzinski left to join the Chicago Symphony, new conductor Bruno Walter asked that Moondog doff his cape and helmet while visiting Carnegie Hall. Moondog politely refused.)

Like fellow iconoclast Sun Ra, Moondog initially released records either on his own fledgling label or on similarly unknown labels run by friends. Sales were terrible. He recorded for Epic, Brunswick and even the jazz label Prestige. Sales were still terrible. Through some intervening twist of fate, he was signed to Columbia Records in 1969, where he was finally allowed to write for a full 40-piece orchestra and to explore the elaborate spectrum of his vision. Sales, again, were terrible.

Though Moondog's supporters included Benny Goodman, Janis Joplin, Charlie Parker, Igor Stravinsky and Julie Andrews, his music has been left to the dustbin of influence rather than championed on its own merits. The Viking of Sixth Avenue represents a mere cross-section of his original material: at his death in 1999, he had composed over 300 madrigals and 80 symphonies, along with hundreds of works for small ensembles, many of them unheard.

What's here, though, is a breathtaking blend of Eastern scales, Native American rhythms, jazz idioms and strict classical composition, notably the haunting, primitive "Theme and Variations" in 5/4 time, and the deep, probing tenor saxophone of "Lament 1." The many rhythm-heavy tracks, such as"Oasis" and "Rimshot," are a sampler's playground, and the closing 10-minute "Invocation" is a one-note statement of simplicity.

With The Viking of Sixth Avenue, Moondog's discoveries continue to unfold.