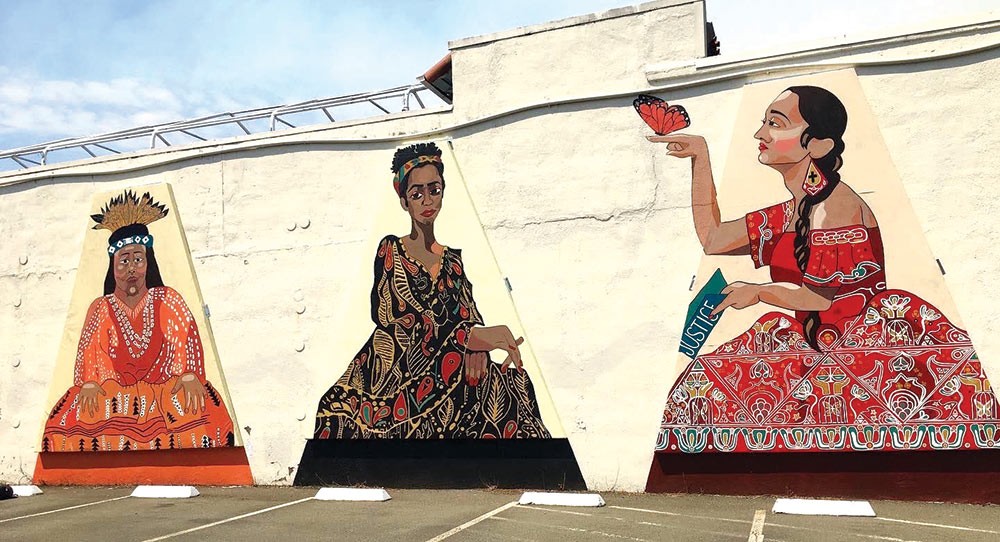 Santa Rosa, like other North Bay cities and towns, has been the focal point of numerous social-justice events and protests since the renewed Black Lives Matter movement began in June following the death of George Floyd at the hands of police in Minneapolis.

In addition to protesting police brutality, the demonstrations and gatherings in Santa Rosa have celebrated diversity, with an emphasis on supporting the North Bay’s immigrant communities and people of color.

That celebration is now visually realized throughout Santa Rosa in the recently launched SCAPE Mural Project.

The artistic endeavor has so far completed the large “Trinity Mural,” currently placed on the side of 3 Disciples Brewing Company at Mendocino Avenue and Ross Street; and the project recently put the final touches on an expansive community mural that can be seen along Fourth Street businesses downtown near Courthouse Square.

SCAPE (Sonoma County Artists Propelling Equity) is a grassroots collective of local artists who are people of color, and SCAPE murals feature portraits of Black Indigenous People of Color, or BIPOC, as well as portraits of inspirational leaders in Sonoma County.

SCAPE Mural Project’s lead artist is Rima Makaryan, a recent Montgomery High School alumni and first-generation Armenian immigrant, who also works on The Monarch Project, a Sonoma County group that makes art to tell the stories of immigrants and to empower the local community.

Other participating SCAPE artists include Féven Zewdi, a first-generation Eritrean immigrant, who states that the new murals’ purpose is to stir interest in the fight for racial equity and justice.

“My community takes up notable residence here in Sonoma County,” Zewdi says in a statement. “It’s an honor for me to give my best for my tribe. Through my efforts with SCAPE I hope to spark curiosity, social and political awakening that push for collective solution-building that will impact socio-economic improvements for BIPOC communities.”

The SCAPE Mural Project’s “Trinity Mural” depicts Bernice Espinoza, a local lawyer who advocates for racial justice and criminal justice reform; Rose Hammock, a community educator and activist who is Pomo and Wailacki; and Joy Ayodele, a local student activist.

“I am truly touched beyond words,” Joy Ayodele says about her portrait in the mural. “I am honored. Sometimes there are moments of discouragement and fatigue, so it’s really special to me to feel uplifted in this way.”

While poor air quality forced the mural organizers to cancel a planned unveiling on Fourth Street this past weekend, the art is there for visitors to see, and videos and other content will soon be available on The Monarch Project’s website. Additionally, donations to the SCAPE Mural Project can be made on its GoFundMe page.