It's gray and cold outside, but a bowl of smoky steamed mussels brings warmth inside 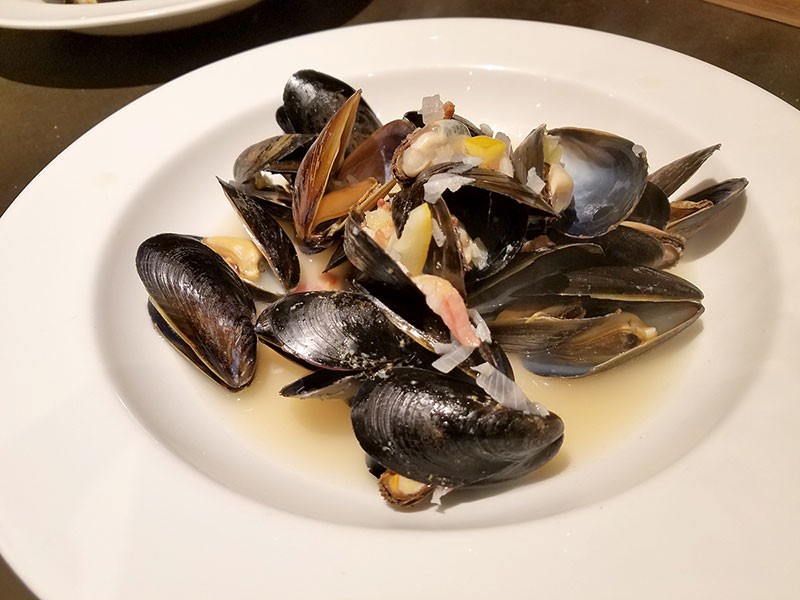 The gray days were getting to me. I know we need the rain, blah, blah, blah, but the cold, overcast weather had me feeling down last week. So I took to the kitchen.

You can't change the weather, but you can change what's for dinner. I've had enough chicken soup but wanted something warm, brothy and nourishing. I settled on a bowl of steamed mussels.

r in them—September to April. The rule seems to make sense if you are harvesting clams, oysters and mussels yourself. The non-r months are warmer, and shellfish are more susceptible to toxic red tide events—and are quarantined in California for that reason during those months. The warmer months are also generally when shellfish spawn. Spawning shellfish are milky, thin and less than delicious.

I considered heading to the coast and picking my own mussels, but though better of it. I'm all for a free lunch (or dinner), but harvesting mussels on your own requires a sport fishing license, and the shellfish can be gritty with sand unless you purge them with flour or cornmeal. Not a big deal, but I didn't feel like it. I was kind of mopey, remember?

Instead, I went to Santa Rosa Seafood, my go-to spot for seafood. The classic method for steamed mussels is to place them in a wide pan with a few glugs of white wine, a little water and some chopped garlic and shallots, and cook until all the mussels have opened. Traditionally, they're served with crusty bread and more white wine.

That's a fine method, but I improved on it. Instead of wine, I used hard cider. And not just any hard cider. I reached for Tilted Shed's smoked cider. It's subtly infused with smoked apples. If you can't find it, any local dry cider will do.

To up the smoky quality of the dish, I added crisp diced bacon. And because my backyard Meyer lemon tree is loaded with glorious, glowing yellow fruit right now, I tossed in some chopped lemons to balance the richness of the dish. The whole thing took about 10 minutes. I felt better after the first bite.

3 to 4 slices of lemon, roughly chopped

Clean mussels by submerging under water, discarding any that are open. Place in a wide pan.

Cook bacon until crisp, but not too crisp. Drain, blot off extra fat and set aside.

Add cider, water, bacon, shallots, garlic and salt to a wide pan. Cover and heat over a medium flame until all mussels have opened, discarding those that haven't. Add butter and let it melt.

Serve in wide bowls and sprinkle with parsley.