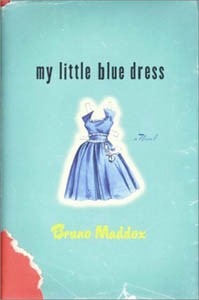 'My Little Blue Dress' remembers a wild life that never was

BRUNO MADDOX revived the satirical Spy magazine to "within spitting distance of its former glory" but then "accidentally drove it out of business," as the author's note on his latest book explains. But that adventure still left the young English writer the entire spectrum of 20th-century literature to spoof, and he does so hilariously in My Little Blue Dress (Viking; $24.95).

This bogus memoir of a 100-year-old Englishwoman dying in New York's Chinatown isn't entirely a joke. Maddox explores the opportunities for 20-somethings in a world where "[h]istory has ended and we don't need people to have fixed identities anymore because the world is now finished, there's nothing more that needs doing."

If you don't get the joke from the cover, which evokes self-published memoirs by people you've never heard of, or from the contents page, "1910-1919-Puberty + War: knits blue dress to kill time while deflowerer is away at war," you surely will by page 19, when the 5-year-old narrator tells a panel of rustic May Queen judges "a community is a great deal more than just a bunch of people 'oose 'ouses are quite close by each other, it's . . . it's an organism." Right. That's just how you'd expect a tot in an English village to speak in 1905.

The fictional Bruno Maddox, desperately trying to fake the memoir of a woman born on Jan. 1, 1900, is a self-obsessed young man in search of fortune, fame, attention-getting outfits, and a creative project with an irresistible gimmick.

As the reputed 100-year-old narrator moves from decade to decade, she drifts into literary styles from D. H. Lawrence to Anaïs Nin, Hemingway, and more. Of course, she's not really writing this, you remember, and the fictional Maddox knows next to nothing about history, and less than nothing about women. So, in the '30s we find our heroine hidden away as a reclusive, Mary Poppins-style nanny: "Beyond the playroom windows, the nineteen thirties were whizzing by without entangling me one iota in their complexity."

In an early romance, she constantly sidesteps her lover's whimpers that they need to talk about the relationship. Later, in Paris, she becomes a lesbian, since the author does know something about being attracted to women.

It's a brilliant send-up, not just of literary styles, but of lifestyles: the post-WWI artistic stampede to Paris, the tidal wave of appliances in '50s America, Andy Warhol, hippies, the money dances of the '80s and '90s.

It all starts because the fictional Bruno stumbles into caring (well, sort of) for his dying neighbor in a very nasty cheap apartment. He soon discovers a contract for her memoir--a million-dollar contract, with an imminent deadline. Thus the mad dash to write something for which he is totally unequipped.

Along the way, he worries about himself--is he suffering from the burnout of Caregiver Syndrome? No danger there. He feeds his charge a bowl of guacamole for supper and disappears for days at a time, pursuing his nonexistent career and a probationary girlfriend.

The two young/old male/female voices blend eerily, until finally it's tricky to know which mind is speaking--or to interpret the note that it was "stupid stupid stupid" to kill the old woman.

Are we to take this literally? Or is killing the old woman a metaphor for abandoning old values, hard-won life lessons? With the macabre joke, is Maddox telling us that history and old folks have something to offer the trendy young?

From the July 26-August 1, 2001 issue of the Northern California Bohemian.