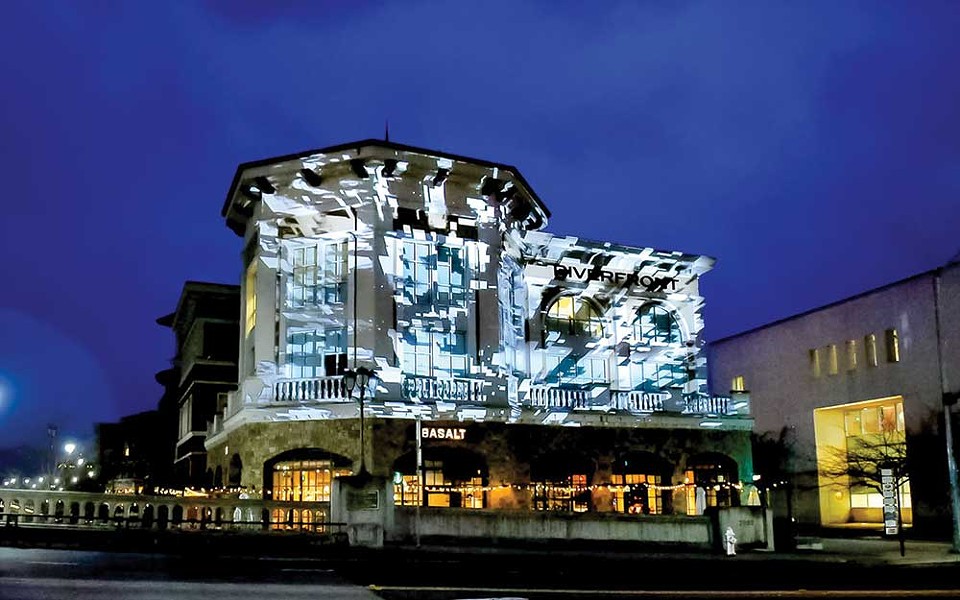 If one can say that "all the world's a stage" in a theatrical sense, then it should also be said that all the world is a canvas for visual artists—especially if those artists work in the medium of light, such as the projected works that adorn several historical buildings throughout downtown Napa during the nine-day Napa Lighted Art Festival, running Jan. 11–19.

Hosted by the City of Napa's public arts division, the city-wide evening arts-walk event features original artwork created by local and international artists shown on buildings and in art installations at a dozen locations.

"There is a lot of spectacular work that we are gearing up for this year," says Napa Public Art Coordinator Meredith Nevard. "The festival theme for this year is 'Renew' and the artwork represents or expresses concepts such as to restore and rehabilitate our physical world and re-establish and re-connect to each other."

This year's lineup of artists includes seven international artists and four U.S. artists; three of them returning artists and the rest chosen by an art committee from a pool of submissions.

At the First Presbyterian Church on Third Street, British artists Ross Ashton and Karen Monid present "First Light," which visually represents a 24-hour day as seen through shades of natural light and accompanied by a contemplative soundscape. Nearby, at the Napa Square on Second and School streets, fellow U.K. multimedia artist Rebecca Smith and her group Urban Projections presents "Fault Line," which uses bold patterns and moving color to explore the transfer of energy within the Earth's geology.

From Israel, the OGE Group specializes in artistic architecture projects with creative light designs, such as the interactive light art installation "Angels of Freedom," showing at the CIA at Copia on First Street. The installation invites participants to be visually turned into angels with the help of projected light.

The festival also includes several artist's talks, historical tours and special events such as the Night Bloom hot-air-balloon display at Oxbow Commons on Jan. 12 and 19, and the Lantern Parade—where the public will create their own lanterns and parade through downtown—at Veterans Park on Jan. 17.

"One of our goals here is to make it known that Napa is an up-and-coming art scene and to push the boundaries of what kind of art we can house here," says Nevard. "It's a once-a-year festival, but a once-in-a-lifetime experience to see some of these artists."