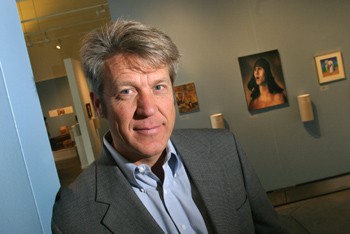 Talk of the New

Like any dynamic institution, the Napa Valley Museum finds change to be the only constant. Founded in 1972 and originally housed in Napa's former high school, the Vintage Hall, the NVM is currently ensconced in designer digs on the grounds of the California Veteran's Home in Yountville. Part one of a planned 40,000-square-foot expansion is complete, a 10,000-square-foot architect-driven building that reflects the silos and metal siding of the Napa Valley's agricultural heritage. The other square footage will either be built to plan, adjacent on the grounds, or will exist separately--perhaps in downtown Yountville, perhaps in downtown Napa, perhaps . . . hmmm. Change. It's constant.

Napa Valley Museum executive director Eric Nelson takes the impending upheaval in stride. The former executive director for the Sonoma County Museum, Nelson moved to his current post some six years ago, settling back in the valley where he grew up, and taking the reins of the museum just as its newest incarnation was finished.

In the cool of the structure's bottom floor is an extensive and interactive winemaking exhibit allowing visitors to test their enological knowledge, design their own blend and even check the best grape-growing temperatures for various varietals. The main exhibit hall upstairs is currently hung with original work from area artists in anticipation of yet another fundraiser--fundraising perhaps being the only other constant for any dynamic institution--and a special area is devoted to a new exhibition exploring the history of Jews in the Napa Valley.

Because the old brick high school building that formerly housed the museum was declared an earthquake hazard, the NVM has long been very adept at getting its message and mission outside of its four walls. Developing an extensive trunk show that allows staff to ably move museum pieces around, the NVM serves some 5,000 school children each year, according to Nelson's best estimate. Add to that the museum's busy roster of public activities, its assiduous outreach to residents who may not quite have made it up the hill to the Vet's Home yet and its careful eye to better serving the large Hispanic community of the Napa Valley, and suddenly we're handing out Boho Awards.

Seated in the dim morning light of his basement office, Nelson pauses when asked which of the programs he's overseen during his tenure with the museum has excited him most. "We've done so many wonderful things that it's hard to pinpoint," he says. "The residents of the Napa Valley are our core base, from the wealthiest vineyard owner to the guy who picks the grapes for that owner and who may only live here part-time. We've had the governor of [the Mexican state of] Hidalgo here giving a presentation.

"I've really enjoyed our relationship with Hidalgo," he says, explaining that many of the valley's residents are from that state and the state of Guanajuato, whose governor has also given presentations at the museum. "It's been great to see the community embracing the museum."

With a mandate to reflect the art, history and environment of the Napa Valley, Nelson is always looking for different ways to keep things fresh. Possible thoughts include mounting an exhibit by Guanajuato native Diego Rivera, developing a strong and "dramatic core exhibition" and establishing a room for changing shows solely devoted to contemporary art.

"We just did a really exciting exhibit of contemporary art, lent by collectors," he says, casting back on recent shows. "We had a representative work of nearly every major artist of the 20th century; we had 65 masterpieces. What made it so special was that it was an opportunity for people to share their passion with others."

With a member base of roughly 1,500, the NVM looks to the future, regardless of where it will expand. Nelson says that he's always looking for ways to make the museum "more of a populist organization. We want to be able to popularize the fields of history, art and science in this valley, to reflect this community historically and artistically. The hope is that this leads to a sense of stewardship, that we'll all end up being better at caring for this place."

Considering his museum's "core essence," Nelson says, "We're about celebrating the valley. What a wonderful place this is! And I'm not," he chuckles, "just saying that because I grew up here."

From the September 28-October 4, 2005 issue of the North Bay Bohemian.