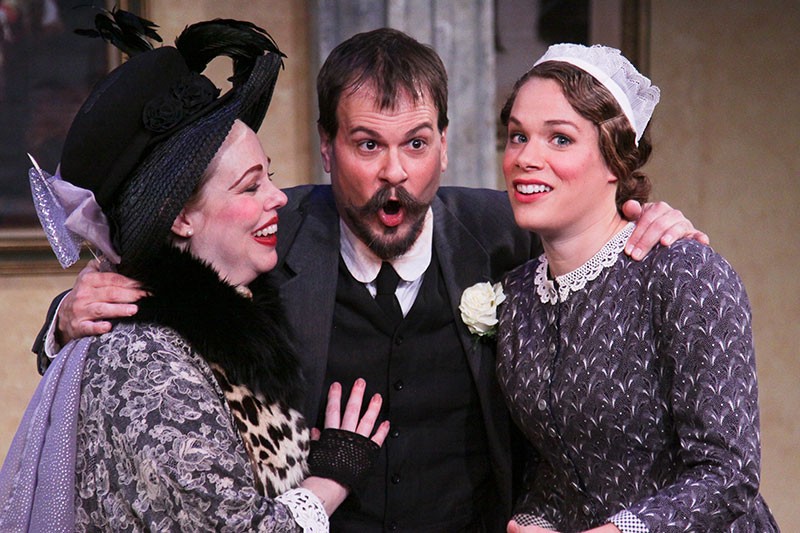 Mozart's comic opera The Marriage of Figaro was composed 228 years ago, and was based on a play so openly and outrageously sexual that it was banned in Vienna.

Though Mozart, with librettist Lorenzo Da Ponte, toned down the licentious stuff just enough to slip it past the censors of the day, the story retained much of its naughty nature, and became an enormous hit among opera-goers of the 18th century. Of course, what once was considered shocking is often only moderately so today. That said, The Marriage of Figaro, even in 2014—as evidenced by Cinnabar Theater's hilarious and at times ingenious staging—is still pretty darn filthy.

And it still sounds great.

The 17-piece orchestra, under the crystal-clear direction of Mary Chun, nails the rousing (and instantly familiar) overture, and does wonders with Mozart's playfully intricate score. The principal singers (many of them professional opera talent with New York, San Francisco and even Carnegie Hall experience) are also marvelous actors.

Under the unceasingly clever direction of Elly Lichenstein, the cast, including a large ensemble of local veterans, is given a string of funny, silly, antic, outrageous and delightful things to do, including some inspired physical comedy. This is definitely not one of those "stand there and sing" kinds of operas. And with a sharp English translation by Jeremy Sams, the jokes in the libretto land with precision, ease and pitch-perfect timing.

Figaro (an inspired Eugene Walden) is a servant in the household of the morally flexible Count Almaviva (Christiaan Smith-Kotlarek), who's married to the beautiful, steady-hearted Countess Rosina (Bharati Soman). On the day of Figaro's wedding to the countess's maid, Susanna (Kelly Britt), a series of outlandish coincidences and calamities occur, most of them having to do with someone maneuvering furniture and circumstances in order to end up sleeping with someone.

In four cleverly coordinated acts, the duke attempts to seduce Susanna, who conspires with the countess and Figaro—and the count's deliciously randy yet sincere page Cherubino (Cary Ann Rosko)—to exact their comic revenge. Subplot upon subplot leads to some surprise twists and the requisite happy ending, all layered in and around Mozart's gorgeous music—and the occasional erection joke.

Still as smutty after all these years, and just as irresistible, Cinnabar's Marriage of Figaro is scandalously good fun.