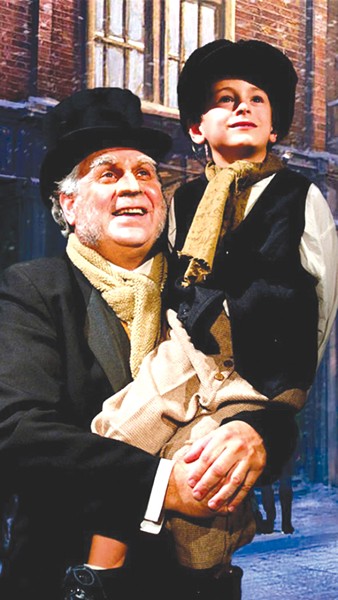 From new faces in company management to a new face on the company logo, a number of Bay Area theaters have been introducing the "new kid in town," and they aren't just humming an old Eagle's tune.

At Cinnabar Theater in Petaluma, Diane Dragone, formerly of San Leandro, has just been selected to replace executive director Terence Keane, who departed last June. Since then, Stephen Hamilton has filled in admirably, and was the one to officially introduce Dragone to Cinnabar sponsors and press at a pre-performance event in October. Originally from New York, Dragone has worked with Teatro ZinZanni, San Francisco Classical Voice and the San Leandro Performing Arts Center.

"Cinnabar has an incredible diversity of artistic performances, and it will be my job to make the community more aware of that," Dragone says. "Petaluma is experiencing a lot of growth, with new people coming in all the time, so there are new people to tell about Cinnabar. For years, it's been the 'best kept secret' in the North Bay. I'm looking forward to being a part of making it a lot less of a secret."

Meanwhile, at 6th Street Playhouse in Santa Rosa, Jared Sakren has been hired as the new executive director, a position that will work side by side with artistic director Craig Miller. Sakren—who's been the artistic director of Arizona's Southwest Shakespeare Company for over a decade—comes to California with a stellar reputation as a theater professional and fundraiser.

"Jared is awesome," Miller says, "and with him taking on a lot of the development and financial matters, I'm going to be able to focus on building the artistic and aesthetic strengths of the organization."

In addition, 6th Street has recently hired Steven Piechocki as the company's new technical director, a position that has gone empty for nearly a year. An alumnus of the Texas Repertory Theatre Company, Piechocki served most recently as technical director of the Old Lyric Rep in Logan, Utah.

"Until now, without a technical director," Miller says, "we've been piecemealing our sets together using local contractors, often not achieving the full potential of the set designs we've envisioned. With Steven, we've got a fully vested team player, and he's already proven to be a huge asset."

And finally, Marin County's Ross Valley Players has made a major change as well, introducing a new barn-themed logo after over three decades of being identified with the previous one. The beloved company has been doing a lot of exciting artistic experimentation of late, and the new logo—bold, simple and fun—effectively reflects the changing face of one of California's oldest continuing theater companies.