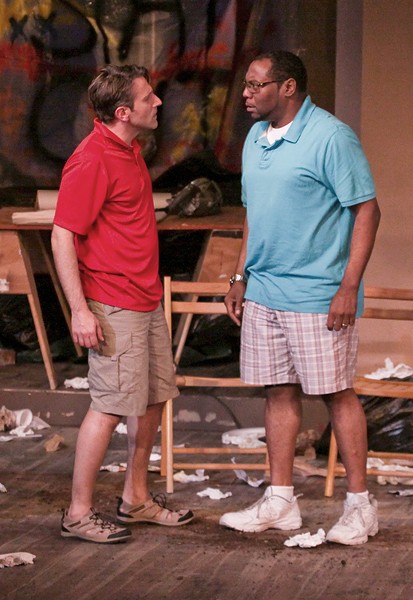 One need not have seen Lorraine Hansberry's 1959 play A Raisin in the Sun to appreciate the setup in Bruce Norris' brilliant 2012 Pulitzer- and Tony-winning comedy-drama Clybourne Park.

Taking place immediately following the events of Hansberry's play, Clybourne—running through Jan. 25 at 6th Street Playhouse—is a clever, insightful, frank and frequently shocking examination of the racial divide in America. Hansberry's play, which gave many theater-going white folks their first glimpse into the lives of Africa-American families, takes place in a poor, Southside neighborhood of Chicago, where the black Younger family is preparing to move to a house they've just purchased in the all-white neighborhood of Clybourne Park. At the end of the play, Karl—a representative from Clybourne Park—visits the Youngers, attempting to bribe them into selling the house back, which they ultimately refuse to do.

In Clybourne Park, grippingly directed for 6th Street by Carl Jordan, the action takes place in the house the Youngers have purchased. The house is half-empty, its contents packed into cardboard boxes here and there—effectively staged on the nicely detailed set by Ronald Krempetz—as its white residents Bev (Jill Zimmerman) and Russ (Mike Pavone) are fixing to move out of the area. When Karl (Jeff Coté) appears, having just come from the Youngers, Russ is committed to keeping the black family out.

The escalating conflict, which pulls in the young minister Jim (Chris Ginesi) and Karl's deaf, very-pregnant wife Betsy (Melissa Claire), takes place in the presence of Russ and Bev's longsuffering housecleaner Lena (Serena Elize Flores) and her husband Albert (Dorian Lockett), who gradually insert their own opinions about the callous racism they are witnessing.

Then, in the play's boldest move, the story leaps 50 years ahead. The Younger's home is now condemned, soon to be demolished following years of drug-enhanced neglect in the once depressed, now gentrifying neighborhood.

The same supremely strong and flexible cast appears again, now as contemporary characters, gathering at what remains of the house to discuss the details of what kind of house can be built on the same spot. The witty dialogue is riveting, raw and real, as the characters reveal the prejudices still lurking below the surface, demonstrating with humor and candid transparency that the more things change, the more they remain the same.