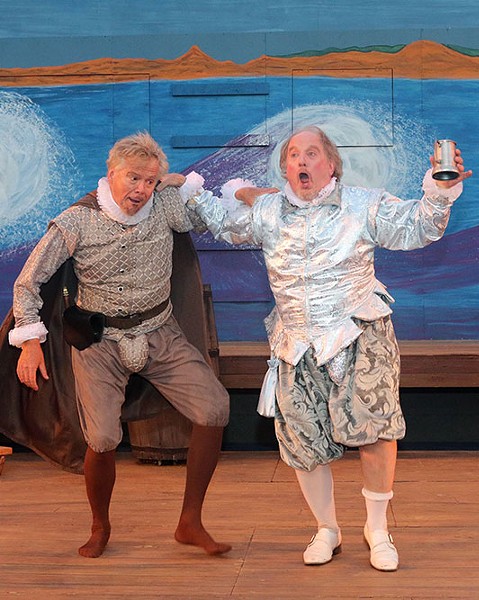 But "in Twelfth Night," says actor Michael J. Hume, "our job is just to have as much fun as possible, to establish a spirit of relaxed hysteria and to have a great time. And we are. The spirit of fun, mirth and misrule are definitely there. We're having a ball. I adore this play."

"I've known Robert and Lesley Currier forever," he says. "But I've never been able to perform here because I've had a summer gig in Ashland since 1992."

This year, however, Hume found himself with his first free summer season in two-and-a-half decades, after appearing in a production of Pericles at the renowned Guthrie Theater in Minneapolis. Committing to Pericles meant Hume would be unavailable for Ashland's 2016 season, and when the Curriers learned he'd be gig-less this summer, Lesley immediately offered him the role of Sir Toby Belch.

Having played that part twice already—once as a youth at the American Conservatory Theater and six years ago at the Oregon festival—Hume said he'd rather take a crack at Sir Andrew, one of Shakespeare's most complex comedic creations.

"I honestly had no idea how I'd play a character like Sir Andrew," he says. "It actually scared me a little. Lesley said, 'Michael, if Sir Andrew would make you happy, then you can play Sir Andrew.'"

Hume admits that, compared to the relative opulence of the Tony-winning Oregon festival, doing Twelfth Night on the Forest Meadows stage at Dominican University is a production that's a bit less fancy than he's become used to.

"At OSF," Hume says with a laugh, "if my character needs a handkerchief, then wardrobe gives me 12 or 15 handkerchiefs. At Marin Shakespeare, someone says, 'Hey, Michael, do you have a handkerchief you can use?' It's a mom-and-pop operation . . . a bit rough-and-tumble.

"But as actors," he adds, "we all come from rough and tumble. Working here, doing this show, it's a great reminder of what I got into theater to do in the first place—and it's marvelous."