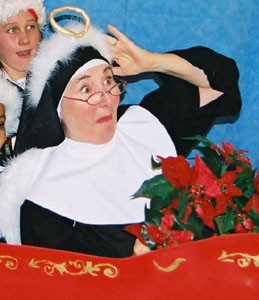 While sequels may be the bread and butter of Hollywood, they seldom ever work in the theatrical world. One would have to think long and hard before recalling more than a couple of theatrical sequel successes, though there have been numerous notable failures. The dreadful Annie sequel, Miss Hannigan's Revenge, springs readily to mind, for example.

It should then seem a miracle of Moses-like proportions that playwright Dan Goggin, having struck gold with the 1985 musical comedy Nunsense--the second-longest running show in Broadway history--has followed it up with no less than four frequently performed nuns-and-naughtiness sequels: Nunsense II: The Second Coming; Sister Amnesia's Country Western Nunsense Jamboree; Meshuggah-Nuns; and Nuncrackers.

Yes, the whole Nunsense canon has become to semiprofessional and community theater what The Nutcracker is to every ballet school in the country: a cash cow of mind-boggling proportions. Unlike The Nutcracker, however, the Nunsense shows have not yet been done to death. With their signature mix of sweet silliness and amiably off-color tomfoolery, Nunsense and its sequels still bubble along with a sense of freshness and fun that is only heightened when performed by the right cast and company.

Now, Hoochie-Doo is back in Sonoma with Goggins' Christmas portion of the Nunsense franchise, Nuncrackers. Co-directors Vicki Martinez and J. Anthony Martin have thankfully brought the same cast back as the unpredictable Little Sisters of Hoboken. (Well, almost all of the original cast is back; poor sister Mary Leo--the nun who dreams of being a dancer--has been written out, with the character sustaining a backstage injury early in the show and never actually appearing.) A new addition is the visiting priest Father Virgil Manly Trott, played by Scott Maraj.

You need not have seen Nunsense to appreciate Nuncrackers. The pertinent information--that the Little Sisters have lost 52 of their order to botulism, can't afford to bury all 52, but become rich when Sister Mary Amnesia remembers who she is and is finally able to claim the Publisher's Clearing House prize she'd forgotten to pick up--is gracefully interwoven into the new show's text. With the proceeds from the sweepstakes, the nuns have constructed a television studio in their basement and are launching their very first Christmas TV special.

Things go wrong from the beginning. Following a rousing opening number ("Christmastime Is Nunsense Time"), Sister Leo's injury occurs, threatening to scuttle an attempt at The Nutcracker ballet (mistakenly introduced by Sister Amnesia as The Ballbreaker ballet), complete with a strong cast of children who reappear to good effect throughout the show. A burglary has apparently also taken place upstairs in the living quarters, and all the nuns' Christmas presents have been taken.

But the sisters soldier on.

As in the original, there is an appearance by the Nun Puppet and even the traditional Nunsense Secret Santa ceremony, in which audience members are given presents as Sister Amnesia runs a side-splitting commentary. For example, after ascertaining that the man seated beside a lucky gift recipient was her husband, the beaming nun handed over a two-inch ruler, saying, "It's really handy for measuring short little things." As another patron opens a scratch-n-sniff nativity ornament, Sister Mary Paul helpfully warns, "I have been in a barn. You probably don't want to scratch that."

That warning aside, you probably do want to see Nuncrackers, an uplifting, funny Christmas pageant that is the perfect infusion of holiday spirit. By the end, all the crises have been resolved, and the nuns (and the priest) have reconnected with the generosity of the season. With luck, the warm glow you leave the theater with will last till Christmas.