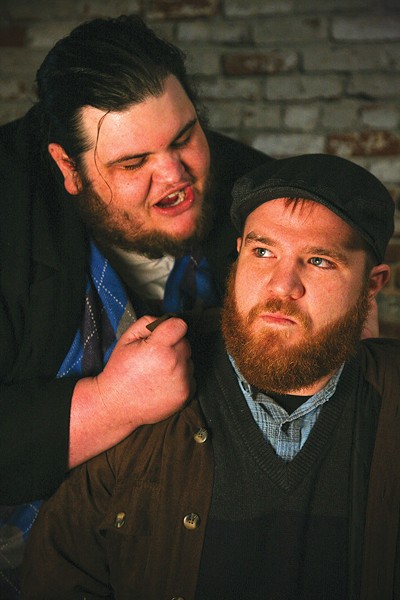 At one end of the murder-prone Irish town of Leenane, in County Galway, 30-ish Maureen (Jessica Short Headington) lives with her insufferable mother, Mag (Lennie Dean), trapped in a mutually destructive cycle of abuse.

Meanwhile, elsewhere in the town, brutish brothers Coleman and Valene (real-life brothers Nick and Jon Christenson) alternate between battling each other for control of their deteriorating cottage and needling the local priest, Father Welsh (Clint Campbell), whose faith is in shambles, due to the generally poor spiritual life of his parishioners.

In The Beauty Queen of Leenane and The Lonesome West, two interconnected works by Martin McDonagh (now running in repertory at the 6th Street Playhouse), the underlying bleakness of the material is countered by a complex sense of dark comedy.

In Beauty Queen, gracefully directed by Bronwen Shears, Maureen's sense of obligation has turned to bitterness. Mag openly baits her daughter with criticisms and petty demands, while secretly sabotaging Maureen's every chance at having her own life.

Maureen's big chance comes when snarky local youth Ray (Jay Maudlin) delivers news that his Uncle Patto (Chris Ginesi) is visiting from London, and when Patto shows up later, clearly smitten with Maureen, everyone recognizes that Maureen's future happiness hangs in the balance.

Lonesome West, entertainingly directed by Ginesi, who takes a second stab at the play (following his production last year in Sonoma by Narrow Way Stage Company), has similarities to its companion play: dark humor, a sense of impending violence and a tendency among the characters to argue about which snack foods are better than others. The argumentative streak extends to flirtatious Girleen (Nora Summers), who even argues with poor Father Welsh, who she clearly has a thing for.

Though the accents are sometimes a bit muddy, and a key scene in Beauty Queen is staged in such low light its hard to tell what's happening, there is much to engage in McDonagh's beautifully crafted studies of familial love and anger. Strongly acted by two tightly knit casts, the stories are not always pretty, but will be as hard to dismiss as a whack on the head with a heavy object.