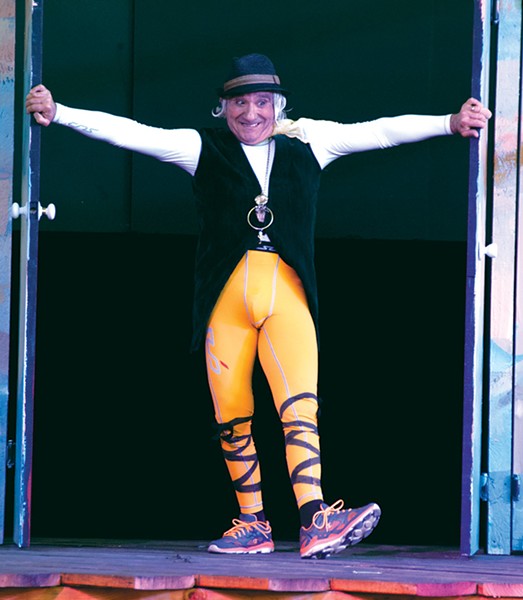 Twelfth Night is one of Shakespeare's most popular plays. It deserves to be.

The story—about a pair of twins, Sebastian and Viola (an excellent Carmen Mitchell), shipwrecked on the coast of a strange land where everyone seems to fall in love with the wrong person—is clever and accessible, the language is beautiful but not overly flowery, and the situations are universally funny. There are identical twins, obsessive lovers, mistaken identities and some truly colorful characters. It's great stuff, all served up with Shakespeare's patented sense of poetry and escalating crisis.

And there's that great speech about music being the food of love.

What's tricky about a play this well-known and well-loved is presenting it freshly. How do you bring something new to a show that has been so thoroughly mined and milked that virtually everything discoverable about the play has been discovered?

That's the task set before director David Lear and the Shakespeare in the Cannery crew, now halfway through a six-week run of the play in the old cannery ruins in Santa Rosa's Railroad Square. With a uniformly talented cast, and a strong vision, Lear has found a way to balance the play's extremes, making the comedy funnier by attending to the details of the drama.

Known for innovative and sometimes unconventional approaches, Lear does make a few changes, the most obvious being the character of the jester, Feste, who here has been split into two, played as twins or clones or BFFs by Haley Bartels and Brandon Wilson, both delightful. The other obvious splashes of invention are largely stylistic, from the tennis shoes worn by most of the cast to the black lipstick and corsets worn by several of the supporting players.

The cast perform as a superbly balanced ensemble, but special attention should go to April Krautner as Olivia (the grieving noblewoman who falls for Viola), moving from gloom to puppy love with immense charm; Clark Miller and Brian Abbott as, respectively, the drunken Toby Belch and Andrew Aguecheek (silly and kind of sad at the same time); and the magnificent Alan Kaplan as Malvolio the butler, the play's trickiest role, who, as the subject of one of literature's most famous practical jokes, must go from ridiculous to near tragic, without altering the tone of the shenanigans around him.

By finding the new in something so old, this is a Twelfth Night to celebrate and savor.