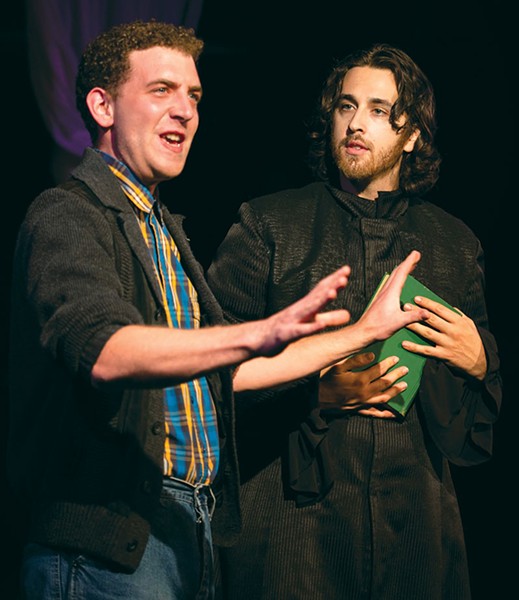 Cinnabar Theater's The Fantasticks, the 1960 musical that ran for a record 42 years Off-Broadway, is a modest production with a sweet score and engaging performances. Neighbors Mrs. Hucklebee (Krista Wigle) and Mr. Bellomy (Michael Van Why) each have a child they wish to see fall in love with the other. They figure the best way to achieve that is to start a pseudo-feud between the families and make it clear to their kids they don't want them to see each other.

When Luisa (Carolyn Bacon) and Matt (Lucas Brandt) do fall in love, how do they end the "feud" so all may live happily ever after? Well, they hire a mysterious stranger who goes by the name "El Gallo" (Sergey Khalikulov) and some players (James Pelican, Brandon Wilson) to stage a phony abduction of Luisa to allow Matt to rescue her so all may be forgiven, of course! Act one ends on a happy note, as all seems rosy for the couple. Act two makes it clear the bloom has fallen off the rose.

The Tom Jones/Harvey Schmidt musical traces its roots back to Shakespeare and Greek and Roman mythology, and yet if feels more dated than that. Director Elly Lichenstein utilizes several authorized revisions to make some of the show's more problematic elements palatable to today's audience, and it mostly works. The music is nostalgic ("Try to Remember" opens the show), the staging is colorful, and the cast is excellent, with Bacon and Khalikulov in fine voice and Pelican and Wilson providing welcome comedy relief.

Curtain Call Theatre in Monte Rio is presenting Bullshot Crummond, a 45-year-old parody of a pretty much forgotten 100-year-old British literary character. It's the type of show where you're encouraged to boo the villain and cheer the hero as he rescues a damsel in distress.

An ambitious undertaking for the small company in terms of staging, the production's technical elements are somewhat lacking, but the steampunk-costumed cast is game and director Avi Lind puts them through their paces. There are some nice bits of physical comedy and inventive sight gags that at the very least will have you cracking a smile and shaking your head. It's silly and it's stupid, but that's what it's supposed to be. ★★½