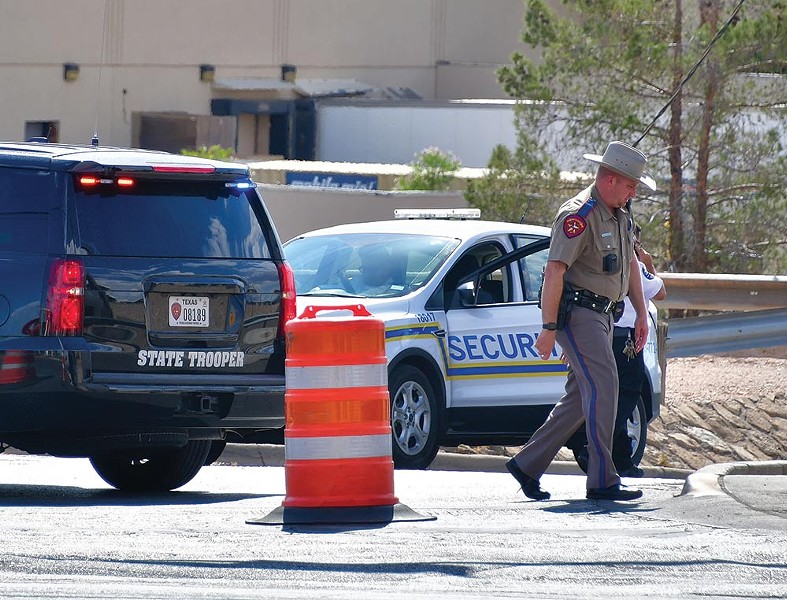 Throughout the day the horrible news trickled in.

"We had a retreat over the weekend at Westminster Woods," recalls Guadalupe Navarro, executive director of Windsor's Latino Services Providers, "and the students had just completed their mental health first aid program."

That's when the news started to come in about the El Paso mass shooting that targeted Mexicans.

Dozens of Latino youth were working on a training and certification program at the Occidental facility that would give them the skills to deal with trauma in the region's immigrant community. Most of the students didn't have the local Wifi password and couldn't get online. "Luckily, we didn't provide the wifi passwords," she says. But one student did get the news alert, says Navarro, and had an emotional breakdown.

Soon everyone at the retreat had heard the news. Now Navarro was faced with dealing with a traumatized student body that had just gotten training in working with immigrants who've been faced with deportations and a rising tide of rhetorical and actual violence against immigrants.

In the aftermath of the weekend shootings in El Paso and Dayton, and on the heels of the mass shooting at the Gilroy Garlic Festival two weeks ago, local fears about Immigration and Customs Enforcement (ICE) have been enhanced by the fact that brown-skinned persons—or anyone, for that matter—is at risk from the growing scourge of white nationalism stoked by President Trump.

"We're already on a mission to reduce stigma around mental health," says Navarro—but now her 39 paid interns face a trauma all their own.

They range in age from 16 to 26 and are mostly Spanish speaking youth who hail from all parts of the county, from Healdsburg to Petaluma (the program she runs is open to all students, regardless of their immigration status, she says). They were supposed to go out into the community to support their fellow immigrants and that's still the plan. But first the organization had to tune in to the students' mental health.

"Now we have to protect and support our students. The students had completed their training and their emotions were already mixed," she says. "Adding a tragic event after the training—that's just too much."

Trauma can manifest in multiple ways—numbness, rage, terror, depression. And, at a certain point, it does feel like all that's left is upper-case outrage to go along with a growing sense of outrage and fear at the apparent convergence of executive-level hate speech and right-wing violence in this country.

Over the weekend, and in response to deadly shootings in Texas and Ohio that came on the heels of last week's Gilroy Garlic Festival shooting, North Bay U.S. Rep. Jared Huffman could only point out, in all upper-case on his Facebook page, that "ASSAULT RIFLES AND HIGH CAPACITY MAGAZINES THAT CAN INFLICT INSTANT CARNAGE LIKE THIS MUST BE BANNED."

Huffman was referring to the Ohio gunman who opened fire and killed nine people and wounded 27 others in Dayton, in a span of 30 seconds. His motives remain unclear. The El Paso killer's motives were spelled out in a manifesto that took Trump's words about an "invasion" at the border to heart.

State officials had already been decrying Republican fealty to the National Rifle Association at the time of the weekend shootings that have shaken the country. Speaking to reporters at Santa Clara Valley Medical Center following the Gilroy massacre two weekends ago, Gov. Gavin Newsom highlighted how California's strict gun laws—semi-automatic weapons and high-capacity rounds are banned in the state—can't stop a terrorist from purchasing one of the weapons where they're legal.

The Gilroy shooter purchased his deadly weapon, an AK-47-style assault weapon, in a Nevada gun store before killing three people at the popular Gilroy festival. He committed suicide at the scene; reports that police shot and killed him within moments of the shooting were erroneous. In response, the Sonoma County Fair officials announced security upgrades would be in place.

Newsom's comments following the Gilroy shooting focused on the U.S. Senate's unwillingness to take up meaningful gun control legislation when it comes to military-style assault weapons. Much of that reluctance has historically been tied to the NRA's power and influence in Washington and its lawmakers.

Over the weekend just passed, Newsom could only amplify the growing sense of outrage after the El Paso shooting, which targeted Latino shoppers at a Walmart at the Texas border town: He said it was an epidemic. He said it was a crisis. And, he repeated what others have repeated in other states when mass shootings come to town—he said that that the U.S. Senate had to act. Instead: thoughts and prayers. The all-too-familiar ritual.

Newsom's post garnered nearly 7,000 comments, many of which were in support of gun control and many of which were not. The comments provide a picture of the morass that this country finds itself in when it comes to gun violence and what, if anything, can be done about it, when citizens are so widely split on root causes and solutions.

Texas is an open-carry state and Walmart is not a gun-free zone. Numerous reports about the incident noted that there were several armed people in the Walmart at the time of the shooting. At least one of those persons told reporters that he feared for his own safety at the hands of law enforcement if he took action against the shooter.

Other California posters noted on Newsom's FB feed that the problem isn't white nationalist violence unleashed by Trump and his minions, it's "a generation raised on Hollywood and videogame violence, poor parenting and schools, social media and yes, fake news."

Social media posturing is one thing. Protecting the local community is entirely another.

Maria de Los Angeles is a Santa Rosa–raised artist brought to this country by her parents when she was a youth. The young Mexican-American woman has a show of her paintings coming up at the Museum of Sonoma County and has taken note of the unfolding horror as she's preparing for her opening on Aug. 24. Through her art, she's focused on immigrants' contributions to the culture and she also highlights their contributions to the California economy.

The Public Policy Institute of California recently reported that the state will be short by some 1.6 million workers by 2025, a statistic that does not take into consideration the specter of mass deportations under Trump. "Immigrants contribute so much to our countries' economy," says de Los Angeles. "We need to protect all immigrants and their human rights. We are suffering the consequences of the continued dehumanization of Latinx, and specifically undocumented immigrants in the U.S.A."

The recent shootings, she says, are a shared concern for all. "Acts of terrorism are a public safety concern for all people living in the U.S.A. and our government needs to address it at all levels."

She's calling on the news media to condemn hate speech, and on elected leaders to establish a fair immigration system, "and immigration reform with a path to citizenship for people, regardless of their educational level, who contribute to the U.S. economy." And, she's calling for stronger gun regulations in the wake of the devastating mass killings that have taken place over the past few weeks.

The good news, sort of, is that the Bay Area has adopted a more-or-less welcoming posture toward immigrants—while also enjoying a dramatic drop in gun violence. Regional Second Amendment hard-liners who decry liberal attempts at gun control might take note of an investigation that appeared in the Guardian in June of this year which found that the Bay Area had experienced a surprising drop in deadly gun violence between 2007 and 2017.

That report, among other highlights, showed that it's possible to talk about high rates of gun violence in minority communities without calling those communities rat- and crime-infested shitholes, which is the president's preferred rhetoric when it comes to places like Baltimore and Chicago. Last week, Trump teed off on the homeless crisis in San Francisco by way of extending his rhetoric to a region that's largely been in open defiance of his presidency.

It's too bad for Trump that the Bay Area, reported the Guardian, "is defying expectations on gun violence amid growing inequality and economic pressures," across the 12 counties that comprise the region.

And it looks like those "big city problems" are not coming home to roost in the North Bay. The Guardian found that even as Oakland and San Francisco are being transformed by gentrification (and are seeing big drops in gun violence along the way) that "outlying suburbs and towns where many residents forced out by gentrification have moved—did not see a corresponding increase in violence."