On the Right Trail 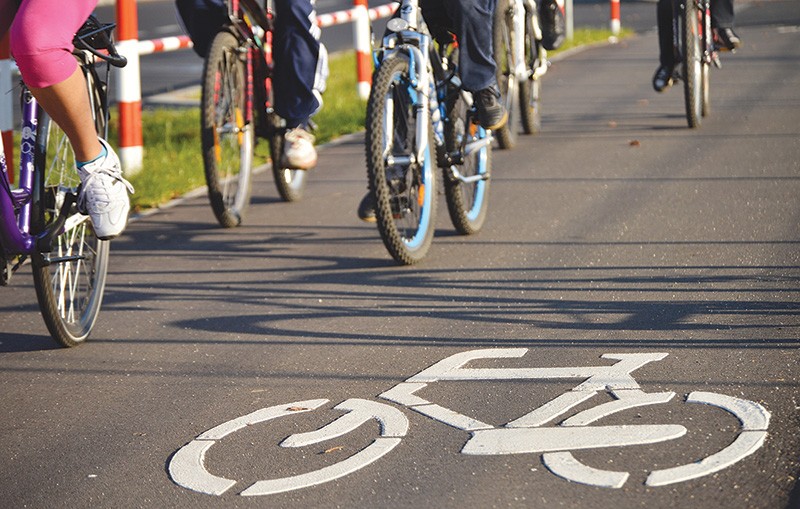 The Sonoma County Bicycle Coalition (SCBC) has put the pedal to the metal on a pile of bike-friendly projects around the county.

Check out the Santa Rosa–based nonprofit's website (bikesonoma.org), and it's obvious that trail advocacy is high on the priority list. The organization has seen through multiple projects to ease the way for cyclists. The coalition successfully pushed to prioritize bike safety at Highway 116 and Occidental Road. Now there's a new bike path being built there.

How do they do it?

"We're successful because we look for a way that landowners get something and the people of Sonoma County get something out of it rather than pounding your fist on the table and screaming about bicycle rights," says SCBC executive director Gary Helfrich. "That doesn't work."

There are now two big trail projects afoot kickstarted with grant money for feasibility studies. One study is well along the way to completion; the other's just getting going.

Local officials expressed audible delight when a $190,000 feasibility study was unveiled in 2013 to suss out the long-held dream of a Santa Rosa–to-Sonoma trail. The study is funded through a grant the California Department of Transportation awarded to Sonoma County Regional Parks. Questa Engineering is the go-to consultant doing the study.

Proponents see Valley of the Moon pedal power as a great way to foment wine tourism, since the proposed trail atop an aqueduct backs up to several wineries along the way. As such, the coalition has seen "excellent results with landowners down in the valley," says Helfrich. "This is seen as a tourism amenity, as economic development."

Helfrich identified a couple tricky stops along the way to a green-lit construction of the 13-mile path, which would be undertaken by the county. The main thrust of the project would utilize a Sonoma County Water Agency easement parallel to Highway 12—and the imperative is to do whatever it takes to keep people off of that decidedly bike-nasty road. That's easier said than done.

Trail advocates are now deep in the weeds of one-on-one negotiations with homeowners whose property intersects with the proposed trail, and with sorting out access to utility easements along the way.

"An awful lot of work goes on that nobody gets to see because it involves negotiations with property owners," Helfrich says.

One issue in need of resolution is how to structure the trail at the point it passes through Kenwood, where Highway 12 essentially becomes Main Street, and where "there's a zillion driveways and lots of traffic," says Helfrich.

The anticipated solution is to send cyclists through lesser-used neighborhood roads. "[Sonoma] Regional Parks recognized that the trail has to go through the backroads of the town," says Helfrich.

Kenwood's local merchants support the trail, he adds. "They like the idea that it's kind of a halfway point where you can wander through and buy lunch."

The ultimate price tag of the trail is still to be determined, says project manager Ken Tam of Regional Parks. That will be a part of the final report from Questa expected later this year.

The bike coalition helped score funds for another feasibility study in April, also administered by Caltrans. The organization was one of several groups and municipalities that kicked in matching funds to a $209,000 Caltrans grant, bringing it to $248,000.

The goal: a safe ride from Sebastopol to Petaluma. There's only one problem: Where's the trail going to be?

The study area includes a one-mile stretch from Sebastopol city limits to Regional Parks' Joe Rodota Trail and one mile into Petaluma city limits to connect with its existing bicycle network.

But whereas the Sonoma-to–Santa Rosa project features an identifiable trail, the Sebastopol-Petaluma route is unclear, at best.

"Look at the study area and it's a huge blob instead of just a line," says Helfrich. "There's no obvious route."

There was a railroad that rolled through here, he says, but it comes with a chain of title that needs to be unraveled. And part of that railroad line is already buried under Highway 116. Sonoma Regional Parks notes that much of the railroad right-of-way is privately owned and developed for other purposes.

"There's a lot of misinformation out there," says Tam. "People automatically assume where the trail alignment is going to be. We have a starting point, Sebastopol. And we have an end point, Petaluma. But how we get from here to there, that's what the study is going to do for us."

The feasibility study is in its infancy, Tam says, and no consultant has been selected yet.

"We will get the grant but we won't get it until the state budget is approved," Tam says. Once that happens, the job can go out for bid.

The Petaluma end of the project should see an uncomplicated negotiation with a small group of landowners, Helfrich notes. But at the Sebastopol end, "there are hundreds of people with property, and it just takes one" to put the brakes on the plan.

Some of the feasibility funds will be used to conduct what Helfrich says will be the "biggest title search ever."

It could get complicated. "A lot of people probably assume that they own that little strip of land behind their fence," says Helfrich. Sometimes they do, and sometimes they don't."

"I love the idea," says Sebastopol resident and avid recreational cyclist Peg Roth. "Although I understand that there may be hurdles, I'm all for applying time, money and energy to promoting cycling by expanding our trail system. I feel we'd really benefit from a cultural shift which prioritizes cycling beyond recreation."

Roth relates some of the cycling wisdom she's learned in trips to Holland. Sonoma County could take a lesson from the super-bike-friendly Dutch.

"I am amazed at how cycling is a part of their daily life," says Roth. "It's seamless—grocery shopping, picking up children, going to a wedding are done on bicycles. My friends cycle to work, to the movies, to the bar, and they have their own lanes and traffic signals for this.

"It's fairly simple," adds Roth. "We'll never move in the right direction here if we don't dedicate time and money to promoting safe access for bicycles."

Peg Roth's brother, Eric Roth, also lives in Sebastopol and falls on the serious end of the bike-culture spectrum. He's a member of the Santa Rosa Cycling Club and says he's ridden 7,000–8,000 miles a year each of the past two years, including five double-centuries in 2014.

Eric notes that the Sonoma-Petaluma effort is "not very important to serious recreational cyclists," given the poor quality of Sonoma County roads and the chronic lack of sufficient funds to fix them.

Bike-friendly trails open to all are nice, but road maintenance "is much more important," Eric says. "We like to bike where there's less traffic, but these roads are in such poor condition on average that it's pathetic."

The Sonoma County Bicycle Coalition has also supported projects that push for improved roadways in Sonoma County. But county voters took a pass on Measure A earlier this year, which would have put a tax on residents to fix Sonoma's crumbling road infrastructure.

Improved roadways are not, however, in Tam's bailiwick. He's a parks guy, and these trails are for everyone: pedestrians, cyclists, whomever.

These projects "are geared more for people who don't want to use the public roadways," Tam says, while stressing that he's not discouraging road cyclists from doing their thing.

"Some families don't feel comfortable riding along the shoulder. This is an alternative to using the road, and our focus is on getting them off the road."