Is there hope for California's salmon? 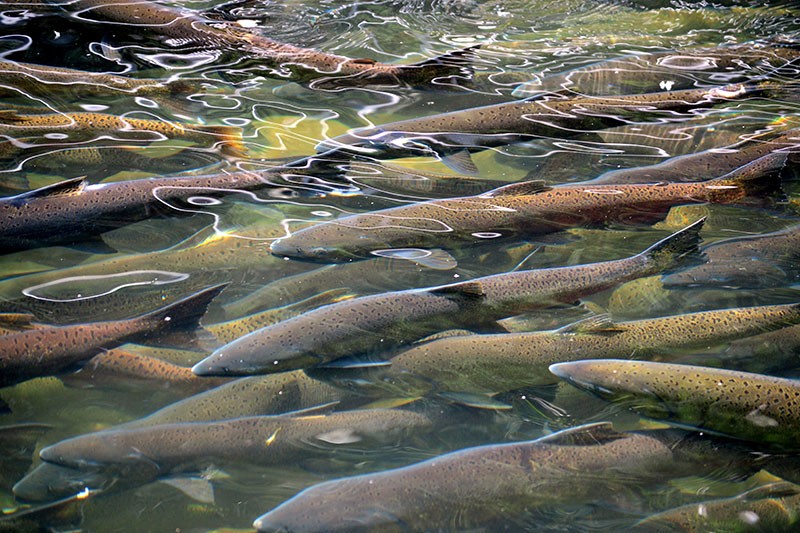 For more than 14,000 years, humans have had a close relationship with wild salmon.

Along the Pacific Coast, natives harvested thousands of adult salmon each fall from their spawning grounds in local rivers and streams, a catch that fed their families throughout the year.

While many cultures in the Pacific Northwest and Alaska are still deeply wedded to the salmon resource, California's grasp has grown increasingly slippery, with only a small percentage of its historical natural breeding population remaining.

Salmon's legacy for Californians goes far beyond its estimated $1.4 billion fishery or its classification as one of the most nutritious foods in the world: the fish also provide a vital transfer of nutrients and energy from the ocean back to the freshwater ecosystems where they were born.

"People have done studies to show that you can identify ocean-derived nutrients from salmon in many dozens of different species, like kingfishers or water ouzels, fish-eating ducks, foxes, raccoons, coyotes—all the way up to the big predators that used to live here but are gone, like grizzly bears," says Nate Mantua, a research scientist for the National Oceanic and Atmospheric Administration's (NOAA) Southwest Fisheries Science Center in Santa Cruz.

Accumulating 95 percent of their biomass at sea, adult Pacific salmon die after they spawn, and their nutrient-rich carcasses, gametes (mature eggs and sperm) and metabolical waste return to the land. "It's fascinating that, over the eons, a lot of fertilizer was provided by these dead salmon, so a lot of the wine grapes and a lot of the agriculture inland by the rivers was fertilized by salmon for a long time," says Randy Repass of the Golden Gate Salmon Association (GGSA), a coalition of salmon advocates based in Petaluma.

Salmon's yearly return props up an entire food web, replenishing bacteria and algae, bugs and small fish, and fueling plant growth with deposits of nitrogen and phosphorus. The Chinook (aka king), the largest salmon species (adults often exceed 40 pounds and are capable of growing to 120 pounds), is the pride and joy of California's salmon fishery. Not so long ago, the Central Valley watershed was one of the biggest producers of naturally breeding Chinook salmon in the world, second only to the Columbia River, with the Klamath River another big California contributor. Driven by the Sacramento and San Joaquin river systems, the Central Valley nursed a ballpark average of a few million salmon per year, emerging each spring out of the Sacramento-San Joaquin Delta, says Mantua.

"Today, natural production—maybe in a good year—is in the hundred thousand or hundreds of thousands," Mantua says. "So, yeah, it's a few percent of the historical population."

In addition to cold ocean water and an ample food supply at sea, salmon require cold river water that drains all the way to the sea, and, during their early life, a delta habitat. Salmon eggs do not survive in water warmer than 56 degrees, which is why adult fish ready to spawn instinctively head toward the cold, upper headwaters and tributaries coming out of the snow-packed mountains.

Development in the 1940s through '60s, and especially the constructions of dams like the Shasta Dam, built in 1943 on the Sacramento River, played a key role in the near annihilation of the long-standing fish stock. "When they built the big dams in California, they basically blocked off access to 80 or 90 percent of the habitat salmon historically used to reproduce in California," says John McManus, executive director of the GGSA.

California's four salmon runs—fall, late-fall, winter and spring—are named for the time of year the fish return from the open ocean as adults, after about two to five years spent feasting on smaller fish and krill at sea, and back under the Golden Gate Bridge to the Sacramento-San Joaquin Delta. As of 1989, the winter run had joined the ranks of 130 other endangered and threatened marine species when it was listed as an endangered species under the Federal Endangered Species Act. Ten years later, the spring run was listed as threatened.

Following a period of abundance in the late '80s, and then again in the late '90s and early 2000s, California's salmon season was closed in 2008 and 2009, resulting from a population crash that NOAA scientists found was due to a lack of upwelling and the subsequent low production of krill, one of salmon's dietary staples.

"The population has undergone a modest rebound since then, but it still has not reached the abundance that we observed in the late '90s and early 2000s," says Michael O'Farrell, a research fish biologist at the NOAA.

While there has been an increase in small sardines, a potential good sign for salmon, Greg Ambiel, who has been fishing salmon locally for 30 years, is not hedging any bets for this coming season.

Indeed, over the last few years, a fairly drastic shift has occurred, with high-profit almond crops replacing raisin grapes and other less profitable crops in the Central Valley. The problem for salmon is that it takes a gallon of water to produce one almond—which is three times more water than it takes to produce a grape—according to a study published in 2011 at the University of Twente in the Netherlands. Water demands for agriculture are a known contributor to an estimated 95 percent loss of salmon's critical rearing ground in the Sacramento-San Joaquin Delta.

Last month, O'Farrell began the process of calculating 2016 abundance forecasts for both the Sacramento and Klamath rivers and tributaries, based on data that includes the return of fish the previous fall. Each March, he reports the number to the Pacific Fishery Management Council, who then sets the season in April.

"Where we're at right now, we've come out of the very low abundance periods of 2008 and 2009, but we don't know exactly what the returns are for this past year," O'Farrell says. "There are some issues that we are monitoring with regard to the effects of drought and ocean conditions. It's hard to say which way the population's going to go at this point, but we'll have more information on that in a couple of months."

The Central Valley Improvement Act, passed in 1992, ambitiously hoped to double the number of salmon and steelhead trout in the Sacramento River basin over the past 22 years, but it has fallen short. While their goal was to see 86,000 spring-run Chinook salmon spawning in the Central Valley by 2012, the number was only 30,522. Federal officials cited obstacles such as drought, competing demands for water and lack of funding.

But Steve Lindley, leader of the Fisheries Ecology Division at the NOAA, points to wetland-restoration success stories in the Central Valley, in places like Clear Creek and Butte Creek.

"These shallow areas that are nurseries for salmon—those populations have done very well, even during the poor ocean and drought periods," he says, "so it's not a lost cause. But we do really need to address some of these habitat issues, and find a way to operate salmon hatcheries in a way that supports our fisheries without imperiling their long-term liability. We're really keen on working with GGSA and the fishing community and the broader fish and water communities to try to find those kind of solutions."