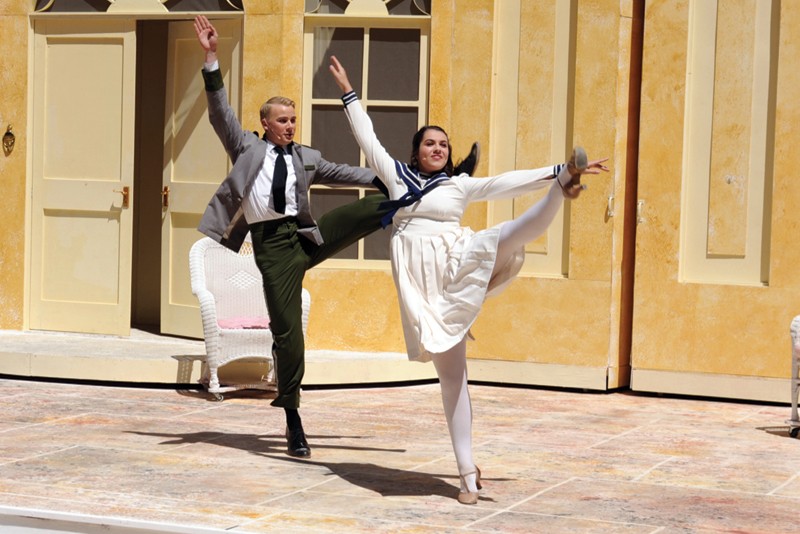 Few American stage musicals are as well known and beloved as Rodgers and Hammerstein's Sound of Music. So it's funny that so few of its fans have ever actually seen the show onstage.

Compared to the 1964 film starring Julie Andrews—one of the best film adaptations ever made of any play—few stage versions stand a chance at delivering a matching emotional impact. But every once in a while, a theatrical production manages to bring something to The Sound of Music that no other production, including the film, quite manages to achieve.

In the case of the Mountain Play, what director Jay Manley brings to The Sound of Music is sheer, dazzling, unlimited size. Expanding to fill the massive stage area of the 3,000-seat amphitheater, set designer Ken Rowland has erected a gorgeous, sprawling Nonnberg Abbey for the stirring chorus of opening Hallellujahs, sung by a crack team of 24 Benedictine nuns and monks.

When we first see Maria, played well by Heather Buck (seen at Spreckels in last year's Camelot), she is stationed at the center of the amphitheater, belting the soaring title song from a large boulder beside a wind-twisted tree. A few moments later, when she's assigned to the household of Captain von Trapp (Ryan Drummond) and his seven children, the Abbey splits into two, each piece pivoting around to create the family's mountainside mansion. And when the Nazis take over Austria, the sight of massive swastikas fluttering over the stage is impressively jarring and effective.

Even the musical score has expanded, and now features all the songs from the original stage production, including some cut from the film, along with two songs written specifically for the movie.

With this Sound of Music, Manley and his cast and crew certainly deliver the spectacle while managing to stay true to the intimacy of the story, the simple tale of people in love, struggling to do the right thing in difficult times.