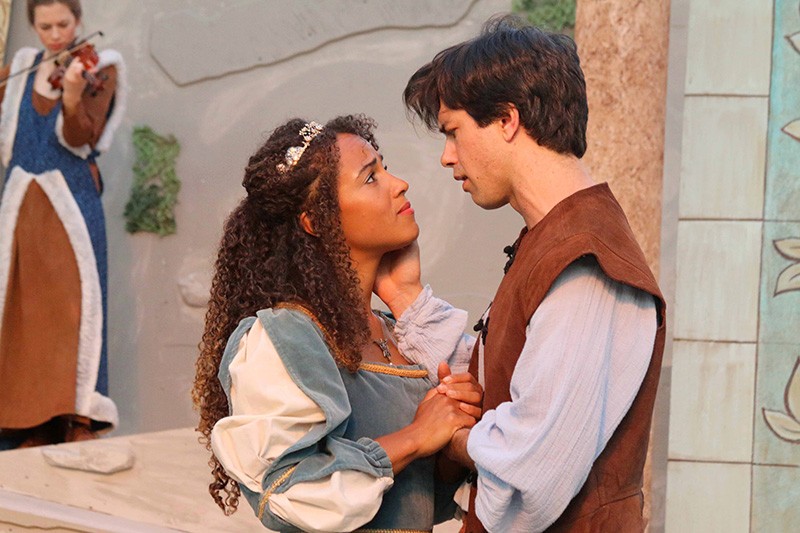 There's an unwritten law in theater that says if you're going to mess with the text of a Shakespeare play, you'll get less blowback if you pick a play few people know.

Cymbeline, one of the playwright's last works, is rarely performed, despite the fact that it's one of his most complexly plotted, surprise-packed and satisfying plays, all of which made it very popular, once upon a time.

Modern critics tend to turn their noses up at it, as they do anything Shakespeare wrote for the sheer hell of it—which is exactly what Cymbeline feels like. As the Latin critique goes, Prolixior est unum rabidus fabula. Roughly translated: "This is one crazy play!"

Cymbeline, running outdoors through July at Marin Shakespeare Company, carries so many plot ideas reminiscent of Shakespeare's other plays that it often seems like a cross between self-parody and a career retrospective. There's a woman disguised as a boy, an aging ruler losing his kingdom and his sanity, a soldier convincing a married man his wife is unfaithful and a magic potion that makes the living appear dead.

Though the play is named for the recently remarried English king Cymbeline (Paul Abbott, in a performance as over-the-top as a circus tent), the true heroine is his daughter, Imogen, played with brilliant simplicity and sweetness by Stella Heath. Imogen has angered her father by refusing to marry the obnoxiously self-loving prince Cloten (a hilarious Thomas Gorrebeeck), marrying instead the lowly Roman orphan Leonatus Posthumus (also Gorrebeeck, apparently a quick-change artist).

Imogen becomes the target of her duplicitous stepmother, the queen (Lee Fitzpatrick) and also the subject of an egregious test of fidelity on the part of Posthumus. She ends up on the run, with Cloten in pursuit.

A pair of kidnapped princes raised as mountain men figure into the storyline, which packs enough twists, turns, mistaken identities and hairs-breadth reversals for three Shakespeare plays. Director Robert Currier makes the dangerous choice of rewriting certain bits of exposition, either introducing the info in original songs (yep, it's kind of a musical) or adding enough comical commentary to make the sometimes-dense prose crystal clear.

While I'd have preferred Currier to have solved these problems the way most directors do—by directing the play so that it makes sense—in this case, it kind of works. And, hey, since very few audience members will have seen Cymbeline before, it's likely no one will know the difference.