One for the Road

Trail House is a biker bar for fat-tire fanatics 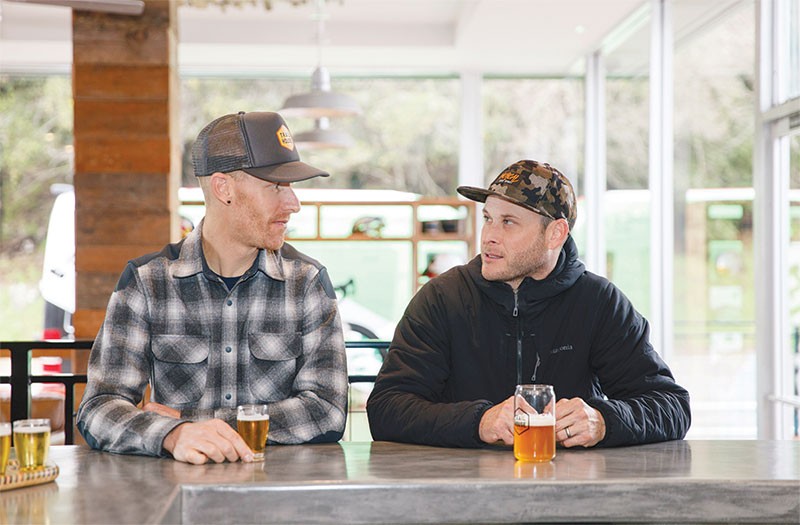 Glenn Fant and Shane Bresnyan have been riding the 40-odd miles of trails at Annadel State Park for more than two decades. Fant owns Santa Rosa's NorCal Bike Sport and the Bike Peddler; Bresnyan was the former manager at the Bike Peddler.

After a day of hammering the trails, the friends head out for beers but used to lament the lack of any place close to Annadel that fit the bill. They solved that problem by opening Trail House just a short ride down from their beloved park.

The six-week-old venture serves as the ultimate post-ride hangout with a dozen beers on tap, a basic but brew-centric food menu, a comfy lounge, three monitors with biking and other sporting events and a wall map of Annadel for reliving your ride or figuring where you took that wrong turn. They also serve Sight Glass coffee and pastries for pre-ride fuel.

But Trail House is more than a cafe. There's a bike mechanic on duty, a rental fleet of demo bikes and a full range of bike gear, like helmets, tubes, shoes and apparel—basically everything but bikes for sale. They leave that to Fant's other shops. Trail House will also offer 24-hour repairs with the help of an after-hours mechanic, a very quick turnaround for a bike shop.

Trail House is really a clubhouse for Sonoma County's thriving mountain-biking community. A dozen or so vintage bikes hang from the ceiling, early models from Scot Nicol (founder of Sonoma County-born Ibis Cycles) and other frame builders, as well as Fant's first mountain bike and a cruiser that that once rode the trails at Annadel back in the sports' infancy in the 1970s.

Bresnyan plans to curate the bikes with brief narratives about the bikes' place in Santa Rosa cycling history. There are also plans to offer membership with benefits like bike storage, showers, mechanic service and personal beer steins.

At times Bresnyan isn't sure what to call Trail House. Bike shop cafe? Biker bar? He likes "a place of community."

"We're super-proud of Santa Rosa and our community," he says. "The mountain-bike scene is pretty amazing."

The cafe-within-a-bike-shop phenomena isn't new. Santa Rosa's Trek Bicycle Store opened a short-lived coffee bar inside its shop in 2015. Bresnyan points to Fairfax's Gestalt Haus, a mountain biker–friendly pub at the foot of Mt. Tamalpais, as a source for inspiration. He says the idea is part of an effort to stay competitive in an era when online bikes sales are putting many shops out of business.

"The bike shops that don't change are going to go away, but you can't get this online," he says, looking around Trail House.

Bresnyan is quick to add Trail House is not a restaurant. Installing a ventilation system and commercial kitchen would have been prohibitively expensive. Instead, they outsource burritos from nearby Lepe's Taqueria and pizza slices from Mary's Pizza Shack. They also make an upgraded version of an Egg McMuffin called a Western Spirit sandwich that's an ode to one served by a beloved Utah mountain-biking outfitter.

Bresnyan hopes Trail House will become as much of a draw as the nearby state park. "Annadel is becoming a destination," he says. "It's a point of significance. That's what we want to be."