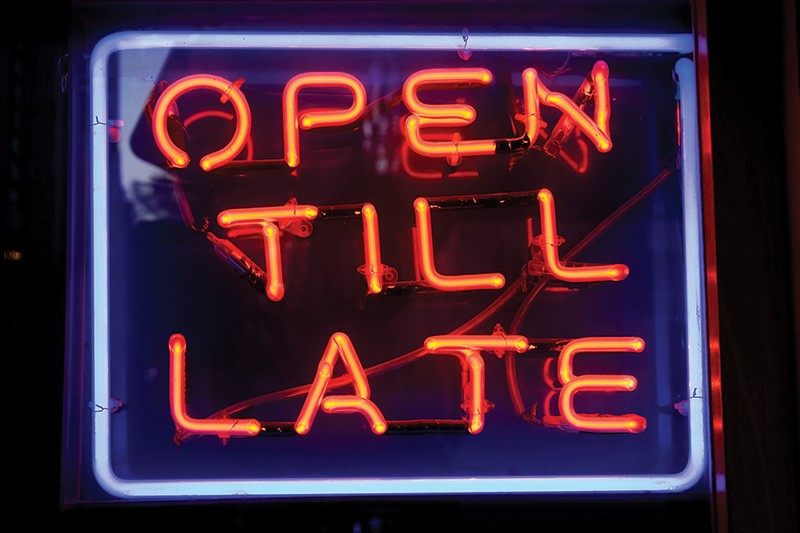 Everyone knows that Europeans like to dine late—and so do we, when we travel. Who doesn't have a story about a late, boozy dinner in Barcelona or a great meal eaten around midnight in Mexico? Carbs and grease after a night out, bought from a questionable vendor and devoured on the spot offer another kind of fine dining.

Dining late might be bad for you figure (scientists are still battling this one out), but it's easily one of the more satisfying guilty pleasures. More often than not, one may end up stranded in Santa Rosa or Sonoma with nothing but Applebee's or Denny's to the rescue. But there are better options—if you know where to look.

A number of local restaurants and non-chain fast food spots cater to after-hour dining and stay open past 11pm. In the area's "big city" of Santa Rosa, "NY Pie or DUI" is a slogan many can recite. The small downtown hangout is no-frills basic, with neon lights shining like a beacon of hope on the otherwise dark corner. NY Pie (65 Brookwood Ave., 707.526.9743) welcomes hungry groups as late as 3am, and the pies, although not sensational, do not disappoint, with a hefty selection of toppings and fair sizes.

Those who consider tacos to be the better late-night fix swear by the Delicias Elenita taco truck on Sebastopol Road (707.526.0881). Conveniently located across the street from the Whiskey Tip, the tiny but mighty truck is open until 1am nightly, feeding starving locals succulent carne asada tacos, elote (butter- and lime-juice-slathered corn on the cob) and burritos big enough to nip a potential hangover in the bud. Cash-only and always busy, Delicias Elenita is a late-night classic worthy of an alley by a fancy Berlin nightclub.

On the classier, calmer side of things, a couple of Napa and Sonoma restaurants are kind enough to cater to late eaters with the respect and style they deserve. In quaint Graton, Underwood Bistro (9113 Graton Road, 707.823.7023) is the real deal—just the right amount of chaotic and bohemian, always bustling and fun. Food is served until 11pm on Fridays and Saturdays, but the bar goes on until 2am, and if you come on the dot and beg for some food, the friendly staff won't refuse. Items on the varied menu include anchovy crostini, glazed baby back ribs and French onion soup—just the ticket if you had one too many cocktails at the bar.

In Petaluma, the local favorite Speakeasy (139 Petaluma Blvd. N., 707.776.4631) is another place that does late grub exceptionally well. Hidden in an alley off the main drag, Speakeasy serves dinner until 2am seven days a week, and not just any dinner. From the lobster mac and cheese to the sweet and spicy pork belly, Speakeasy's food is almost too good to be true at such late hours.

Even more upscale, the Morimoto Napa (610 Main St., 707.252.1600) lounge is open daily until midnight and all the way to 1am on Fridays and Saturdays, with plenty of appetizers, sandwiches and sushi temptations to choose from, such as Korean corn dogs and kimchee quesadillas— food that manages to be exotic while retaining an indulgent late-night vibe. Late-night food should be just a little bit over the top, and even elite cuisine can't mess with that.

Sometimes, though, all you want in the wee hours is a juicy Cubano sandwich and sweet, sticky plantains. San Rafael's Puerto Rican empire Sol Food (811 Fourth St., 415.451.4765) gives its devotees just that. Open until midnight during the week and 2am on the weekend, Sol Food is popular for a reason: festive and easygoing, it's an establishment bigger cities would want to themselves. Sadly, the closer you get to the Golden Gate Bridge, the hungrier and sadder you'll be.

Sausalito's Osteria Divino (37 Caledonia St., 415.331.9355) serves delicious spaghetti and antipasti until midnight on Fridays and Saturdays, and the same time slot will allow you to sip a margarita and munch on ceviche and carnitas at San Anselmo's Marinitas (218 Sir Francis Drake Blvd., 415.454.8900). Additionally, Corte Madera's long-standing and decidedly old-school Marin Joe's (1585 Casa Buena Drive, 415.924.2081) serves a full menu, steaks and all, until 12:45am on weekends and until 11:45pm on weeknights.

Eating out long after the 9 o'clock news is a grown-up, sexy experience that shouldn't be limited to hungry post-clubbers. Just imagine your favorite local wine bar offering gourmet hamburgers past last call, or a busy fast food spot open late in your neighborhood, a place where a community can come together in its culinary cravings. Judging by the number of happy faces of all ages past 10:30pm at some of these spots, more establishments should embrace the wild side and seriously postpone their bed time.