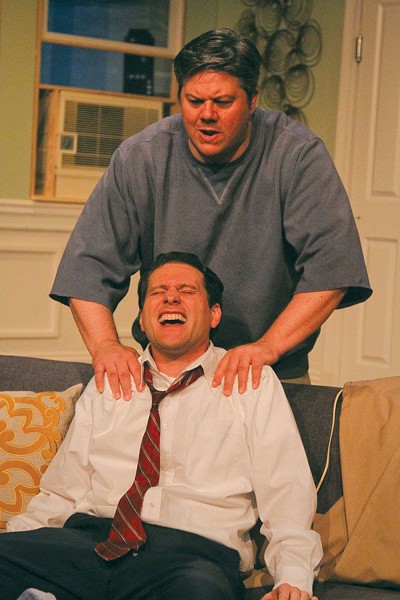 Last weekend, two Neil Simon plays opened in the North Bay, each a demonstration of the legendary playwright's mastery of rat-a-tat dialogue, skillful one-liners and flawed but relatable characters.

At San Rafael's Belrose Theater, Marin Onstage presents The Sunshine Boys, Simon's 1972 hit about a long-feuding former vaudeville duo lured into reuniting for a television special. Directed with obvious affection by Ron Nash, the production boasts an agreeably likeable cast, headlined by Grey Wolf as the irascible, grudge-carrying comedian Willie Clark and Michael Walraven as Al Lewis, clearly wary of his old partner but game to give the reunion a try.

In supporting roles are Richard Kerrigan as Willie's devoted nephew, Ben, and Christina Jaqua as an exhibitionist actress and a sassy registered nurse, with director Nash appearing as a television producer.

This kind of comedy, it should be stated, is not easy. To work, it requires metronome-perfect pacing. Wolf and Walraven do occasionally rise to that challenge, though their funniest moment is a nearly silent scene in which the two do nothing but move furniture around. Unfortunately, the poky pace of the production—possibly fueled by opening-night tentativeness and some conspicuous line bobbles—is far too slow and riddled with pauses for Simon's language to truly sing.

Oscar (Nathan Cummings, superb in every way) is a messy, undisciplined sportswriter who impulsively offers a room to his freshly separated, compulsively tidy best friend Felix (Aaron Wilton, perhaps a bit young for the part, but every bit as excellent). It does not take long for the fragile Felix—constantly chasing around with ashtrays and coasters—to start driving the laidback Oscar nuts.

The supporting cast—Oscar's Friday-night poker buddies and the neighborly twins, the Pigeon sisters (Samantha Dakin and Morgan Harrington)—are all extremely good, mining the text for laughs without losing sight of the characters' inherent humanity. But ultimately, it's the gracefully winning chemistry between Wilton and Cummings that makes this hilarious Odd Couple so fun and so emotionally satisfying.