An Asia-Centric Celebration of the Annual Sonoma County Restaurant Week 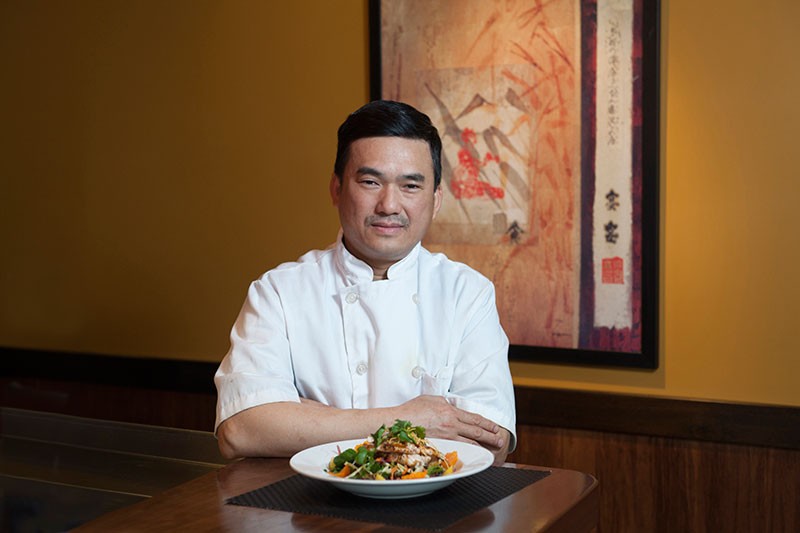 "Eight is a super-lucky number in Asian culture," says general manager Michelle Speakes as she explains the genesis of Eight Cuisine & Wine, the latest culinary outpost from restaurateur Steven Zhao. "In Shanghai, if your car has a license plate number with three consecutive 8s, you'll never get a ticket."

But it's not just the lucky signifier—the numeral also represents the regions represented on the Eight Cuisine menu. The Sebastopol pan-Asian newcomer—it's been in business about a year—offers classic Cantonese Chinese dishes (orange sesame chicken, pork spare-ribs) alongside Shanghai noodles and other French-classical dishes, prepared, as it were, with an Asian twist.

Two chefs help Eight Cuisine hold down the span-Asian offerings, says Speakes. Michael Ly (shown) is the wok-master trained in classical Cantonese cooking. The other, Ryan McDonald is "a young white boy who's worked with Scott Howard and others," she says.

McDonald is responsible for what Speakes describes as the "elevated higher-end side of the menu," whose tantalizing offerings include a grilled Australian lamb with red curry lentils, bacon, coconut milk, cauliflower and mint chutney. Duck confit is served with baby kale salad, carrots, honshimeji mushrooms, hearts of palm and mandarins. A filet mignon is served with Korean bulgogi sauce.

There's a burger, too, from Montana. That's not quite in Asia, but the burger does feature Sriracha-based ketchup and Korean kimchi, along with the old-fashioned American fries (or your choice of a salad).

The signature "Incredible Eight Cuisine Noodles" is a noteworthy and recommended option on the lunch menu (there's also brown and jasmine rice, and the noodles are also offered as a side dish). Incredible, indeed: monstrously thick and chewy chow mein noodles are prepared very simply with minced garlic, basil and butter. Call it Asian-Italian, or call it whatever you want—just order it.

A lunch plate called the Triple Green Jade features a basic, fresh-green-and-crunchy preparation of wok-fried snow peas, broccoli and green beans, cooked in a white wine sauce and featuring fried tofu rectangles peppered throughout the verdant victuals. It goes well with a side of noodles. A preliminary bowl of hot and sour soup reveals itself as a salty and jumbo portion of the classic Chinese offering, with a thick but never gummy broth. On a cold and rainy day in Northern California, it's the perfect soul warmer.

Speakes says everything at Eight Cuisine is made fresh in-house every day, with high-quality ingredients rounded up from a who's who of local purveyors of note, including Andy's Produce, Golden Gate Meat, Rosie's Organic Chicken and others.

The restaurant's décor and general outlook wholly befits the casual elegance of Sebastopol itself: tablecloths are cream-colored, and service is all smiles and ease. "We don't like stuffy service here," says Speakes. "And we tried white tablecloths, but they were way too bright."—Tom Gogola