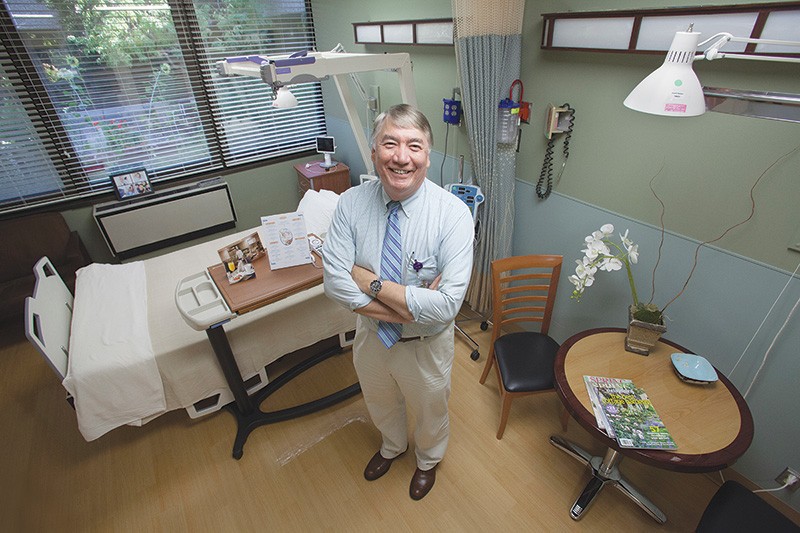 The hospital PA crackles to life, and medical personnel in scrubs hurry from all directions to the emergency room, where a patient has just had a stroke.

It's an exciting moment at the Sonoma West Medical Center (SWMC). But the only thing missing is an actual patient. This is a test, only a test—a training exercise, but the hospital's new executive expects it won't be long now before actual patients start coming through the door.

The hospital has undergone a $5 million upgrade along the way to an reopening that was by no means a certainty after it was forced to close in April 2014 over chronic fiscal shortfalls. Earlier this year, a flurry of expectation attended a proposed April reopening that wasn't in the cards, but this time they really mean it.

"The only surprise has been how long it has taken," says Hino.

On Monday, SWMC cleared its penultimate hurdle: a pharmacy inspection by the federal Drug Enforcement Agency. The DEA check-off came after two rounds of approvals from state agencies that ensured the facility had undergone earthquake-proofing and that other tune-ups had been made. The state was scheduled to do a final run-through on the pharmacy on Tuesday. Once the hospital got the green light, Hino would then make a call to the area emergency services network to tell them, "We are available for 911 transports."

There's no crinkly bunting to mark a grand opening along Petaluma Avenue, but there's still an "Open Our Hospital" sign out front, on the lawn of an adjacent medical mini mall.

The sign was itself a draw for Hino when local philanthropist Dan Smith, the major civic driver behind the hospital's rebirth, called him last year to see if he'd be interested in running the new proposed hospital.

"I was very impressed by the sea of red-and-white signs," Hino says. He signed on in November.

West County residents wanted an emergency room, and they got one. But the rest of the hospital's operations have to help pay for the ER, an expensive unit in any hospital, with lots of overhead and unrecouped costs at play.

"You need a hospital if you want to have an ER," Hino says.

The emphasis at SWMC will be on specialty surgery, telemedicine and marketing the hospital's top-of-the-line contributions to the regional medical scene, including its state-of-the-art mammography machine.

Hino and the marketing team plan a full-on advertising campaign to let people around the region know about the new hospital. They're not just bragging about the spacious rooms, the tablets in every room and the visitor chairs that can be reclined into beds for family members: they need the business. "We need to be a regional hospital," Hino says. "We can't be successful in just West County.'

The upcoming reopening was harshly criticized by some previous members of the Palm Drive Hospital District board of directors for being untenable and also for essentially transforming the hospital into a showroom for Smith's tablet-based telemedicine company, which itself was developed by pioneering surgeon Jim Gude. Smith bought the company from Gude, who returns to the hospital as medical director after leaving in 2011. Telemedicine is best described as an elaborate Skype-like system to monitor and evaluate patients from afar.

The controversy over Smith's role—critics accused him of a conflict of interest—is academic for now. But concerns about the hospital's viability are of course still open questions. The district board has a bankruptcy contingency plan in place, should the hospital find itself back where it was a year ago: in debt and without enough patients to keep it going.

Hino is convinced that the new hospital can and will be a viable operation.

As I toured the hospital, a group of visiting Nigerian physicians received training in the telemedicine technology. Hino says specialists will make use of the surgical facilities here, and the hospital anticipates buy-in from surrounding medical centers, too.

The new hospital has leveraged opportunities afforded under the Affordable Care Act to partner with area hospitals. "We can't do this alone," Hino says.

St. Joseph's Memorial Hospital in Santa Rosa has pledged to send patients to SWMC, out of necessity. "There's a bed shortage in Santa Rosa. They are transferring patients out of the county, to San Francisco and Sacramento," says Hino, a career hospital administrator. "We are a lot shorter distance."

He adds that there are benefits to working with a closed hospital, even if it was more expensive in the end. Among other upgrades, the floors were redone, the clinical lab was gutted and rebuilt, and the emergency room was upgraded. "It clearly cost more because the hospital had closed," says Hino. "The money we spent was mostly on the physical plant side. Lots of stuff had gone to pot." The physical plant upgrades alone cost about $2 million, he says.

The hospital employs 180 people, and roughly half worked here when it was still Palm Drive, says hospital marketing director Jane Rogan. Lots of employees are already showing up for work in anticipation of opening day, which has been put off. The kitchen is up and running, and Hino says patients can expect "the best-tasting hospital food in the state," but don’t expect a wine pairing. Maybe a glass of wheatgrass juice.

Some other details: The hospital has a 37-bed capacity but will open with 25. There's no hospital chapel, but Hino says he's working on a visiting chaplaincy service. The pharmacy won't dispense medical cannabis to patients since that's still a no-no under federal law, despite Sebastopol's pioneering dispensary operations. There's no special area for patients who come in under police escort, though Hino says he expects to see patients in handcuffs "from time to time." There's a gift shop in the offing, says Rogan, and lots of new loaner paintings on the walls, courtesy of Sebastopol artists.

Most important of all, says Hino, "We are open for everybody."

Not quite yet, but soon. Editor's note: This story has been edited and corrected to reflect that the hospital has not yet reopened.