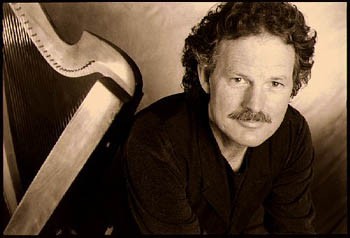 In a nation known for sad and lonely places, the Blasket Islands in County Kerry, Ireland, are perhaps the saddest and the loneliest. No one knows who named the string of small rugged isles off the coast of the Dingle Peninsula, but it has been suggested that the name is derived from the Norse word brasker, meaning "a dangerous place." Whatever the origin, after several hundred years of occupation, the last of the Blasket islanders had finally had enough of the hard-scrabble farming and scant fishing. In 1953, the entire community moved to America.

Their tale is fertile soil for local storyteller, playwright, and Celtic musician Patrick Ball. His one-man play The Fine Beauty of the Island, concluding this weekend at Spreckels Performing Arts Center, marks the 50th anniversary of the day the islanders packed whatever they could carry and left together for the States, a day the islanders refer to simply as the Vanishing.

In his play, Ball brings their tale to life through music, pub chatter, and historical details. His interest in the islands began 20 years ago when Ball encountered a haunting Irish tune said to have first been heard on the winds of the Blasket Islands and then passed down through generations of local musicians.

"A very unique community of poets, musicians, and storytellers lived there," says Ball, "and an entire way of life ceased. It was, quite truly, the end of an era in Ireland."

The Fine Beauty of the Island is just the latest highlight in a career that has earned Ball widespread acclaim as one of America's best storytellers.

Ball's own spiritual voyage to the Blasket Islands began nearly 30 years ago in Johnsborough, Tenn., site of the largest storytelling festival in the United States. There he sat on a crisp autumn night listening intently as local folklorists spun Appalachian tales at a benefit for a colleague injured in a car accident.

"It was the first time I ever heard anybody tell a story to a lot of people gathered together," says Ball, 53, a Sebastopol resident. "It didn't really seem much like a theatrical experience. It was more like a warm, intimate sort of exchange."

It was enough to convince Ball after his graduation from Dominican College in San Rafael (with a master's degree in Irish history) that being cooped up in a stuffy classroom was not for him. "It's the nicest job I've ever had," Ball says of the lucrative career he has created as an actor, playwright, storyteller, and Celtic harpist.

Ball uses the Celtic harp "to create an atmosphere where people are receptive to hearing the older stories," he explains. His own introduction to the instrument came a year after he began his career as a professional folklorist. He first heard the distinctively bright, chiming tone of the instrument in 1980, while visiting the Renaissance Pleasure Faire. There, Ball met Jay Witcher, a former aerospace engineer turned master craftsman of folk harps.

The 32-string, four-and-a-half-octave instrument, which dates back more than a thousand years, is gracefully carved from wood, strung with brass wire, and plucked with the fingernails--characteristics that lend it a considerably different tone than that of its concert cousin.

Over the years, Ball has recorded several albums of Celtic harp music. His 1983 debut, Celtic Harp I: Music of Turlough O'Carolan, showcased the works of the Irish musician who has become his muse. Indeed, much of Ball's concert and recorded material has drawn heavily from the poignant songs of O'Carolan, the blind Irish bard who roamed the rugged countryside on horseback.

"O'Carolan was influenced by the Italian and Baroque musical influx that swept Ireland at the turn of the 18th century," says Ball, who used O'Carolan's songs for the 1987 score of The Ugly Duckling, a Windham Hill/Rabbit Ears children's recording narrated by Cher. "One of the reasons I learned to play the harp was so I could play his music."

Five years ago, Ball paid homage to O'Carolan again in the one-man play O'Carolan's Farewell to Music, which Ball co-wrote with Peter Glazer, the writer and director of Woody Guthrie's American Song. Variety magazine hailed the play as "a small gem."

Ball's new compilation CD, Music on the Wind: Selected Pieces, 1983-2003, gathers many gems of Irish wit and charm from throughout his career. "It's an art form, in a way," he says. "But it's also just simple human exchange. What I've always liked about it is that there's an intimacy and a directness, which is good theater if nothing else.

"I don't feel as though I have any particular message. It's simply the charm of what used to be a common occurrence."