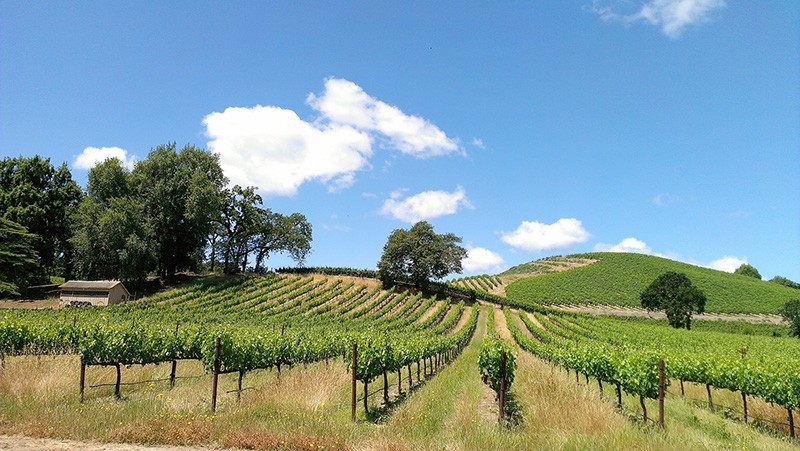 Joe Wagner, 33, is the son of Napa Valley winemaker Chuck Wagner, and he sounds like a man who believes in doing the right thing.

But Wagner's proposal to build a huge new winery, distillery and events center at Dairyman ranch off Highway 12 near Sebastopol led to a groundswell of opposition when he announced it last February.

The proposal so inflamed local residents that Padi Selwyn cofounded an advocacy group to fight it. The organization, Neighbors to Preserve Rural Sonoma County, has 1,200 followers on Facebook at last count.

Selwyn is a marketing consultant who helped start the National Bank of the Redwoods. She says she has nothing against wineries, and nothing against development per se, but with 500 wineries in the county and an unceasing push for more of them, she says, simply, "Enough is enough."

Have we reached "peak wine" in Sonoma County?

Wagner's intentions reflect a growing commitment to greater sustainability being promoted by wine industry–supporting organizations such as Sonoma County Winegrowers. But critics say it's all talk, no sustainability.

Earlier this month, the organization ran ads in local media outlets, including the Bohemian, to promote its sustainable practices, and the response was as quick as it was ferociously dismissive. Critics included former Sonoma County supervisor Ernie Carpenter, who accused some wineries of green-washing environmental impacts in an opinion piece in the Press Democrat. Wagner is not a member of the trade group.

"The advertisement we published in local newspapers in the county was paid for by local Sonoma County wine-grape growers who are proud of our sustainability program and want to share the effort with the local community," says Sean Carroll, director of marketing and communications for Sonoma Winegrowers. "No public funds or grant money was used."

Still, the ad rankled some residents who see Sonoma County transforming into a wine-soaked Disneyland for tourists.

And the Dairyman proposal, Selwyn argues, represents the worst of the transformation: wrong size, wrong place, wrong time. Wagner's plan is to produce 500,000 cases of wine and 250,000 cases of apple brandy a year, on a 68-acre parcel. That will mean many tanker trucks and the traffic that comes with them, since Dairyman can only grow a fraction of the necessary fruit on-site.

A proposed driveway at the new winery would cross the popular Joe Rodota Trail, used daily by hundreds of cyclists and pedestrians.

The proposed events center has drawn the most ire from critics, who speak of unpermitted food service, traffic congestion, drunken drivers making the roads unsafe, and negative environmental impacts on the Laguna de Santa Rosa.

Through its advertising and sympathetic tourism bureaucracy, Big Wine continues to push the mythical image of the small family winery, even as Wagner, for example, just sold his Meiomi label to Constellation Brands, a giant out-of-state company, for $315 million.

Wagner says he was surprised by the pushback to his proposal, but has agreed to do an environmental impact report to mollify his critics. He says he wants to answer everyone's questions about his proposal, and doesn't want "there to be people who think this is a bad deal."

Wagner says his proposal is a great use of the property—an "old dilapidated dairy that is going to go from industrial to light-industrial agricultural use."

The proposed turn-off onto Highway 12 east of Llano Road is one of the reasons he bought it. "It's a main thoroughfare, it's not a county road," Wagner says. The property has been used for concrete pumping and gypsum mixing, so "it is not suitable to be restored to its natural habitat," he says.

Wagner bought the property for $4.5 million to provide a home for his higher-tier Belle Glos label and research and development projects. He expects to grow 6,500 grape vines on the site and will use tertiary treated wastewater from the county for irrigation. They'll recycle wastewater on-site.

"The technology that's been coming out over the last decade has been phenomenal" for water reuse, says Wagner. Water for winemaking will be pumped from wells.

Wagner contested an oft-repeated criticism of winemaking's strain on water supplies—that it takes 30 gallons of water to make a glass of wine. More typical is six to seven gallons to produce a single gallon of wine, says Wagner, who adds that he has "brought it down to lower than two gallons."

Regardless, residents are increasingly asking a question that transcends Wagner's plans: How many wineries are too many?