Pesticide Use in Sonoma County 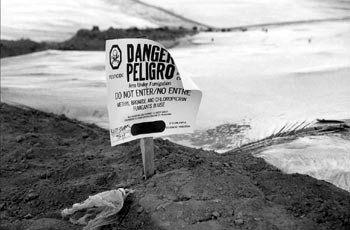 Sign of the Times: Notice warns of methyl bromide use in a local vineyard.

Pesticide use on the rise

A PUBLIC-INTEREST group announced Sept. 18 that statewide pesticide use is on the rise, but farmers and state regulators claim consumers have nothing to worry about. In the report "Rising Toxic Tide, Pesticide Use in California, 1991-95," Pesticide Action Network scientist James Liebman found that in that five-year period pesticide use increased 31 percent, from 161 million to 212 million pounds of pesticide-active ingredient.

In Sonoma County, where an average of 49 pounds of toxic active ingredients were applied per harvested acre, the intensity of pesticide use ranked sixth among all counties in California at nearly twice the state average.

But California Farm Bureau spokesman Clark Biggs says PAN "conveniently" chose 1991 as a starting point because it was near the end of an eight-year drought and farm acreage was relatively lower than subsequent years. The state Department of Pesticide Regulation released a 1995 pesticide-residue report the same day, finding no trace of pesticide residue in 64.6 percent of 5,502 marketplace samples. The state report found pesticides below the legal limit in more than 33 percent of the samples and notes that about 1.6 percent of the samples contained illegal levels of pesticide. Department director James Wells says, "This [state] report indicates a high level of grower compliance with pesticide laws and regulations."

But PAN says that's not good enough. According to its report, the use of cancer-causing pesticides increased 129 percent between 1991 and 1995. Gregg Small, director of Pesticide Watch Education Fund, says, "California should be at the cutting edge of sustainable agriculture and promoting non-toxic approaches to pest control. Instead, we find our state agencies doing very little to reduce the use of pesticides."

As a result, the widespread use of toxic agricultural chemicals damages both human health and the environment, PAN claims.

"This is not surprising because pesticides are created to be poisons," the report notes. "Epidemiological studies have shown an association between pesticide use and increased numbers of birth defects among both farmer and non-farmer residents of agricultural regions."

The report adds that 1,000 cases of acute occupational illnesses linked to agricultural pesticides are reported each year in California. And recent studies have focused on the role of many pesticides in disrupting hormonal balances in wildlife and humans.

PAN found that of all the crops in the state, grapes--including those cultivated for wine and raisins--receive the most pesticides: 59 million pounds in 1995, of which 49 million pounds were sulfur. The PAN report notes that while sulfur is not a systemic poison, it is acutely irritating to the skin and eyes, and is the pesticide causing the most reported worker injuries in California.

Despite a plan to phase out the use of methyl bromide--a powerful fumigant widely used in the local grape-growing industry--the amount of the controversial chemical used in cultivation actually increased, from 14.7 million pounds in 1993 to 17.5 million pounds in 1995.

A 1995 Lake Research public-opinion poll showed that that trend runs counter to popular views about pesticide use: 79 percent of Californians believed it is important to reduce pesticide use, and 87 percent favored labeling foods to describe pesticide residues.

But toxicologist Carl Winter, at the University of California at Davis, says the most important point to consider is not the frequency and overall amount of pesticide usage but the amount of consumer exposure. "Almost any chemical is toxic at a certain dosage. The dose makes the poison," Winter says.

His department has found no major health risks posed by eating state produce, he says, adding that he hopes consumers do not shun fresh fruits and vegetables because of the report's findings. The largest potential health risk confronts the workers who handle the highly concentrated pesticides in the field, he concludes.

Still, PAN is calling for fewer pesticides and more public access to information about the extent of their use. Currently, the state Department of Pesticide Regulation is supposed to keep accurate and accessible reports on the use of agricultural chemicals. According to the report, Gov. Pete Wilson and pesticide manufacturers have been trying to cut in half the state mill tax that funds a large portion of the DPR's $25 million annual budget. "Such a serious cut in the DPR's budget will seriously compromise the agency's ability to track, let alone reduce, pesticide use in California," the report concludes.

PAN wants the DPR to produce annual reports detailing and summarizing pesticide use in the state by crop, by county, and by toxicity. It wants the state agency to create an easily accessible Internet database on the use of particular pesticides on particular pieces of land, so you'd know exactly what is being applied in your neighborhood.

"Practical, viable alternatives to toxic pesticides do exist," the report concludes. "For example, organic production is the fastest growing sector of U.S. agriculture. The organic food sector has grown 20 percent a year over the past seven years and now accounts for $3.5 billion in annual sales.

"Although we do not expect all of California agriculture to convert to organic production overnight, the success of organic producers demonstrates that it is possible to create a thriving agricultural economy without using toxic chemicals."