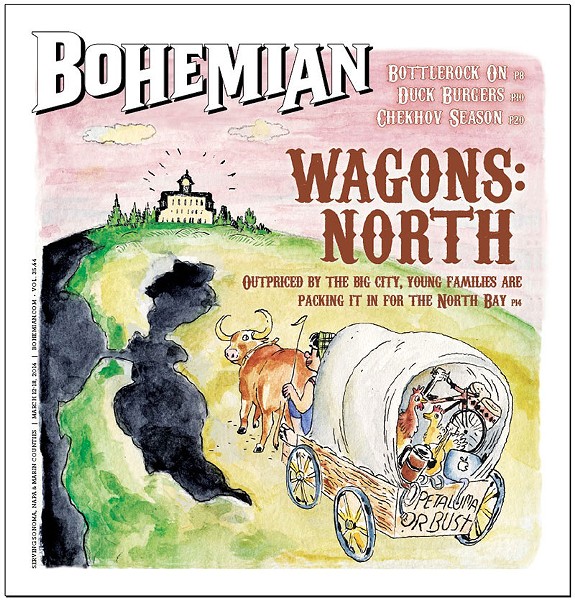 The Miwok called it "Péta Lúuma." The Spanish reduced it to "Petaluma." I tried to get "Lumaville" to stick when "P-Town" seemed to be gaining ground, only to have the annual bumper crop of teens rechristen it "Deadaluma," just like always. Now, if anecdotal reports prove true, a sizable influx of thirty- to forty-somethings from San Francisco and the East Bay are moving to Petaluma who simply call it "home."

"I hear the story almost every day," says Natasha Juliana, owner of WORK, a co-working space in the city's downtown. "It's gotten comical. Especially young families with young kids and parents in their 30s and 40s. They're coming from San Francisco, the East Bay, and even farther away, like New York and Chicago," she says. "And then we also see a lot of people who grew up here, went away for a long time, had children and have moved back."

What Juliana hasn't seen are people younger than 30 moving to Petaluma. "There are very few twenty-somethings," she observes. This stands to reason, since it's traditionally the twenty-somethings, like my younger self, that flee the suburbs and head straight for the cities.

I split from my native Petaluma 15 years ago on a self-imposed exile to pursue big-city ambitions, only to ultimately wish I hadn't. When my wife was enticed to leave her natural foods company marketing position in the East Bay to take one in Sonoma County, it meant we could move to Petaluma. I could repatriate to my home town. But, as anyone with any years on them will tell you, where you grow up is a time, not a place. Petaluma is barely recognizable to me. Now it's so much cooler than when I was an angry young man—or at least I'm finally able to get over myself and enjoy Petaluma on its own terms.