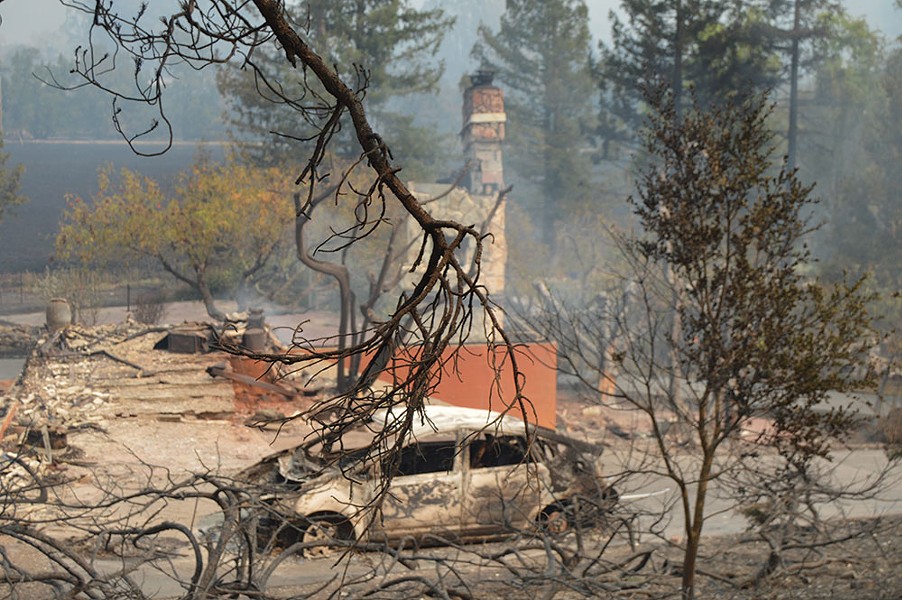 There were so many headlines around the country about PG&E's $1billion settlement with cities and counties last week, a casual observer might be moved to conclude that the utility's wildfire-related lawsuits were now behind it.

Not so. In fact, there's no guarantee that Santa Rosa or Sonoma County will ever see any of the $414 million that's part of the Sonoma Fire Complex piece of the settlement. And if they do, it won't be until 2020. Plus, the embattled utility is reported to be facing down some $30 billion in additional lawsuits brought by businesses, individuals and homeowners affected by the fires.

As the news broke officials in Sonoma County expressed cautious relief at the county's proposed but unspecified piece of the settlement. The $414 million figure for the North Bay was arrived at through mediation and will be divvied up between nine Sonoma and Napa counties and cities affected by the fires. The remainder is being directed at suits filed by Paradise and Butte County after last year's firestorms to the north.

The bottom line is that nobody knows who's getting what—that's yet to be determined—except that the lawyers will be paid 18 percent of the net from whatever winds up in Sonoma's coffers, according to the county's contract with the law firms.

Despite the uncertainty surrounding it, the settlement announcement came at a salient moment where recovery efforts locally are faced with dwindling federal and state resources: Sonoma County had just been through a bruising budget season as it adopted a $1.78 billion budget for fiscal year 2019-20 that slashed jobs and fretted over its property-tax shortfall that's an ongoing legacy from the 2017 wildfires.

Some 92 county positions were on the chopping block (the county managed to restore all but 40 of the proposed cuts) during this year's round of budget talks, and in a press release, the county noted that it was continuing to pursue state money to "backfill property losses after experiencing a loss of over $200 million from the disasters experienced over the last two years."

After footing the bill for cash-strapped counties and cities for two years, continued property tax backfill from the state is not part of the state's final 2019-2020 budget, and if any final settlement is arrived at, it won't be until mid-2020 that any regional city or county can use their share of the PG&E settlement to shore up local budgets or address the ongoing hole in their property-tax collections.

In the meantime, Sonoma County Supervisor David Rabbitt pledged to look for grants and seek reimbursement for the lost property tax income from the state and federal government, "but we must plan as if we are not going to receive any assistance," he stressed in a statement that attended the county's budget release two weeks ago.

Meanwhile, the timing of the mediated settlement announcement was a portent of good news for cities and counties with big holes to fill in their wildfire-related budget shortfalls, but was it telling? Sonoma County is not alone as cities around the region just now releasing their budgets and fiscal projections for next year and their annual financial reports from last year. Santa Rosa's 2018 City Annual Financial Report (CAFR) signals its concern over the potential for lost property-tax backfill starting in 2019.

The proposed-but-by-no-means-finalized $1 billion settlement made headlines far and wide, but the national-headline-machines did not crank up in similar fashion at news late last week that a proposed emergency fund to help utilities in California deal with future wildfires, to be funded by PG&E and its shareholders, would include some contributions from PG&E ratepayers, under Gov. Gavin Newsom's draft wildfire recovery outline released last Friday.

Sen. Bill Dodd, one of the lawmakers who worked to sketch out the parameters of the proposed emergency fund, issued a statement late Friday that warned against putting too much burden on ratepayers to pay for wildfire damage in his wildfire recovery plan.

"The legislature has been working diligently on addressing wildfire risks, and I appreciate the time and thought Gov. Newsom has taken on this critical issue," says Dodd in a statement. "We look forward to carefully vetting the details of his draft and engaging in a collaborative process to develop a solution. My ultimate focus remains on protecting ratepayers from undue costs, ensuring victims are compensated and on improving safety for all Californians."

When it comes to the lingering property-tax conundrum, Dodd's office says the senator has been advocating for a continuation of the property tax backfill for Sonoma and Napa counties, which wasn't included in the state's 2019-20 budget. "We're continuing to push for additional support," says Dodd via email.

The Napa-based senator says the settlement reached last week was good news for cities and counties struggling to rebuild and provide services, but adds that "all victims of the wildfire caused by PG&E deserve to be compensated for their losses, and I hope PG&E will do the right thing and settle with the individuals who lost their homes as well."

According to a fire victims lawyer interviewed in the Wall Street Journal last week as the mediated settlement was reached, PG&E may be facing up to $30 billion in additional lawsuits, and not just from homeowners but potentially faces class-action suits related to negative health impacts from the deadly wildfires that scorched the North Bay and, for a few horrible days last summer, gave the Bay Area the unenviable position of having the worst air quality in the world.

To settle its suit with PG&E, the county leaned on a national law firm with a long history of litigation over asbestos and diseases that are said to be caused by the substance, including mesothelioma.

In February 2018, Sonoma County signed a contract with the law firm, Baron & Budd and two other fire-focused law firms, to represent the county and its agencies in litigation arising from the Sonoma complex Fires of October 2017. According to the contract, the litigation was "intended to insure that taxpayers and Sonoma County ratepayers do not bear the burden of the many millions of dollars of damages caused by the Sonoma Complex Fires." But the settlement last week only partially unburdens Sonoma County taxpayers. The contract stipulates that the law firms would be paid for their services if the suit was settled favorably for the county.

As part of the agreement with outside counsel, the county also hired two lawyers to deal with fire litigation and said it would expect that "a reasonable amount of County Counsel fees will be incurred to support the lawsuit against PG&E," and said it would be able to recoup up to $450,000 of county counsel expenditures "as party of any settlement."

The county budgeted $120,000 to pay for the additional lawyers brought on board to work the lawsuit and another $68,000 for work that had already been undertaken by the counsel's office. The contract with Blum and other law firms set a contingency fee based on 18 percent of any net settlement or recovery that the firm obtained for the county. That means the law firm will get nearly one-fifth of any settlement that comes Sonoma County's way.

The settlement is not settled yet. Santa Rosa and Sonoma County, along with seven other counties and cities, have only agreed to accept mediator Judge Jay Gandhi's proposed settlement. In a joint statement last week, officials from Santa Rosa and Sonoma County noted that the allocation of the $415 million had not been determined. Before any monies wind up in county or city coffers, the mediated agreement will be incorporated into a PG&E's Chapter 11 bankruptcy case. The settlement is contingent on the Bankruptcy Court confirming PG&E's reorganization plan.

Requests for comment from the Sonoma County counsel's office were directed to lawsuit point-person John Fiske at Baron & Budd. "It is in the best interest of the wildfire victim communities for PG&E to emerge from bankruptcy as soon as possible," Fiske says via email. "Communities cannot receive compensation unless and until PG&E is out. We hope all parties and lawyers can resolve disputes as efficiently as possible."

Local officials were meanwhile cautiously optimistic and relieved that help may be on the way to plug their fire-related budget holes, but nobody's counting their chickens just yet.

In a statement, Santa Rosa mayor Tom Schwedhelm gave an indication of where Santa Rosa's piece of the settlement might be deployed: "This agreement, if approved, will not only help support Santa Rosa's recovery, but also to aid in our ability to invest in resiliency measure that may better protect our community from future disasters."

The sentiment was echoed by Rabbitt, who said the county's piece of the settlement would be dedicated to fire-damaged roads, infrastructure and watersheds, "while protecting taxpayers.'