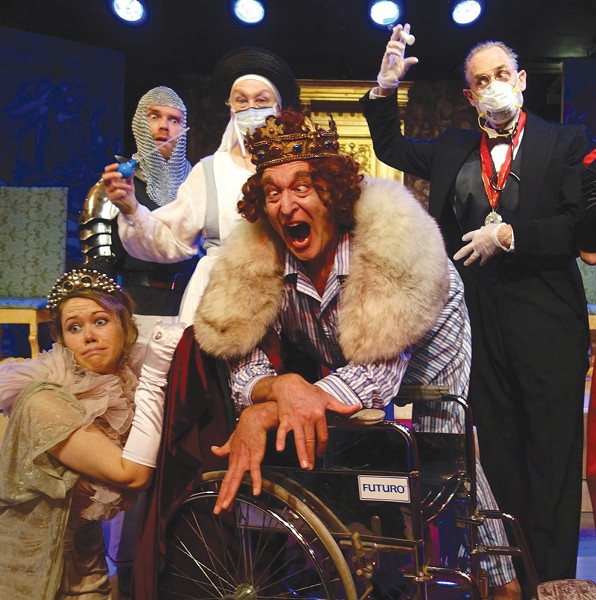 As if we North Bay residents didn't already have too many entertainment opportunities every weekend, local theaters are making it even harder to decide what to do with our spare time. This weekend, four different theater companies open four new shows. Rather than choose one to preview, I invited all four to send a note telling me what their show has to offer that is unique and/or outrageous enough to deserve theatergoers' much-divided attention.

"Well, we make it rain, live onstage, for one thing!" writes Laurie Glodowski, director of Singin' in the Rain (June 14–July 7) at Sixth Street Playhouse, featuring Nick Chuba, Denise Elia-Yen and Trevor Hoffmann as Don, Kathy and Cosmo. The production, based on the beloved movie musical, features some of the best songs ever written, performed by a first-rate orchestra, and some pretty sensational tap-dancing. "And," Glodowski adds, "our Cosmo really can do that running-up-the-wall thing!"

At the Cloverdale Performing Arts Center, where the company is hard at work on Tennessee Williams' Night of the Iguana (June 14–23), director Jim dePriest admits that the appeal of the new production is at least partly educational.

"The local high school students and their teacher loved the idea of seeing this work by one of our greatest playwrights," he says. DePriest also suggests that audiences will be impressed with the technical and visual detail of the play, about lost souls seeking a second chance at a run-down hotel in Mexico in the 1940s. "Scenically," dePriest says, "we are producing the script with as much realism as possible."

With Eugene Ionesco's Exit the King, running June 13–30 at Main Stage West, director Beth Craven gives the strength of her show's performances as the chief reason to check out the rarely performed end-of-the-world absurdist romp. It is, she writes, "a master acting vehicle for its main character, King Berenger, played to the hilt by playwright and solo performer Fred Curchack. It is one of the few plays that Fred admits he's always wanted to perform in. This will be a highly memorable moment in our regional theater."

The cast is also a big part of the appeal of Martin McDonagh's Lonesome West (June 13–30), presented at the Sonoma Community Center by Narrow Way Stage Company.

"The story centers around Valene and Coleman, two Irish brothers," says director Chris Ginesi, "and we've cast Nick Christenson, our artistic director, and Jon Christenson, Nick's brother in real life. Jon is bringing a fire from deep within him, and the explosive back-and-forth between him and Nick is absolutely riveting."