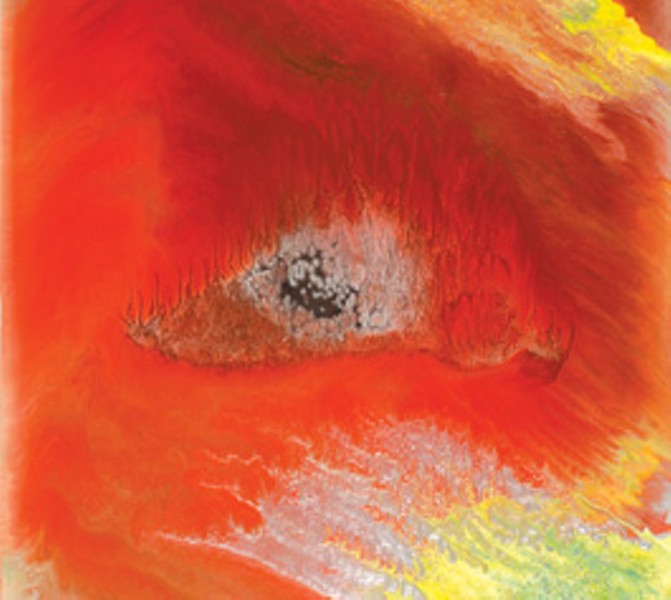 Mickey Hart was never just the drummer for the Grateful Dead. In the past few decades, Hart, who hangs his hat in west Sonoma County, has worn many. He's been an focused solo recording artist, in particular with the outstanding Planet Drum album. He's been an activist, most recently by staging a $5,000 contest to create an effective video in support of State Parks funding via Prop. 21. He's been an author, notably of drum bibles such as Drumming at the Edge of Magic.

Visual art hadn't much crossed his mind until his longtime drum tech Lawrence "Ram Rod" Shurtliff died, and that's when grief resulted in inspiration. A series of wood sculptures followed, with some watercolor gouache for good measure. Art shows followed. But Hart wasn't done yet. Now pouring paint à la Jackson Pollock (detail from The Foot of God, above), Hart's newest works elicit what he calls "the wonder of chaos and the flow—all the glorious symmetry in one."

It's fitting that Hart's first show of these new works is at Rockin' Roses gallery in Healdsburg, owned by artist and local legend Stanley Mouse. The creator of countless posters, album jackets and logos from the Bay Area's psychedelic age, including the iconic skull and roses for the Dead, Mouse last month christened his new space with works by Jefferson Airplane singer Grace Slick (through Nov. 23). With Mickey Hart up next, a theme seems to be developing. Next up: Owsley comes out of hiding for an exhibition of surrealist acrylics? One can dream.