If you can boil a potato, you can make potato salad 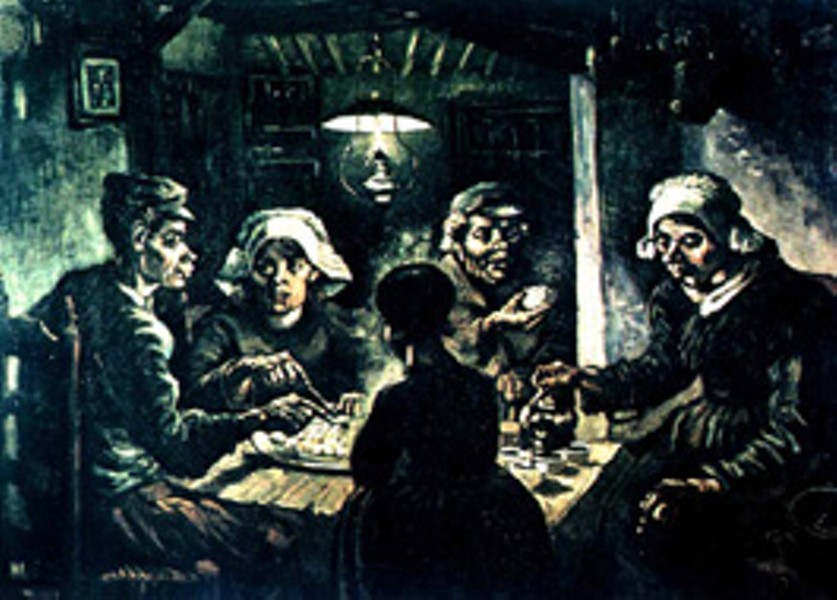 Potato salad is one of those unfortunate foods that all too often suffers at the hands of unsympathetic food-service workers. When was the last time you had really great potato salad at your neighborhood deli? So many things can go wrong: undercooked potatoes; overcooked potatoes; artery-clogging levels of gooey, flavorless dressing; excessive amounts of flavor-bludgeoning aromatics like dried dill or woody tarragon.

Once, I sampled potato salad from an otherwise exemplary barbecue outlet that served us cold, lumpy mashed potatoes swirled with mayo and scallions--some distracted prep cook probably boiled the potatoes into unrecognizable gruel late in the day and had no choice but to attempt, unsuccessfully, to salvage them.

We do not deserve to suffer so, and neither does potato salad. One of summer's dining delights, potato salad is easy enough to make at home that all of those wretched store-bought monstrosities in their plastic tubs can be forsaken forever. The best potato salads are simple constructions that allow the subtle, earthy flavor and texture of potatoes to come through, so likewise ignore recipes that read like baroque assemblages of ingredients. If you can boil a potato, you can make potato salad.

Correctly boiling a potato turns out to be a mite more involved than most folks figure; in fact, it shouldn't be boiled at all (more on that in a second). First of all, choose your potatoes carefully. Those starchy, burly tubers such as Idaho or russet potatoes are best suited to dry-heat cooking methods such as baking or frying--methods that convert their starch into sugar and yield crispy, fluffy, golden-brown results.

Compact, low-starch waxy potatoes are the best choice for boiling, because they absorb less water and maintain their shape better after cooking. Yukon Golds are always a good bet. For reasons of healthfulness and flavor, I prefer to buy younger, smaller, thin-skinned potatoes and leave the skin (and thus all of the nutrients) on. Another advantage in buying smaller potatoes--such as fingerlings--is that they require less cooking time and less slicing or dicing.

It turns out that "boiling" may be a misleading term in regard to potatoes. In cooking school, I had a chef-instructor with a barbed-wire voice who had no control over the excesses of its volume. He was fond of repeating important cornerstones of food preparation three times in his ear-shredding rasp. Thanks to Chef Delaplane, don't boil potatoes is forever engraved upon my inner ear. Instead, you should simmer potatoes, as cooking them in a churning froth of rapidly boiling water can damage their cell structure and yield a gummy, gluey result.

Place the potatoes (whole, if small enough) in a large pot and cover with cold water, adding generous amounts of salt. Bring them to a boil over medium-high heat and, once they reach a boil, immediately turn the heat to a hearty simmer (another Chef Delaplane decree: don't cover potatoes). The potatoes are done when easily pierced with fork (not something super-sharp like a paring knife, which will always easily pierce them). If in doubt, remember that everyone prefers overcooked potatoes to semiraw ones.

Chef Delaplane also stressed don't shock potatoes,/i>--that is, never cool a freshly drained boiled potato by running cold water over it (this rinses away the starch, creating yet more gluey goop). Besides, you want the potatoes to be warm when you dress them.

Most cookbooks suggest dressing the cubed, cooked potatoes while still warm. This helps to soften the acidic bite of components like wine or vinegar, but it also helps to penetrate the flesh of the potatoes with more flavor, allowing you to use less dressing.

The dressing defines the potato salad. There are two main categories: mayonnaise and nonmayonnaise. For purposes of brevity, we'll call mayonnaise-based "American-style" and nonmayonnaise "German-style" (even though some countries outside America very happily dress salad with mayo, and the nonmayo approach is hardly limited to Germany). American-style potato salad often includes sliced hard-cooked egg, pickle relish or chopped pickle, diced onion, sliced black olives or diced celery. Whatever the combination, it's always slathered with mayonnaise and best served slightly chilled or at room temperature.

German-style potato salad, meanwhile, if often served warm, dressed in with vinaigrette. The involvement of bacon and/or bacon grease can only improve matters. Whether pro-mayo or anti-mayo, it's highly unlikely that your guests are anti-potato salad.

In her 1999 book Julia and Jacques Cooking at Home, Julia Child recommends reserving some of the potato cooking water and tossing it with the warm cooked potatoes, a wonderful technique that results in tender, flavorful potato salad and allows you, if you so desire, to use a lighter hand with the mayonnaise. I've adapted it to this super-basic recipe. Naturally, you may add whatever garnishes--chopped hard-boiled egg, olives--you desire, but I prefer to keep it simple, selecting a few garnishes for color, texture and flavor variation. Keep in mind that the flavor of chives, scallions and chopped onion will increase as the salad is stored.

When I was growing up, we had German neighbors. Fred, the patriarch of the family, often brought his potato salad to the outdoor potlucks, where it was met with enthusiasm beyond whatever cut of meat lay overcooking on the grill. The German neighbors moved away, but not without my mother getting Fred's recipe. She sometimes makes this salad using gently warmed olive oil instead of the bacon grease, but--let this be a warning to those watching their waistlines!--it's never as good.

Utilize the Chef Delaplane method for cooking the spuds. Reserve 1/4 cup of the potato cooking water and drain the potatoes.

When cool enough to handle, coarsely dice or slice the potatoes and place them in a large bowl. Stir the vinegar into the reserved potato cooking water and drizzle it over the still-warm diced potatoes. Drizzle the reserved bacon grease over the potatoes and gently turn to coat. Add the crumbled bacon, red onion and chopped parsley, and season to taste with black pepper and lots of salt. Serve warm or at room temperature. Serves 4 to 6.