Queens and Kings of SF drag get royal reception in Napa

PQ: "If you have a problem with sequins and sparkles, you might want to avoid this one." 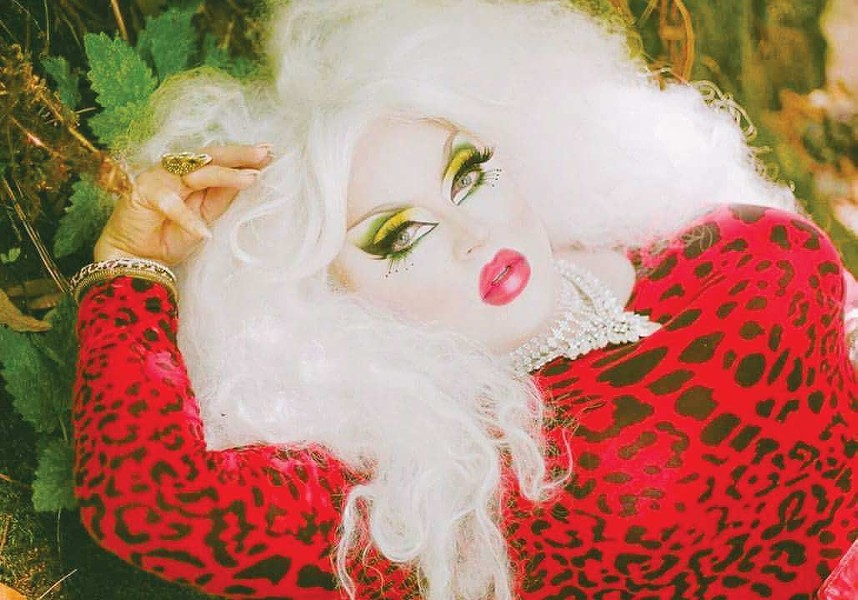 What if you threw a one-of-a-kind, totally fabulous, over-the-top drag queen extravaganza and no one showed up?

That was the biggest fear confronting Napa's Robert Doughty last year when he and his friend Dona Bonick decided to produce a massive pride week drag show as a benefit for Napa LGBTQ Connections. It would be a royal and rowdy showcase of the very best drag performers from San Francisco, and would end with a no-holds-barred dance party designed to shake the rafters and fill all attendees with love, joy, optimism and happiness.

And for good measure, the production—graced with the John Waters-esque title "Drag Queens of the Valley"—would be a fundraiser for LGBTQ Connections, a nonprofit founded in 2011 to provide an array of resources for Napa and Sonoma County residents in search of a stronger, wider, safer and healthier sense of community.

Still, Doughty admits that at times it felt as if they were taking a tremendous risk.

Rarely had a drag show of that size—10, high-profile queens and kings from the San Francisco drag community, all taking the stage at JaM Cellars Ballroom—had been produced in Napa. Sure, drag-themed events from bingo nights to church basement cabarets have been rapidly rising in popularity north of the Golden Gate Bridge, but producing a show of this size and caliber wouldn't be cheap, or simple.

"It's true. Last year, when we were putting it all together, we knew it would be a great show, and that it was for a good cause, and we promoted it all over the area, but we seriously didn't know if anybody would come to the crazy thing," says Doughty, best known by his stage name DJ Rotten Robbie. "We knew that with the popularity of 'Ru Paul's Drag Race,' the visibility of drag performance as an art from has never been higher. But was there a big enough audience in Napa for something like this? We thought there might be, but we really didn't know.

"And then," he says, "we ended up selling, like, 400 tickets. We had to turn away about 150 people, we raised over $6,000 for LGBTQ Connections, and we ended up winning an award for Best LGBTQ Event in this year's Best of the North Bay contest."

As a follow-up, not only are Doughty and Bonick producing round two of "Drag Queens of the Valley" this year, on Saturday, June 8, they'll be doubling the fun with the addition of a Sunday afternoon Drag Brunch and Pajama Party. Attendees are encouraged to come in pajamas, negligees, onesies, smoking jackets or any other appropriately sleep-related garb. During the brunch, catered by Alexis Baking Company, Doughty will be screening Saturday Morning cartoons and commercials from the '80s and '90s, hinting that brunchers could catch anything from classic Jackson 5ive and Scooby Doo cartoons to Thundercats, He-man and She-ra.

"So, basically, we're producing two shows for 2019, to try and see if we can double the proceeds for LGBTQ Connection," laughs Doughty. "This time, we're not worried about whether people will show up. The only question is how many people will we have to turn away this time. With two very different drag shows, though with the same talent at each, maybe we can spread it around. That said, I know a lot of people who are planning on seeing both shows, so who knows?"

Initially founded as a youth support group, with meetings at Napa's VOICES youth center, LGBTQ Connection has gown over the last nine years into a powerful nonprofit organization with a presence in Napa and Sonoma counties, and a wide scope of services and initiatives. Partly functioning as a hub for information of value to the Napa and Sonoma County LGBTQ community, the organization has also developed programs to encourage young leaders to create better awareness of and advocate for the needs of the many young and not-so-young queer residents of the North Bay.

"People who've never been to a drag show have no idea what they're missing," insists Doughty. "A modern day drag show is men and women of different gender identities dressing up as drag queens or drag kings. They each put on some kind of an outrageous act, some of them lip-synching to music and some of them actually singing. You'll see lots of incredible costumes, and some of the best drag performers you'll ever find, with spectacular names. In drag, your name is almost as important as your outfit. Seriously, our drag culture in San Francisco is some of the best in the world."

Hosting this year's show is the notorious Intensive Claire, known for her stunningly punk-gothic approach to drag performance. Known to sometimes throw food items into the audience, or to employ healthy amounts of fake blood in her act (she's very popular around Halloween), Intensive Claire will be introducing each of the shows' acts.

They will include the award-winning drag performer Vanilla Meringue (the alter-ego of professional make-up artist Joel King), plus the legendary Raya Light, along with the marvelous Coco Buttah, Vivvyanne Forevermore, Rock M. Sakura and more.

"If you have a problem with sequins and sparkles, you might want to avoid this one," Doughty says, adding that he and Vonick are holding one spot open for an up-and-coming Napa drag queen or king, who will be selected from scores of videos submitted over the last several weeks. "The queen or king we pick will get a chance to perform along with the other royalty. I'm not sure what will happen, but let's just say unpredictability is part of what a good drag show is all about."