Novato Theatre Company's 'Next to Normal' rocks like crazy 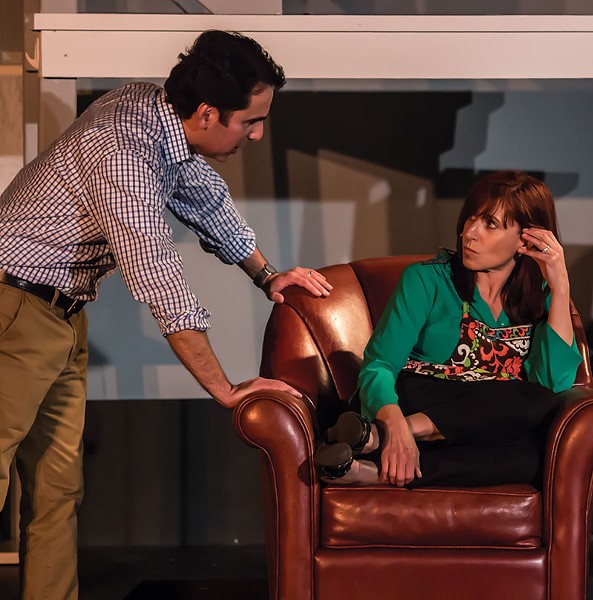 When I first heard the original cast recording of Next to Normal, Brian Yorkey and Tom Kitt's Pulitzer-winning rock musical about mental illness and pharmacology, I was knocked out by it.

A couple years later, when the touring production came to San Francisco, with original star Alice Ripley in the role that won her a Tony, I was underwhelmed by the phoned-in performances and slick blandness of the enterprise. But since my first impression came from listening to the album, I held firm to the belief that, under the right circumstances, Next to Normal could be as good onstage as it was in my headphones.

Turns out I was right.

Under the brilliant direction of Kim Bromley, Novato Theater Company's staging is intimate, accessible and raw—and the cast performs the hell out of the show. In Bromley's hands, the bombast of the touring production gives way to an understated yet intense experience, keeping the humor alive while never blinking in the glare of the play's harsher observations.

Diana Goodman (Alison Peltz) is a wife and mother who seems fairly typical as the play begins: a little bored with her life, amiably at odds with her teenage children, unable to sleep some nights but otherwise OK. Then, without warning, she has a full-on psychotic break, manically making sandwiches on the kitchen floor.

The episode is witnessed, with weary dismay, by her overachieving daughter, Natalie (Julianne Thompson), and her husband, Dan (Anthony Martinez), and we realize that this is not the first time Diana has gone around the bend.

After 16 years of daily medicinal treatment, her bipolar disorder is beginning to exhibit schizophrenic symptoms as well, and against the protests of her son, Gabe (Fernando Siu), Diana agrees to try a new doctor, the rock-star psychiatrist Dr. Madden (Sean O'Brien). It's part of the play's power that Diana's subsequent journey through a series of therapies—including electroshock, portrayed as a power-rock, dance-dream sequence—is treated with a stunning lack of judgment or preachiness.

These are real, identifiable people, and their pain—and biting sense of humor—is both highly relatable and deeply inspiring. The remarkably strong music, under the excellent direction of Lucas Sherman, is tight and rock-solid, carrying Next to Normal to its bittersweet ending on a powerful wave of sheer, beautiful, fully electric passion and power.