Singer/songwriter John Darnielle on 'War and Peace,' In 'n' Out and superstition in the studio. 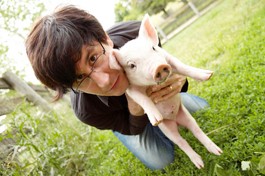 
Although it may not register as much of a blip on the general population's radar, it nonetheless gives a palpitating kick to announce that the Mountain Goats have been recording in our very own backyard at Cotati's Prairie Sun studios. To select in-the-know fans of the excellent band, this promises two things: a new album by the band's prolific songsmith John Darnielle, and, more importantly, a chance to spot him out cruising the produce section of Oliver's Market. Mountain Goats fans are diehards and wouldn't be above out-and-out stalking.

Darnielle's outstanding talents first came my way in the form of Tallahassee, a richly rewarding theme album about a down-and-out couple who buy a ramshackle Florida cottage in which to drink themselves to death. With an incisive knack for painting situational imagery, Darnielle crafts a world halfway between Raymond Carver and Joni Mitchell, singing in a detached, perceptive clip about the ultimate tragedy of faded love. It came out five years ago and still reveals new, sparkling intricacies with each listen.

I caught up with Darnielle in the middle of recording, and though it was hard to refrain from asking him obsessive questions about his new songs, I needn't have worried; Darnielle's "very superstitious" about talking about recording sessions while they're happening. As yet untitled, this is the band's third album recorded at Prairie Sun, and along with sheer familiarity, Darnielle cites the secluded farm life at the venerable Cotati compound as a recurring attraction. "It's rural, which I value—I don't want distractions when I'm working," he says. "I'm not a very social dude, I fear."

Opting instead to spend his free hours plowing through War and Peace ("A considerably better read than its reputation would suggest"), it's safe to say Darnielle won't be slamming whiskey sours and dancing on the pool tables at Red's Recovery Room anytime soon, and come to think of it, that's probably a relief to fans of his bookish charm and understated insight. "I'm guessing a lot of people like to relax and get loose when they're done with a day's work," he says, "but I like to try and keep my eyes on the road for 10 days straight."

No Washoe House? No Tradewind's?

"I went to In-N-Out Burger once for a grilled cheese sandwich," Darnielle offers, divulging the one temptation of the outside world with a siren song strong to lure him away from his 10-ton Tolstoy. "You may laugh," he admits, "but until you're an expatriate Californian, you don't really know what you're missing."