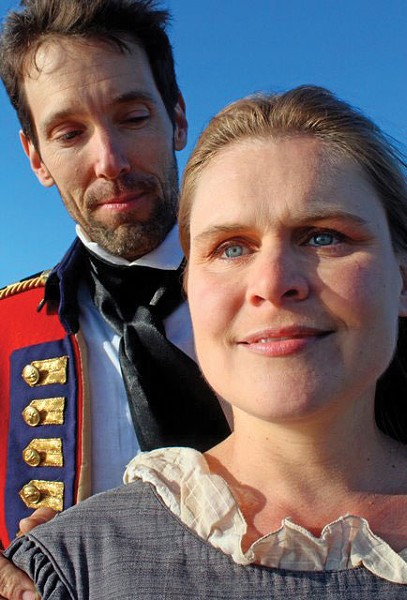 "One of the things that has made Porchlight Theatre special over the years," says actor, director and Porchlight co-founder Tara Blau, "is that we've never shied away from staging plays with large casts. For our current show, we have to populate a whole town. That's a luxury most companies don't have."

Next weekend, Porchlight launches one of its largest shows ever. Our Country's Good, by the celebrated British playwright Timberlake Wertenbaker, is an epic 1988 drama set in 1780 in New South Wales (which eventually became Australia). The sweeping story examines the relationship between several British naval officers, the first jailers of Britain's harsh Australian penal colony and an assortment of various prisoners, men and women, several of whom decide to stage a classic play to alleviate their boredom.

The play has 22 characters, roles that will be filled by 11 actors when Porchlight brings the show to the outdoor Redwood Amphitheatre at the Marin Art and Garden Center. The production is being co-directed by Ann Brebner and Blau, who first encountered the rarely staged play when she acted in a production while in graduate school in Denver.

"I fell in love with Timberlake's words and her story," she says. "I just loved it, and I never forgot it."

Not only does the play have a sprawling cast, requiring the kind of large-scale rugged set that works well for the Redwood Amphitheatre, the play itself is remarkably rich and entertaining.

"This is a play in which every character has a moment of transformation," observes Blau. "Everyone has an arc, which is an amazing thing." Now that she's directing the show she once appeared in, Blau sees it in a very different way. "When you're acting," she says, "you mostly just think of what is right for your own character, but as a director you notice all of them, you see the arc of the whole show and how all the characters' individual arcs fit together to tell the larger story."

And what a story it is, crammed with colorful characters, twists and turns.

"It's about what people go through when faced with hardships," says Blau, "but it's also about the power of theater and the spoken word. It's like an onion. It keeps exposing itself, layer by layer."