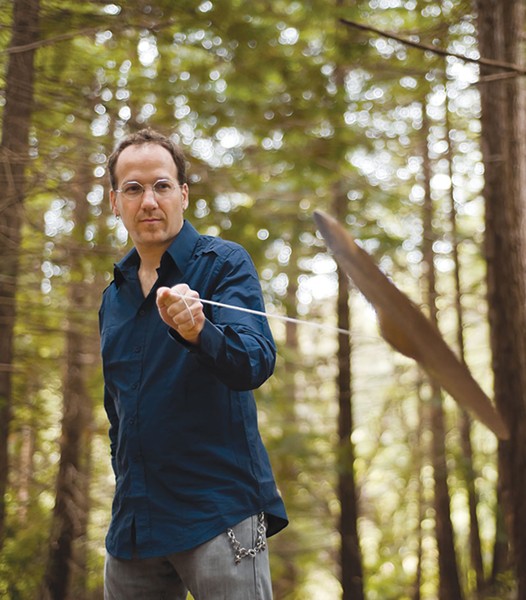 After 21 years, it's the drummer's turn.

A year after releasing an album of the guitarist's compositions, Bay Area jazz and funk duo Charlie Hunter and Scott Amendola's new album, Pucker, is comprised entirely of tunes written by Amendola.

Those in the know know that Hunter, playing custom, seven-string guitars, and Amendola, on a four-piece drum kit, don't hire other musicians to play at their gigs—it's just the guitarist and drummer up there, filling the void. It may sound like a bassist, rhythm guitarist and percussionist occupy the stage with them, but no, it's just two extremely talented musicians who've been playing together since Lollapalooza was new.

"For me, making a record is about writing music," Amendola says in a video about Pucker. "When you're younger, what you're listening to and what you're aspiring to musically, that evolves over time." But for a group whose music evolves so quickly, what does one call an evolution of evolution? Supevolution? Sounds delicious.

Amendola's grandfather, the jazz guitarist Tony Gottuso, also penned a tune on the record. When he and Hunter first started playing together, Amendola says, "I was kind of into guitar players of the day, and he was like, 'Yeah, that's cool, but check this out.' And he puts in this record and he plays this track and I go, 'Yeah, that's my grandfather.'" It was a song called "Satan Takes a Holiday," by John Cali and Tony Gottuso, from Pioneers of the Jazz Guitar.

For "Scott's Tune," his grandfather's composition for the new record, the duo decided to break it down from a large band orchestration to their own signature style. It sounds, fittingly, like a pioneering composition played by a pioneering duo—quickly identifiable as their own.

At live performances, first timers needn't be alarmed upon hearing so much sound from such a sparse stage. There are no backing tracks and no lip-sync tricks (it's all instrumental). There won't be any dancing or theatrics to distract from the music—the two guys will likely remain seated the entire time—but the concert won't feel boring. They might play a cover or two, but be aware that the night will consist mostly, if not entirely, of original compositions.

A tip on instrumental music: song titles are hard to remember with nary a word to jog the memory. Just sit back and enjoy it. Buy a record or two at the end of the show and hope for the best.