Queen of the Fright 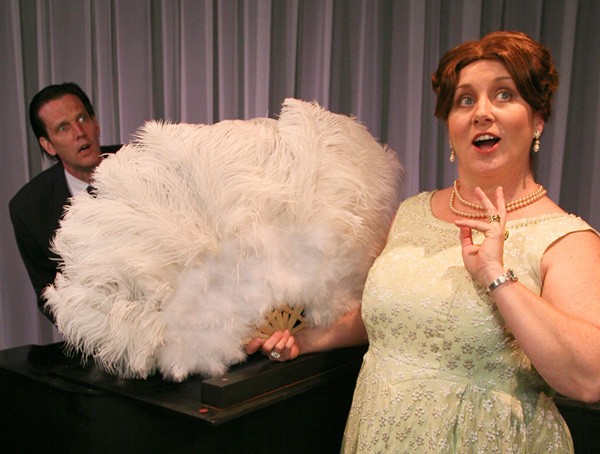 "You might find this hard to believe, but as a young woman, my singing was discouraged."

So says Madame Florence Foster Jenkins, the real-life subject of Souvenir, Stephen Temperley's sneaky little gem of a play now running at the Sixth Street Playhouse. It tells the story of how Jenkins, a wealthy New York society matron with a love of classical music and opera, became a certified celebrity in the 1930s and '40s. Convinced of her own singing skills, Jenkins performed annual classical recitals alongside her stalwart accompanist Cosme McMoon, and even sold out Carnegie Hall in 1944—despite her spectacular lack of pitch, tone and rhythm.

That Jenkins appeared to be unaware of her awfulness was a large part of her draw, and a matter of constant public speculation. Surely, she was in on the joke. Wasn't she?

In Souvenir, fluidly directed by Michael Fontaine, Temperley walks a surprisingly effective line between comedy and catastrophe, between ridicule and affection, focusing on the remarkable relationship between Jenkins (a superb Mary Gannon Graham, pictured) and McMoon (a delightfully comic John Shillington, who accompanies Graham on grand piano throughout the show). McMoon, with a mix of stricken disbelief and glowing affection, narrates the strange story of his former employer, about whom he clearly still feels a bit protective.

"Her folly was so stupendous," McMoon boasts at one point, "you have to admire its scale."

Throughout the play, Graham (Always, Patsy Cline; Shirley Valentine) perfectly captures the real Jenkins' supremely inaccurate vocal stylings—not an easy task. Toward the end of the show, Shillington gives a glorious, song-by-song description of the Carnegie Hall event, as Graham—wide-eyed with childlike excitement—appears in a series of outrageous costumes, performing snippets of everything from "Ave Maria" to "Praise the Lord and Pass the Ammunition." "Though you could hardly call the performance ideal," McMoon says, gleefully, "you could never say it didn't happen!"

Temperley's lovely climax allows us inside Jenkins' head, where we finally hear the music the way she always believed she was singing it. It's the perfect ending to a sweetly moving affirmation of the power of music, of judicious self-delusion and the glorious magic of true friendship.

Witness, if you dare, Florence Foster Jenkins' rendition of the 'Queen of the Night' aria: