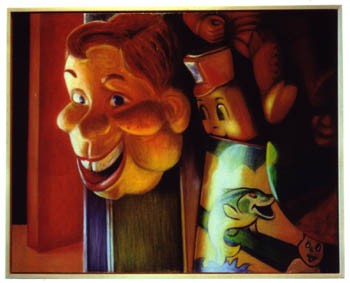 Quicksilver Mine Co. makes the move to Forestville

Khysie Horn is somewhat mystified by this whole concept of actually owning a parking lot.

She scrunches her nose a bit, slowly shakes her head and says, "Owning parking of all things, it's so . . . bizarre, don't you think?" She shakes her head a few more seconds and then continues on with the tour.

She's showing me around her building on Forestville's main road, to which she is relocating the Quicksilver Mine Co. from Sebastopol. The store, which carried some art in addition to all kinds of other products made exclusively in Sonoma County, will now be exclusively an art gallery. The grand opening celebration is Sunday, Aug. 24, 4pm to 7pm. The party also serves as the opening reception for the inaugural exhibit "Icons, Totems, and Fetishes," which features work from 37 regional artists.

Although owning six parking spaces out back confounds Horn, she seems oddly nonplussed by the thought of owning this 1,400-square-foot gallery space. Her easy demeanor is especially surprising, considering that she never really set out to become a gallery owner in the first place.

Horn's original dreams were more civic-minded--at least more directly civic-minded. For a while, she was going to graduate from school with a master's degree in higher education and social change. But the social changes that most readily sprang to mind had to do with local economy.

Horn tries to explain why it's a good idea for neighbor to buy from neighbor instead of buying from large corporations. She gives examples of how we end up paying a huge price in order to spend less money. But as with any complex issue that's given much thought, one concept flows to the next, and soon the words "money" and "freedom" and "responsibility" and "creativity" and "community" end up in the same pool of ideas.

"All of it is so intertwined that it's hard to explain," Horn finally says. "I guess I just find it important that communities help support their local artists, artisans, growers. And I would rather spend a little extra money and have something that has a story behind it, instead of buying something from a [big] box store."

So with those ideas in mind, Horn opened the first incarnation of the Quicksilver Mine Co. in Guerneville in 1983, selling only products that were made within the borders of Sonoma County. There were handmade items, local wines, clothes, and since artists are a part of the Sonoma County community, Horn started carrying some of their works as well.

When Quicksilver relocated to Sebastopol from Guerneville, Horn dedicated half of that space to showing the works of Sonoma County artists. In that capacity, she started meeting more and more artists, introducing them to each other, helping them find buyers and holding shows. She also spearheaded the popular Sebastopol Art Walk. In the process, she became one of the leading figures within the local arts community.

Horn had no formal arts education or training, but little by little she started picking up on the basics. Then some of the area's most respected artists, such as Don de Viveiros, Horst Trave, and Micah Schwaberow, among many others, took Horn under their wing and served as her mentors. Often when artists speak of gallery owners, it's with the same mix of respect and derision that many use when speaking of employers. Whenever I've heard artists talk about Horn, it's with the tone and words one uses to speak of a friend.

Slowly, the current of life led Horn to the decision to run a gallery. "When it came down to it, the part of the business I really enjoyed was my work with the artists," she says. "And I figured if I spent all that time and energy I was using on the shop and I put it toward the arts instead, well then maybe owning a gallery could really work."

If the career decision was something Horn drifted into, then the actual creation of the gallery was a goal that needed plenty of determination and drive.

Horn bought the Forestville building back in 2000, and the gallery is just now opening. It's been a tough few years. There were county permits to be acquired, grading problems to be solved, walls to be built, windows to be made. "My office in Sebastopol didn't have any windows," Horn mentions, "so I made sure that this time around I had plenty of natural light."

The end of my tour takes us out back to the garden in which Horn will display some outdoor art. "During the opening reception, we're going to have the Ben Hill Jazz Quartet playing out here," she says, nodding toward the garden.

Along with live music, oodles of art, and lots of interesting, artsy guests, there will be catered food and, if tradition holds, plenty of drink. Everyone knows that Khysie Horn knows how to throw a party. Well, everyone except for Khysie Horn.

"Oh God, the party part--that's the worst," she says rolling her eyes toward the heavens. "It's still hard for me. I get nervous days in advance of any reception. Afterwards, I have to be alone for quite some time just to recoup."

Horn, who relishes a sense of community, had spent a good deal of her life without it.

As an only child, Horn and her parents went on a long sailing voyage from the East Coast through the Panama Canal, and up through Tahiti, Fiji, New Zealand, and numerous ports along the way. Sometimes her parents would dock and her father would take odd jobs to support the next leg of their journey. But soon enough, the family would move on again. The trip ended up taking five years, from the time Horn was six until she was 11.

Horn remembers those five years as an interesting time, but somewhat lonely. At age 11, her family sailed back to the States, and Horn started sixth grade. "I was completely socially inept," she says. "I just didn't get it. On my first day of school, it took everything my dad had just to get a pair of shoes on me."

Horn grew up on the East Coast, and after visiting some friends who moved to Sonoma County, she decided to give the West Coast a chance. "I figured I'd stay here for a year," she says, "and see if I liked it." She did. The current eventually led to the Russian River and Guerneville, then Sebastopol. And now, through a rather meandering route, she's here in Forestville, the owner of an art gallery.

As the tour draws to an end, Horn turns away from her garden. "Well, here it is, my very own parking lot," she says.

As I pull out and drive away, I wave back at Horn, who's standing out on her parking lot, by her gallery, on her very own plot of solid ground.