Jonah Raskin is the author of 'Field Days: A Year of Farming, Eating and Drinking Wine in California.' 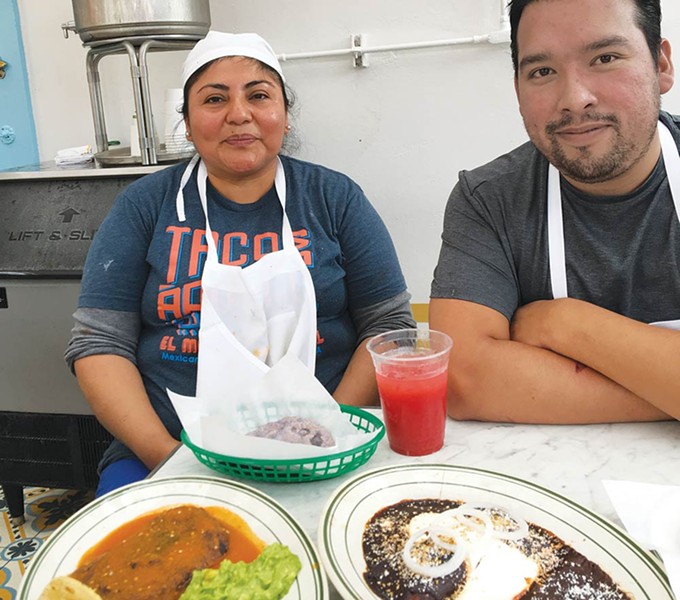 What's happening now, finally, is that people are beginning to realize that Mexican cuisine is one of the great cuisines anywhere in the world," says Karen Waikiki on the patio of El Molino Central in Sonoma. It's noon on a Friday and the parking lot is full and all the tables are taken.

"I never thought we would be as busy as we are," she says.

Zoraida Juarez, who comes from Oaxaca, prepares a red mole sauce, using a recipe she learned from her mother. Zoraidas's "Mother's Oaxacan Red Mole Chicken Enchiladas" is a popular dish on the menu. Intense, alert Jose Andrade, who comes from Guanajuato, is cooking one of his signature dishes, "Jose's Tacos De Birria Tatemada." It's made from roasted goat, and is also quite popular.

Like Jose and Zoraida, the dishwashers and the servers come from Mexican regions far apart. At El Molino, they rub shoulders, share regional cooking secrets and create new dishes with local ingredients.

"It's crazy in the kitchen," Andrade says. "People are talking, screaming and running, and we're all learning from one another. I learn from Zoraida and she learns from me."

Sometimes the Mexican cooks teach Waikiki and sometimes she teaches them, though she encourages them to do what they do best without her ideas, some of which are adapted from Diana Kennedy's unparalleled cookbooks. Waikiki studied in Mexico with Kennedy, who has educated generations of cooks about Mexican cuisine.

Right now, from Mexico City to San Francisco, New York and beyond, Mexican cooking is going through a transformation. Last year, three savvy New York restaurateurs opened Gran Electrica in downtown Napa and promised to serve "regional Mexican fare plus mezcal and tequila cocktails in a rustic-chic space with a patio."

With so many Anglos throwing their hats into the huge cauldron of Mexican food and cooking, American chefs, foodies and critics are asking why. After all, as Waikiki points it, "great Mexican food has been around for ages." It seems that Americans who have binged on French and Italian food want something new and different, casual and classy. Mexican food fits the bill.

Waikiki worries not only about what's really "authentic" and what's genuinely "traditional," but also about "appropriation," which is as controversial a topic in the world of cuisine as it is in the world of art and music.

San Francisco Chronicle food critic Soleil Ho recently published an essay in which she wrote of Keller's La Calenda, "I think it is certainly an example of culinary appropriation. And I think that's fine." Waikiki isn't so sure if it's fine or not.

"I'm part Swedish," she says. "If I made Swedish food no one would make a fuss, but since I'm not Mexican some friends have suggested that I ought not to be making tortillas, tacos and tamales, and also that I'm taking away something that ought to go to an Hispanic person."

If anyone has a righteous claim to traditional Mexican cooking it ought to be Waikiki.

"I have very distinct food memories of Mexico," she says. "I prefer not to use the word 'authentic' to describe the Mexican food we make at El Molino, but rather to use the word 'traditional.'"

She studied at Otis College of Art and Design in Los Angeles and later began to spend time as an intrepid traveler in Mexico. She's gone back again and again to listen, eat and learn in nearly every region, each with its own traditions and culinary styles.

Forty years ago, Waikiki began to cook in local Mexican restaurants. Nine years ago, she opened El Molino Central, which took Mexican food beyond the conventional platters served with rice, beans and enchiladas smothered in a red or a green sauce.

Waikiki hasn't visited Keller's La Calenda, and isn't planning to, but Jose ate there soon after it opened and came back shaking his head. He knows what he likes best and what he likes are his own dishes: potato tacos, an Asian-style chicken called "pollo oriental," and a Yucatecan salsa called sikil pak that's often made with roasted pumpkin seeds and that's sometimes called Mayan hummus.

Waikiki thinks nearly all stories about food are also stories about culture, and that cultures that borrow from one another are among the most appealing the world over. More than 500 years after Columbus sailed across the Atlantic, it's not easy to say with absolute certainty: "this is European" and "that's Latin American or Mexican."